Quake risk to US reactors worse than once thought 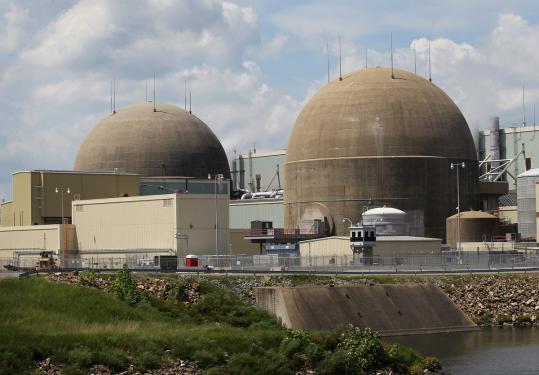 Shaking from the largest earthquake to hit Virginia in 117 years appeared to exceed what the North Anna nuclear power plant northwest of Richmond was built to sustain. (Scott Olson/Getty Images)
By Dina Cappiello and Jeff Donn Associated Press / September 2, 2011

WASHINGTON - The risk that an earthquake would cause a severe accident at a US nuclear plant is greater than previously thought, 24 times as high in one case, according to an Associated Press analysis of preliminary government data. The nation’s nuclear regulator believes a quarter of America’s reactors might need modifications.

The threat came into sharp focus last week, when shaking from the largest earthquake to hit Virginia in 117 years appeared to exceed what the North Anna nuclear power plant northwest of Richmond was built to sustain.

The two North Anna reactors are among 27 in the eastern and central United States that a preliminary Nuclear Regulatory Commission review has said may need upgrades. That is because those plants are more likely to get hit with an earthquake larger than the one their design was based on. Just how many nuclear power plants are more vulnerable will not be determined until all operators recalculate their own seismic risk based on new assessments by geologists, something the agency plans to request later this year.

The NRC yesterday issued a draft of that request for public comment.

The review, launched well before the East Coast quake and the Japan nuclear disaster in March, marks the first complete update to seismic risk in years for the nation’s 104 existing reactors, despite research showing greater hazards.

The NRC and the industry say reactors are safe as they are, for now. But e-mails obtained in a more than 11,000-page records request by the Associated Press show that NRC experts were worried privately this year that plants needed stronger safeguards to account for the higher risk assessments.

The nuclear industry says last week’s quake proved reactors are robust. When the rumbling knocked out off-site power to the North Anna plant in Mineral, Va., the reactors shut down and cooled successfully. The quake also shifted about two dozen spent fuel containers up to four inches, but Dominion Virginia Power said yesterday that all were intact.

Still, based on the AP analysis of NRC data, the plant is 38 percent more likely to suffer core damage from a rare, massive earthquake than it appeared in an analysis 20 years ago.

That increased risk is based on a bigger earthquake than the one last week. Richard Zuercher, a spokesman for Dominion, the plant operator, says the earlier estimate “remains sound because additional safety margin was built into the design when the station was built.’’

The safety cushion would shrink, though, if the plant’s risk is found to be greater.

Federal scientists update seismic assessments every five to six years to revise building codes for some structures. But no similar system is in place for all but two of the nation’s 104 reactors.

The exception is Diablo Canyon in earthquake-prone California, which has been required to review the risk of an earthquake routinely since 1985. The NRC does not require plants to reexamine their seismic risks to renew operating licenses for 20 years.

After the March earthquake in Japan that caused the biggest nuclear crisis since Chernobyl, NRC staffers fretted in e-mails that the agency’s understanding of earthquake risk for existing reactors was out of date.

In a March 15 e-mail, for example, an NRC earthquake expert questioned releasing data to the public showing how strong an earthquake each plant was designed to withstand. The seismologist, Annie Kammerer, acknowledged that recent science showed stronger quakes could happen. “Frankly, it is not a good story for us,’’ she wrote to agency colleagues.

Kammerer’s boss, Brian Sheron, who heads the NRC’s Office of Nuclear Regulatory Research, wrote in a March 14 e-mail that updated numbers showed the government “didn’t know everything about the seismicity’’ in the central and the eastern part of the country.

“And isn’t there a prediction that the West Coast is likely to get hit with some huge earthquake in the next 30 years or so? Yet we relicense their plants,’’ he wrote.

The NRC flagged the 27 plants for possible upgrades by calculating the likelihood of a severe accident based on 2008 hazard maps from the US Geological Survey and comparing it with the seismic risk estimated in 1989 or 1994. Those data were used the last time existing reactors evaluated their earthquake hazards.

The NRC identified the 27 reactors with the greatest risk increase but did not provide the risk numbers. The AP used the NRC’s data and methodology to calculate the risk increase for each reactor.