Obama may back fallback plan 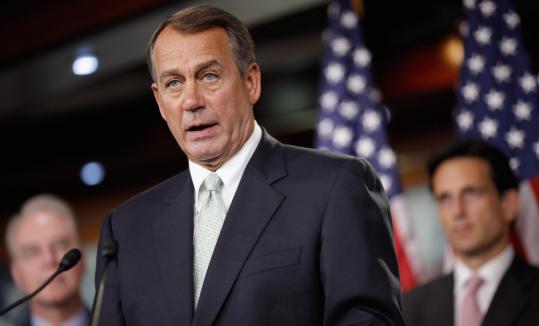 WASHINGTON - With talks on a big budget deal locked in stalemate, congressional leaders turned yesterday to negotiating a fallback plan for raising the debt limit as President Obama and House Republicans intensified their efforts to win over public opinion for the long political battle ahead.

While neither measure will make it into law given opposition from Obama, Republicans are eager to reassure their conservative base that they are not backing down and that they will continue to press their case for vastly shrinking the government through the 2012 elections.

Obama signaled that he would support the fallback plan, based on a proposal from Senator Mitch McConnell of Kentucky, the Republican minority leader, which would defer the bigger budget fight but allow for the debt limit to be raised.

But the president used his third news conference in two weeks to call again for a “big deal’’ of up to $4 trillion in 10-year savings from spending cuts and tax increases on the wealthy and corporations. And he claimed to have public opinion - including a majority of Republican voters - on his side in calling for tax increases to be part of the solution.

Such a deal seemed out of reach; Republicans refuse to consider the tax increases, and without them Obama will not agree to deep future reductions in Medicare.

But top presidential advisers - William Daley, the White House chief of staff, and Timothy F. Geithner, the Treasury secretary - were on Capitol Hill to meet with Speaker John Boehner, an Ohio Republican, given Boehner’s continued interest in some deficit-reduction compromise despite resistance from many House Republicans.

Publicly, Boehner gave no hint of accord.

“We’re in the fourth quarter here,’’ he said at a news conference, adding: “We asked the president to lead. We asked him to put forward a plan - not a speech, a real plan - and he hasn’t. We will.’’

Both sides are eager to avert an economic and political crisis, and the blame that would go with it, if the government breaches a $14.3 trillion borrowing ceiling on Aug. 2.