Some in GOP say president overstates risk of debt default 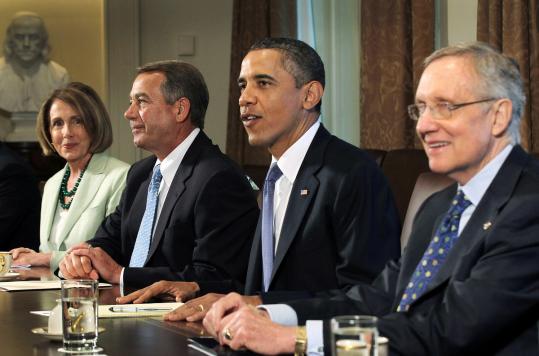 WASHINGTON - President Obama urged Republicans yesterday to stand up to political pressure and agree to tax increases as part of a far-reaching deal to prevent a government default. But House Speaker John Boehner refused to budge, as some conservatives in the House asserted the White House was exaggerating the risk of a default.

The president has proposed eliminating subsidies for oil companies and tax cuts for the wealthiest 2 percent of Americans in exchange for deep spending cuts demanded by the GOP, including to Medicare. The deal would be made to enable a vote allowing the government to meet its debt obligations.

“We might as well do it now - pull off the Band-Aid; eat our peas,’’ Obama said, explaining his demand that lawmakers think long-term and not settle for a stopgap, small-scale deal that would soon have to be revisited. “Now is the time to do it. If not now, when?’’

Higher taxes, however, are unacceptable - in a deal of any length, Boehner countered. “The American people understand that tax hikes destroy jobs,’’ he said.

The two sides met for nearly two hours at the White House yesterday afternoon, the third upper-level meeting in five days, but there appeared to be little progress. They are scheduled to meet again this afternoon.

Complicating the showdown are some Tea Party conservatives who believe the threat of defaulting on the debt has been overblown by the Obama administration; other Republicans argue that political brinkmanship is the best way to shrink government.

The nation is set to exceed the $14.3 trillion cap on borrowing, and unless Congress raises that limit by Aug. 2, Treasury Secretary Timothy Geithner has suggested his agency’s ability to pay Social Security and other benefits could be in jeopardy.

In addition, any delay in paying off Treasury bills to investors would raise interest rates the government must pay on its debt, economists contend, costing the nation tens of billions of additional dollars.

Adam Brandon, spokesman for FreedomWorks, a Washington group founded by former House majority leader Dick Armey that has helped nurture the Tea Party movement, estimated that about 50 Republicans in the House and some in the Senate would be willing to let the Aug. 2 deadline pass without raising the debt limit.

“These guys are not going to roll over on this one. They may go to the [mats], and I expect them to. That’s why that complicates things for Boehner - he can’t count on the old coalitions,’’ Brandon said. “The Tea Party class that got elected was serious when it said enough is enough.’’

Representative Steve King of Iowa, a prominent member of the House Tea Party Caucus, said the deadline should not intimidate deficit hawks.

“I’m more concerned if we’re too afraid of it,’’ King said yesterday. “I went through the farm crisis in the ’80s. Our bank closed. I paid my help first. . . . I paid the interest at the bank second, and the principal third, and I fed myself last. We can do something similar here and take some of the leverage away from the president.’’

Representative Allen West, a Florida Republican elected last fall with strong Tea Party support, also is not convinced that missing the August deadline will be a problem.

“I do not believe August 2d is a hard deadline; it’s simply the start of summer recess. I have heard three different dates since I’ve been up here,’’ he said in an e-mailed statement.

Both Boehner and the GOP’s leader in the Senate, Mitch McConnell, have acknowledged the nation needs to raise the debt limit, but they are seeking a deal focused on cuts.

The president revealed yesterday that he had been speaking privately with Boehner about a potential agreement that would have raised the debt limit while cutting $4 trillion from the rise in the expected federal deficit. Most of that money would come from spending cuts. But those talks broke down Saturday when it became clear that rank-and-file members of the Republican caucus would not sign on.

Obama hinted that Tea Party and hard-line conservative politics that won Republicans the House in November may not be serving them or their leader, Boehner, well now.

“The politics that swept him into the speakership were good for a midterm election; they’re tough for governing,’’ Obama said. “And part of what the Republican caucus generally needs to recognize is that American democracy works when people . . . are willing to make some sensible compromises to solve big problems. And I think that there are members of that caucus who haven’t fully arrived at that realization yet.’’

Republican majority leader Eric Cantor of Virginia said the deal Obama referred to included more than $1 trillion in tax increases, a deal-breaker for most, if not all, GOP lawmakers.

The influx of freshman Republican lawmakers, propelled into office by Tea Party support last fall, has hardened the party’s stance on limiting government spending and on rejecting any legislation that hints of raising revenues.

Cantor referred repeatedly to the GOP’s “Pledge to America,’’ unveiled weeks before the elections in November and filled with key goals of Tea Party groups.

“Our members did not come here to raise taxes,’’ Cantor said. “Sprinkled throughout is our pledge not to raise taxes on the American people.’’

Some Republicans said the president’s suggestion that Tea Party politics are dividing the Republican caucus and hindering its ability to compromise are off base.

“I have a core belief that I’ve maintained that raising taxes doesn’t solve the problem,’’ said Representative Frank Guinta, a New Hampshire Republican who was elected with support from Tea Party activists. Guinta suggested that the talk of a divided GOP is a tactic of Obama’s.

But Brandon of FreedomWorks agreed with the president that Boehner has a difficult task in corralling his caucus.

“Boehner’s problem is Obama’s problem. Both of these guys are struggling with credibility when it comes to debt issues,’’ he said. “Every single debt vote has been a fait accompli. Because of the Tea Party, for the first time it isn’t. I think that’s a healthy thing.’’