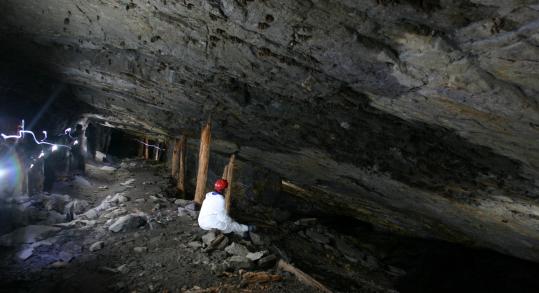 Since its discovery in 2006, white-nose syndrome has killed more than a million cave-dwelling bats in the United States. (Alan C. Hicks/File)
Associated Press / June 29, 2011

WASHINGTON — A devastating fungus that has killed off caves full of bats may be blamed for threatening the very existence of two bat species, the US Fish and Wildlife Service said yesterday.

The agency said it would launch a 90-day investigation into whether the eastern small-footed bat and the northern long-eared bat need protection under the Endangered Species Act. The two species are the first to be evaluated — and would be the first to be classified as endangered and threatened — because of white-nose syndrome.

Since its discovery in 2006, the deadly disease — named for the sugary smudges it leaves on noses and wings — has killed more than a million cave-dwelling bats.

State and federal agencies have taken steps to halt its spread, including barring people from caves.