3 N.E. Republicans bolt party on vouchers; Democrats say issue will help them in ’12 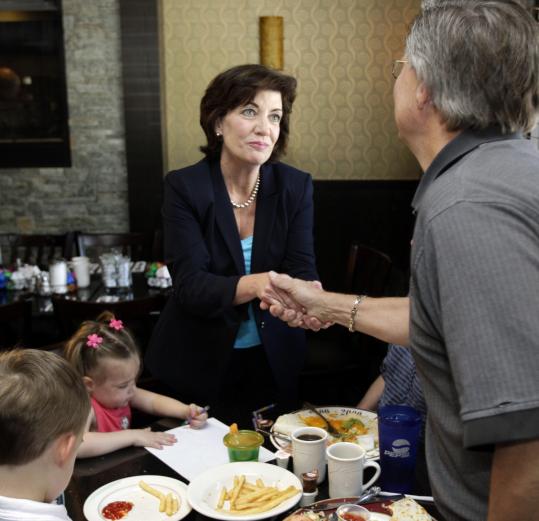 Democrat Kathy Hochul, thanking customers in a restaurant yesterday, won a special congressional election Tuesday in what had been a GOP stronghold in western New York. (David Duprey/ Associated Press)
By Theo Emery Globe Staff / May 26, 2011

WASHINGTON — Senate Democrats voted down a Republican budget yesterday along with its controversial plan to partially privatize Medicare, a vote that forced many GOP senators to endorse cuts to a popular program deeply valued by older voters.

The 57-to-40 tally, which Democrats said they would capitalize on in the 2012 campaign, came on the heels of another victory for them: In Tuesday’s special election in upstate New York, Democrat Kathy Hochul scored an upset by railing against the Republicans’ proposed Medicare overhaul.

The two events were cast by celebratory Democrats as a shift in the national political winds, a small political comeback after the drubbing they suffered in the 2010 midterm elections.

“The Republican House-passed bill would have devastated Medicare, changed it the way the American public didn’t want it to go,’’ said Senator Patty Murray of Washington, chairwoman of the Senate Democrats’ 2012 campaign efforts. “The vote in New York [Tuesday] showed that the American people don’t support this. The vote today shows that we don’t support it.’’

The 2012 budget that House Republicans approved along party lines last month contained deep cuts and would have transformed the government-run Medicare program into a voucher system, with a fixed payment provided to seniors that they could use to purchase insurance. It also would have raised the Medicare eligibility age to 67 from 65. Democrats have hammered at the proposal as a scheme to “kill Medicare,’’ and some voters in the New York race this week said they opposed the Republican in the race because they disapproved of the party’s approach.

Senate Democrats, knowing it would not pass in their chamber, pushed for yesterday’s vote just to force Republican lawmakers to go on the record supporting politically risky cuts in Medicare.

Five Senate Republicans — three of them from New England — joined unanimous Democrats against the measure yesterday. Scott Brown of Massachusetts and Maine’s Olympia Snowe and Susan Collins were joined by Lisa Murkowski of Alaska and Rand Paul of Kentucky — a Tea Party favorite who objected to the bill’s effect on the national debt.

Now Democrats are hoping they can parlay opposition to the Medicare proposal into something bigger. Voters across the country can expect to see the Medicare controversy reprised in advertisements throughout the upcoming election season.

“If Democrats are worth a whit, we will drive this home every opportunity we get,’’ said Representative Peter DeFazio, an Oregon Democrat.

Political analysts cautioned Democrats against celebrating excessively over the New York vote, however. Special elections are poor bellwethers for future elections, and much could change in the months between Tuesday’s election and November 2012.

“The fact that this is a district that has been Republican in recent years, clearly that gives Democrats hope and Republicans pause, but whether it actually says anything about the elections in 2012 is a completely different issue,’’ said Peter A. Brown, assistant director of the Quinnipiac University Polling Institute.

Still, Senate majority leader Harry Reid, a Nevada Democrat, described the results of the special New York election as a reflection of the mood across the country. “Even though the American people yesterday said no, the Republicans here in the Senate virtually all said, ‘We don’t care,’ ’’ Reid said.

In defeat, Republicans criticized Democrats for forcing a vote on the GOP plan without producing a budget proposal of their own.

“The thing that’s distressing to me is that the Democrats appear to be only interested in Medicare as a political football, something with which they can win political points. They have no plans whatsoever for how to save Medicare,’’ said Republican whip Jon Kyl of Arizona.

Said Brown: “Harry Reid’s got to stop playing divisive political games when it comes to dealing with our fiscal and financial problems. To do what he did . . . just shows me that it’s about politics.’’

The House plan was drafted by Representative Paul Ryan of Wisconsin, chairman of the budget committee, who has been praised by members of his party for political courage. But some Republicans have distanced themselves from the measure as its unpopularity became clear, and GOP Senate leaders indicated in recent days that they would not pressure members of their caucus to vote for it.

Conservatives continued to defend the plan yesterday as a responsible attempt to rein in out-of-control government spending. Representative Allen West, a Republican from Florida backed by the Tea Party movement, said Democrats have been effective in hammering on the Medicare issue and that the GOP needed to respond as forcefully.

“I think the other side has done a very good job of demagoguing something,’’ he said, “when we should probably do a little better job of marketing the message and getting it out there.’’

The race for the upstate New York seat has been closely watched as prospects for Hochul’s win grew. Republicans, including onetime presidential candidate Jack Kemp, held the seat for 50 of the last 60 years. The latest Republican to hold the seat was Chris Lee, who resigned in February after shirtless photos that he took of himself and sent to a woman surfaced on the Internet.

Hochul was initially considered the underdog, but she used Ryan’s Medicare plan as a bludgeon against Republican Jane Corwin throughout the race, while her TV ads continually reminded voters about the GOP Medicare plan. Hochul ultimately gained 48 percent of the vote, while Corwin earned 42 percent, and a Tea Party candidate, Jack Davis, took 8 percent.

“The combination of Medicare in particular being singled out for cuts, when we can’t eliminate oil subsidies, can’t eliminate certain defense spending. . . . I heard it loud and clear when I was home,’’ Keating said.