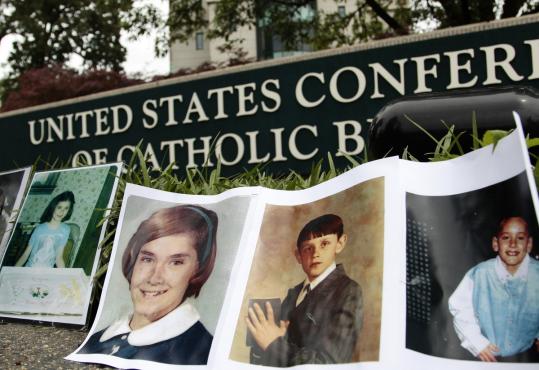 Photographs of children abused by members of the Catholic clergy were displayed during a protest near the headquarters of the US Conference of Catholic Bishops in Washington. (Pablo Martinez Monsivais/ Associated Press)
By Lisa Wangsness Globe Staff / May 19, 2011

WASHINGTON — Authors of a controversial study that examined the causes of sexual abuse in the Roman Catholic Church yesterday defended their finding that a surge in abuse in the 1960s and ’70s was sparked by broader social and cultural upheaval and a failure to adequately prepare priests for a life of celibacy amid such change.

The study’s lead author, Karen Terry of the John Jay College of Criminal Justice in New York, said that interviews with hundreds of priests and a separate evaluation of larger societal trends including divorce rates, illegal drug use, crime, and premarital sex shaped the researchers’ conclusions.

But she also cautioned that the causes of abuse are complex and can’t be linked to a single factor. It wasn’t simply that social mores were changing in that era, she said, but that priests had not received instruction in human sexuality and emotional relationships. And episodes of abuse, Terry said, often happened among priests who felt isolated and under stress.

“What’s important is this convergence of factors,’’ Terry said in an interview yesterday at the Washington headquarters of the US Conference of Catholic Bishops, which commissioned the study.

Critics said yesterday that the report minimized the sexual abuse epidemic in the church and downplayed the institutional church’s responsibility for creating conditions where abuse flourished, relieving church leaders of an obligation to make fundamental changes. They also complained that the report trivialized the crisis by describing it as a relatively contained historical phenomenon, with a huge spike in abuse cases over a 20-year period and a decrease in the rate of abuse since the mid-1980s, according to the study.

“Predictably and conveniently, the bishops have funded a report that tells them precisely what they want to hear: It was all unforeseeable, long ago, wasn’t that bad, and wasn’t their fault,’’ David Clohessy of the Survivors Network of Those Abused by Priests said in a statement.

And some questioned the report’s emphasis on the sociocultural dynamics surrounding the spike in abuse at the expense of other factors, particularly the role of the church hierarchy.

David Finkelhor, director of the Crimes Against Children Research Center at the University of New Hampshire, said the social dynamics in the 1960s and 1970s may have figured into the abuse crisis, but the study’s authors were not sufficiently specific about how.

“For example, the big rise in homicide and robbery we saw during that period was due to an increase in the illegal drug markets,’’ he said. “The increase in the divorce [rate] was due to the fact that women were seeing themselves in different roles. That doesn’t explain’’ why priests abused children.

Finkelhor lauded the researchers for their “thoughtful presentation’’ and analysis of a huge variety of variables, but he said the report could have focused more on the hierarchy’s responsibility for the crisis.

“There is reason to think that the nature and extent of the problem was abetted by the confidence that people had that they wouldn’t get caught, or that sanctions would be minor,’’ he said.

What seems to confirm that, he noted, is the report’s finding that when the church began to take abuse more seriously in the 1980s and 1990s, the rates of abuse dropped off.

Bishop Blase Cupich of Spokane, Wash., chairman of the Committee on the Protection of Children and Young People for the bishops’ conference, said the church cannot forget its responsibility.

“The shame of failing our people will remain with us for a long time,’’ he said. “It should. Its sting can keep us resolute in our commitments and humble so as to never forget the insight we came to nearly a decade ago in Dallas,’’ when the bishops issued new procedures for handling abuse.

Barbara Thorp, who heads victim outreach efforts for the Archdiocese of Boston, said she was heartened the study showed the surge of abuse seemed to be contained to a historical moment. But she said the effects of the crisis are not nearly over.

“We live this on a daily basis,’’ she said. “It’s not in history, in a sense, because people are coming to us who are alive now, and still trying to heal from the horrific abuse they experienced as children.’’

The study’s authors said their research upended some widely argued theories about the abuse. Gay priests were no more likely to abuse than straight priests, they found, and in fact, abuse incidents seemed to decline as more gay men entered the priesthood in the 1980s and 1990s. The church’s policy on priestly celibacy remained constant during the big spike in abuse cases, leading the authors to conclude that celibacy was not any more likely as a cause.

Most priests who abused were trained at mainstream seminaries, the report found, not foreign institutions or seminaries for teenagers, as some have postulated. And no single psychological characteristic, developmental or sexual history factor distinguished priests who abused from those who did not, making it unlikely that seminaries could have done more to screen out potential abusers.

But in one of the most confusing and provocative aspects of the report, the authors asserted that pedophiles were not the cause of the sexual abuse crisis, either.

Although the word “pedophilia’’ is commonly used to describe any adult who has sexual contact with minors, the psychological definition is much more restrictive, referring to adults who have a persistent sexual attraction to children under age 13, usually of a particular age group.

By that definition, only 5 percent of priests in the treatment centers were pedophiles, according to clinicians who treated them, the John Jay team wrote, so “it is inaccurate to refer to abusers as ‘pedophile priests.’ ’’

Later in the report, the researchers seemed to employ an even narrower definition of pedophilia.

“It is worth noting that while the media has consistently referred to priest-abusers as ‘pedophile priests,’ pedophilia is defined as the sexual attraction to prepubescent children,’’ the report said. “Yet, the data on priests show that 22 percent of victims were age 10 and under, while the majority of victims were pubescent or postpubescent.’’

Terry said later that the purpose of including this information was not to minimize the crimes of those who abused older children and youth, but rather to clarify the problem and its potential solutions.

“If you want to prevent sexual abuse, it’s going to be very different to prevent someone who is pathologically driven to abuse prepubescent children from someone who might regress to this kind of behavior under stressful circumstances,’’ she said. “Is this a situation where we need to help them improve their social skills so they are not hanging out with 14-year-olds?

“Or is this someone where we need to have them go into psychological treatment so they don’t act on their impulses to sexually act out with 8-year-olds?’’