THIS STORY HAS BEEN FORMATTED FOR EASY PRINTING
Political fallout

Victory could be dimmed by economy 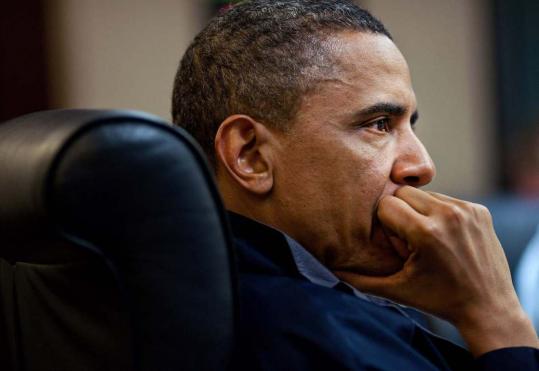 WASHINGTON — A week that began with continued questions of his American citizenship ended late Sunday night with his announcement that he had overseen the capture of the world’s most-wanted terrorist.

For President Obama — whom Republicans have called weak on defense and indecisive on foreign policy — the killing of Osama bin Laden represents a key moment in his presidency.

“When you think of what’s a single event to have big impact on public perception of a president, I can’t think of anything bigger than this,’’ said Alan Abramowitz, a professor of public opinion and the presidency at Emory University. “It helps in his image as a leader. It was his mission.’’

Had the mission gone awry, some analysts said, it could have deeply damaged his presidency. But the raid’s daring success, including confirmation of bin Laden’s death, won Obama plaudits from across the political spectrum. Even former vice president Dick Cheney, who has been a chief critic of Obama on national security matters, praised him.

The startling news is expected to divert attention, at least temporarily, away from an underperforming economy and high gas prices, topics that potential Republican presidential candidates have seized. It could also bolster Obama’s low approval ratings while exposing a Republican presidential field that so far lacks a candidate with substantial foreign policy experience.

“It really enhances Obama’s national security credentials,’’ said Jeremy Mayer, a professor at the School of Public Policy at George Mason University. “He can look in the camera and say, ‘I did in two years what President Bush and Republicans couldn’t do in seven.’ He won’t say it that bluntly, but that’s what the message will be.’’

Still, the contours of the 2012 campaign are unlikely to change — and by the time voters go to the polls, this could be a distant memory. The race is almost certain to hinge not on issues of foreign policy, but on the domestic issues that have dogged Obama.

“While this is absolutely a credential that the president can and will use from now through his reelection campaign, I tend to think that 2012 is going to be more about spending, deficits, jobs, and the economy,’’ said Stu Rothenberg, editor of a Washington-based nonpartisan political newsletter. “Not about the killing of Osama bin Laden.’’

“It answers some criticisms of him not being an effective commander in chief,’’ said Jon McHenry, an Alexandria, Va.-based GOP pollster and strategist. “But it’s not going to help him as much as if gasoline went down to $3 a gallon. He ultimately is going to be judged on the economy.’’

The Republican field of presidential hopefuls was largely complimentary.

Several candidates gave Obama credit for the death of the man responsible for the attacks on Sept. 11, 2001.

“Congratulations to our intelligence community, our military, and the president,’’ said former Massachusetts governor Mitt Romney.

Even celebrity mogul Donald Trump, who spent much of the past few weeks ridiculing the president and questioning his credentials as well as his place of birth, offered a nod of appreciation: “I want to personally congratulate President Obama and the men and women of the armed forces for a job well done.’’

Now, though, discussion is expected to turn toward the expanded US role in Afghanistan. Obama will have to decide whether to make good on a promise to withdraw troops, yet the war will be harder to justify now that one of the stated goals has been accomplished.

It’s unclear whether the American electorate much cares. During the midterm elections in 2010, only 7 percent of voters said the war in Afghanistan was the most important issue, according to exit polls. By contrast, 63 percent of those surveyed said it was the economy, while 18 percent said health care.

“We’ve got to give him the day,’’ said Scott Reed, a Washington-based Republican consultant who was campaign manager for Bob Dole’s 1996 presidential campaign. “But by the end of the week we’re back to business. And jobs and gas prices are going to be at the top of what’s on everybody’s minds.’’

Military victories have not always translated into election wins. President George H.W. Bush lost the 1992 election, even though just a year earlier he orchestrated a worldwide military campaign that ousted Saddam Hussein’s forces in Kuwait and humiliated the Iraqi leader.

The GOP candidates have focused largely on domestic issues — and at a forum in Manchester, N.H., on Friday night, five likely presidential hopefuls spent 90 minutes talking almost exclusively about domestic issues, criticizing Obama on the economy and his health care plan. Still, the death of bin Laden was welcome news for the White House.

In the last week, the president has had to confront floods in the Midwest and tornadoes in the South, and he facilitated the release of his long-form birth certificate. Even the shuttle launch he was supposed to attend was scrapped due to weather.

“You could say this is the first upbeat event of his presidency,’’ said presidential historian Joan Hoff, a professor at Montana State University. “If you look at what’s happened since he took office, it’s all been a real downer: two wars and a collapsed economy.’’