THIS STORY HAS BEEN FORMATTED FOR EASY PRINTING
SITUATION ROOM 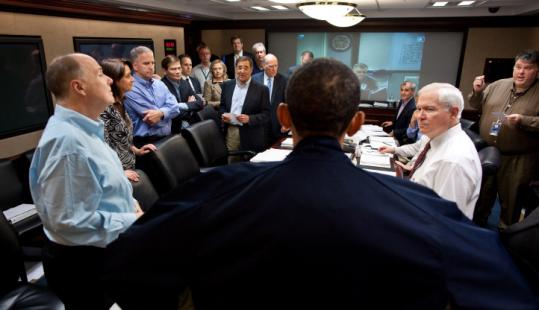 WASHINGTON — From halfway around the world, President Obama and his national security team monitored the strike on Osama bin Laden’s compound Sunday in real time, watching and listening to the firefight that killed the terrorist leader.

Gathered in the White House Situation Room, members of the group held their breaths and barely spoke as they waited to see whether a carefully crafted yet extremely risky plan would succeed, said White House counterterrorism adviser John Brennan.

Obama had been playing golf but returned to the White House for the suspenseful multimedia report Sunday.

Brennan said he would not reveal details “about what types of visuals we had or what type of feeds that were there but it was — it gave us the ability to actually track it on an ongoing basis.’’

Typically, members of the Navy SEAL team that conducted the operation wear helmet cameras that transmit sound and video to their operation centers, and that data can be fed live to the White House and Pentagon.

As members of the SEAL team lowered themselves from helicopters into bin Laden’s compound in Abbottabad, Pakistan, the president and his advisers could only wait.

“It was probably one of the most anxiety-filled periods of time, I think, in the lives of the people who were assembled here,’’ Brennan told reporters yesterday.

“The minutes passed like days, and the president was very concerned about the security of our personnel.’’

There hadn’t been unanimity among members of Obama’s team about going forward with the plan. The president had plenty of evidence to suggest bin Laden would be found in the compound, but there was no ironclad certainty.

Then there was the danger. Anything could happen. And indeed, something did. One of the helicopters carrying the SEALs stalled upon arrival in the compound and had to be abandoned. It was a heart-stopping moment.

“Seeing that helicopter in a place and in the condition that it wasn’t supposed to be, I think that was one of — at least for me and I know for the other people in the room — was the concern we had that now we’re having to go to the contingency plan,’’ said Brennan.

Switching personnel to a different copter worked. In the end, so did the whole operation, and bin Laden was shot dead. But not before the president’s nerves got a serious workout.

“When we finally were informed that those individuals who were able to go in that compound and found an individual that they believed was bin Laden, there was a tremendous sigh of relief,’’ Brennan said.

“And the president was relieved once we had our people and those remains off target.’’