THIS STORY HAS BEEN FORMATTED FOR EASY PRINTING
CLOSER TO CLOSURE

At ground zero, a mix of emotions is felt and released 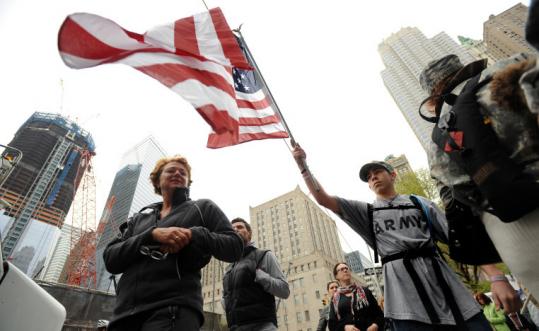 NEW YORK — They came from upstate New York, Connecticut, and Long Island, carrying flags and photos to the edges of ground zero, as they have many times before. But this time, their grief and anguish were infused with a sense of vindication and even bravado. Osama bin Laden was dead.

“At least we can breathe a little,’’ he said. “No more little video clips, no nothing. No more taunting.’’

While relief and even joy swept across the country, nowhere, perhaps, were those emotions stronger than here, in Lower Manhattan where the towers fell. The streets around ground zero were teeming, with firefighters, family members, and volunteers who lost loved ones on Sept. 11.

A world away, in a Pakistani suburb, a covert operation had delivered the rough justice they had longed for since the attacks. Many had given up hope that bin Laden, whose image and voice had mocked them in videos and tapes, would ever be found.

Yesterday, after President Obama told the nation that bin Laden had been killed, they gathered, weeping one moment and cheering the next. Many had barely slept the night before. It seemed everyone, except for the tourists and the media, had been drawn by decade-old memories, rubbed raw again.

John Kirk, a 53-year-old retired New York City firefighter, wore a button with a photo of his best friend, Lieutenant Thomas O’Hagan, a firefighter who was killed in the attacks, leaving behind 11-month-old twin boys.

Kirk said bin Laden’s death brought back some of the guilt he felt after Sept. 11 because O’Hagan and 342 of his fellow New York firefighters had died.

Still, he said, he was satisfied.

“As best as can be expected, justice was done because there’s no trial, and he’s buried at sea, so there’s no place for people to go and idolize him,’’ he said.

The mood recalled the raised fists and shouts that greeted President Bush, three days after the attacks, when he grabbed a bullhorn and spoke to the workers at Ground Zero, declaring: “I can hear you. The rest of the world hears you. And the people who knocked these buildings down will hear all of us soon.’’

“I joined the military for this day,’’ he said, as strangers applauded him for his service. “This is what it’s all about. It just proves to the enemy: you can run, but you can’t hide.’’

Victoria Dedvukaj, an immigrant from the former Yugoslavia who cleans offices for a living, traveled several hours by train from her home in upstate New York.

She carried a photo of her son, Simon, a janitorial foreman who worked on the 95th floor of the north tower and a handwritten sign that read, “From Mommy: God Bless America. We Love You, Simon.’’

Across the street, at St. Paul’s Chapel, Donna Strout sat quietly in a pew. She and dozens of others had volunteered at the church after Sept. 11. Yesterday, she thought of one fellow volunteer in particular, a city sanitation worker who used to sing “God Bless America’’ and who died in November.

“I can hear him now, singing God Bless America up there,’’ she said, wiping away tears. “He must be smiling and he must be so happy because now he’s singing . . . and he knows, finally, we got [him].’’