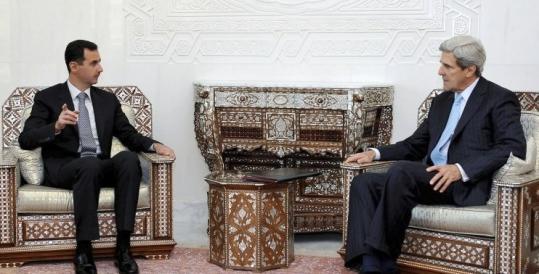 WASHINGTON — Senator John Kerry has emerged as an outspoken champion of change in the Middle East, among the first in Washington to demand that Egyptian president Hosni Mubarak step down and that the US military prepare to intervene against the forces of Moammar Khadafy in Libya.

Yet as Syrian government forces advance with tanks and rifles against masses of protesters and attack mourners at funerals for dissidents, Kerry’s comments have been far more muted about a dictator he has worked with the past two years: Syria’s Bashar al-Assad.

Kerry, a leading proponent of the Obama administration’s controversial attempt to improve relations with Syria, has publicly warned Assad not to kill his own people. But Kerry has not called for him to step down, as he did with embattled leaders in Egypt and Libya.

As recently as last month, the Massachusetts Democrat said he remained optimistic that Assad would usher in an era of warmer relations and reform.

“I personally am very, very encouraged,’’ Kerry, chairman of the Senate Foreign Relations Committee, told an audience at the Carnegie Endowment for International Peace, a Washington-based think tank. His remarks were made March 16, the day after protests broke out in Syria. “I have been a believer for some period of time that we could make progress in that relationship.’’

Now, as the Obama administration condemns Assad for the brutal attacks on his citizens and prepares sanctions against his regime, its diplomatic overtures and Kerry’s role are coming under increasing scrutiny.

“While he went there to have dinner with Assad, people were being tortured,’’ said Elliott Abrams, who was a senior adviser to President George W. Bush.

Abrams gave credit to Kerry for his stern warnings to Assad in recent weeks but said the senator should have known all along that the regime was brutal: “He had a view of that regime that was simply false. Assad is not a reformer. . . . I just don’t understand how Kerry or Obama or anybody else thought Assad was going to change.’’

The senator could not be reached for comment during the lawmakers’ recess, his staff said. A statement released by the Senate Foreign Relations Committee staff said Kerry used his four visits to Damascus in the past two years to demand that Syrian leaders stop playing a destructive role in the Middle East and work toward internal reforms and peace with Israel.

“When the US has made strides with Syria, it has been through engagement, not isolation,’’ a Senate Foreign Relations Committee aide said in a statement, citing the success of President George H.W. Bush in winning Syria’s support in the first Persian Gulf War.

Some Middle East specialists say Kerry’s work behind the scenes represented the best chance of changing Syria’s behavior and nudging alliances in the vital region toward US initiatives.

“I don’t think John Kerry looks foolish,’’ James Zogby, president of the Washington-based Arab American Institute. “It’s not a question of whether Assad is capable of being a reformer or was interested in being a reformer. At the time that Kerry was as engaged as he was with travels back and forth, engagement with Syria was the only option.’’

The Obama administration has also declined to call on Assad to step down. While White House spokesman Jay Carney urged the Syrian leader to heed the protesters’ demands, State Department officials said US diplomats in Damascus would continue communications with Assad in an attempt to influence his decisions.

US officials have debated for years over how to deal with Assad, who inherited Syria’s authoritarian, socialist regime at the age of 34 when his father, Hafez, died in 2000. Many hoped that Assad, a British-trained eye doctor, would allow more political freedoms and have better relations with the United States than his father, who had close ties to the Soviet Union during the Cold War. Many also said he could become a pivotal player in any peace deal with Israel.

Assad spoke often about the need to modernize his country, and he allowed private banks, universities, and a stock market to open in Syria. But his economic reforms were not matched by political reforms — or by friendlier policies toward the United States and Israel.

In 2003, relations worsened when Syria opposed the US-led invasion of Iraq, its neighbor, and the country eventually served as a transit point for insurgents. In 2005, US officials accused Syria of meddling in neighboring Lebanon and assassinating a series of moderate leaders, including Prime Minister Rafik Hariri.

Hariri’s death prompted Bush to withdraw the US ambassador to Syria and cut off almost all contact with the regime. As Washington turned its back on Syria, Assad drew closer to Iran, signing a mutual defense pact.

After Obama’s election, Kerry argued forcefully that the United States should restore its ambassador and take concrete steps — including financial incentives such as the removal of sanctions — to coax Syria away from its alliance with Iran and toward a peace agreement with Israel.

Obama agreed to test the waters, giving Kerry the green light to travel four times to see Assad. During one visit, in 2009, Kerry and his wife, Teresa Heinz, dined with Assad and his wife in Damascus.

“Kerry tried to use personal persuasion,’’ said Thomas Dine, a former executive director of the American Israel Public Affairs Committee who is spearheading a program to improve US-Syria relations under the auspices of Search for Common Ground, a conflict-resolution organization. “He has taken on a friendship with Bashar Assad himself, and the wife. That is classic mediation. You try to build to trust.’’

Other non-diplomats from the United States also visited Assad. Former president Jimmy Carter, Representative Nancy Pelosi, a Democrat who was House speaker at the time, and Senator Arlen Specter of Pennsylvania, a Republican, traveled to Damascus.

But despite these overtures, Syria did little to change its behavior, according to US officials.

Murhaf Jouejati, a Syrian-born specialist on Middle East affairs at the National Defense University, said Israel’s unwillingness to give up the Golan Heights, a fertile area captured in 1967, undercut Kerry as he tried to deal with Syria.

“Syria wanted an iron-clad guarantee that if it was going to leave its alliance [with Iran], it would get the Golan Heights,’’ said Jouejati, who advised Syrian negotiators during peace talks with Israel in 1999 under Assad’s father. “If, in the end, Syria did not go along with Senator Kerry, it is not because Kerry is a fool. It is because Israel was not cooperative.’’

Jonathan Peled, spokesman for the Israeli Embassy in Washington, said that Assad has repeatedly turned down Israel’s offer for talks.

Whatever the case, efforts to persuade Syria to change appear to have failed. Nadim Shehadi, a Middle East specialist at Chatham House, a British-based think tank, said those who placed their hope in Assad have now been proved wrong.

“Many people were fooled by Bashar al-Assad,’’ he said.