Says reductions are not enough to shrink deficit 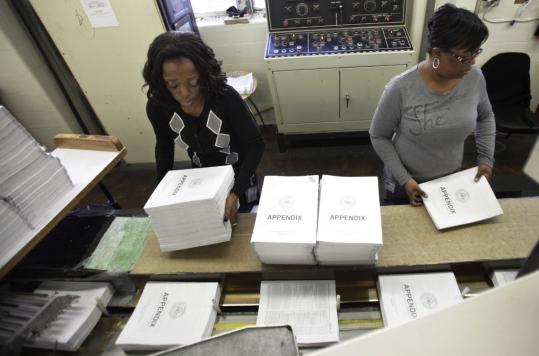 WASHINGTON — President Obama drew fire yesterday from congressional Republicans and independent budget analysts for his reluctance to advance a plan that would tackle the nation’s biggest budget problems in the spending blueprint he will submit to Congress today.

In the first statement of his budget priorities since Republicans regained control of the House, Obama will avoid politically dangerous recommendations to wipe out cherished tax breaks and to restrain safety-net programs for the elderly, put forward last year by his own bipartisan fiscal commission as a strategy for reining in a soaring national debt.

Obama’s budget for fiscal year 2012, which begins Oct. 1, would trim deficits by $1.1 trillion over the next decade, White House budget director Jacob Lew said, primarily through budget cuts at the Pentagon and a five-year freeze on domestic spending that targets many programs long favored by Democrats.

Lew has told advocates of reform that the White House thinks any significant plan offered by the president would simply become a target for partisan attack. Key Democrats, including Senate Budget Committee chairman Kent Conrad, Democrat of North Dakota, said they accept that rationale.

Republicans argued that Obama was abdicating a responsibility to chart a path to solvency. They criticized him for proposals that will boost spending in such areas as education, public works, and research, and charged that the president’s cuts are not deep enough.

“The country’s biggest challenge, domestically speaking, no doubt about it, is a debt crisis. . . . It looks like the debt is going to continue rising under this budget,’’ Paul Ryan, a Wisconsin Republican who chairs the House Budget Committee, said on “Fox News Sunday.’’ “Presidents are elected to lead, not to punt. And this president has been punting.’’

Republicans vowed to push ahead with their own plans to trim $61 billion in spending from the seven months left in the current budget year and then squeeze Obama’s 2012 budget plan for billions of dollars in additional savings in response to voters alarmed at an unprecedented flood of red ink.

“He’s going to present a budget tomorrow that will continue to destroy jobs by spending too much, borrowing too much, and taxing too much,’’ House Speaker John Boehner said on NBC’s “Meet the Press.’’ Boehner released a statement from 150 economists calling on Obama to take immediate action to reduce government spending.

Republicans plan to vote this week on their plan to dramatically cut spending in this fiscal year, and said they will present their long-term strategy in April.

Some who worked on Obama’s fiscal panel were also disappointed by his decision not to endorse any of the major elements of their deficit-reduction plan, which calls for raising the Social Security retirement age, charging wealthy seniors more for Medicare, and limiting popular tax breaks such as the mortgage interest deduction.

The plan has attracted support from key members of both parties and is the focus of an effort in the Senate to develop a bipartisan spending plan.

“I would have preferred to see the administration get out front on addressing the entitlements and the tax reform that we need to reduce long-run deficits,’’ said Alice Rivlin, a commission member who served as budget director in the Clinton White House. “But they clearly made a tactical decision that this is not the best way to get to a positive result.’’

Erskine Bowles, the Democratic chairman of the fiscal commission, said the White House budget request goes “nowhere near where they will have to go to resolve our fiscal nightmare.’’

Lew defended the White House on CNN’s “State of the Union’’ yesterday, arguing that the fiscal commission had “a very significant impact’’ on the president’s budget blueprint. The spending plan incorporates many ideas developed by the commission, he said, including proposals to limit awards in medical malpractice lawsuits, overhaul the corporate tax system, and freeze pay for federal workers.

The budget also would cut $100 billion from Pell Grants and other higher-education programs through 2021, scaling back a key Obama initiative.

The Pentagon’s spending plans over the next decade would be cut by $78 billion with reductions in various weapons programs deemed unnecessary.