He says issue is a state matter 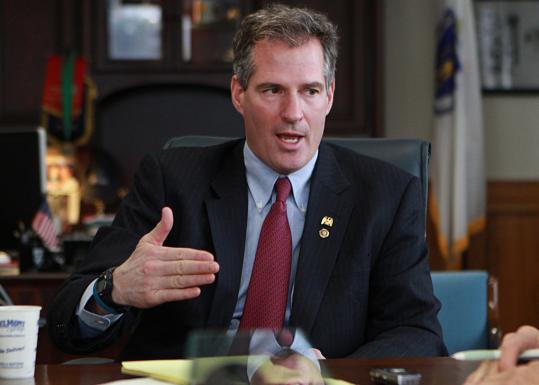 Senator Scott Brown is gearing up for his reelection campaign next year. In a wide-ranging interview, he said he has upheld his pledge to work across party lines. (Suzanne Kreiter/Globe Staff)
By Michael Levenson and Frank Philips Globe Staff / January 15, 2011

Senator Scott Brown, who has described himself as a supporter of Massachusetts’ tough gun laws, said yesterday he would not support federal gun control legislation and does not know if anything can be done to prevent a repeat of last week’s mass shooting in Arizona.

In a wide-ranging, 20-minute interview, one of several Brown gave yesterday as he gears up for his reelection campaign in 2012, the Republican said he would not support a renewal of the federal assault weapons ban, which has garnered fresh attention after the killing of six people and the grave wounding of Representative Gabrielle Giffords.

From 1994 until it expired in 2004, the federal ban made it illegal to manufacture or import extended ammunition clips like the one that allowed the gunman, Jared L. Loughner, to fire at least 30 bullets before pausing to reload.

“I’m not in favor of doing any additional federal regulations with regard to any type of weapons or federal gun changes,’’ Brown said. “I feel it should be left up to the states.’’

The senator also rejected the notion that the vitriolic tone of political rhetoric played any part in motivating Loughner. “It seems clear and apparent that long before Sarah Palin and long before the supposed rhetoric, this guy was focused on her for whatever reason,’’ Brown said. “And, clearly, he had some very serious mental issues.’’

Sitting in his Boston office a year after his election, Brown sought to burnish his image as an independent actor in Washington and embraced the challenge he will face from Democrats in 2012.

“Is it any surprise I’m the underdog and the target?’’ he said. “Am I missing something? I’ve been taken for granted forever. I’m just going to keep battling.’’

A little-known state senator until 2009, Brown is near the midpoint in his Senate term. Wednesday will mark one year since he stunned the political world by winning a special election to finish the term of Edward M. Kennedy, who died in 2009 after holding the seat since 1962.

Since that upset, Brown said, he has upheld his pledge to work across party lines, and his votes have at times surprised Democrats and alienated his conservative and Tea Party movement backers, in particular his support of the new financial regulations and President Obama’s tax-cut compromise. At other times, he stood with Republicans to oppose measures such as one creating a path to citizenship for certain young illegal immigrants.

Polls have indicated he is the state’s most popular politician, but his star power failed to vault into office any of the GOP candidates he supported last fall for federal or statewide positions.

Now Democrats are scrambling to find a candidate who can topple him. This week, one of the biggest potential challengers, Kennedy’s widow, Vicki, announced she would not run.

Those who may challenge him include US representatives Michael E. Capuano, Edward J. Markey, and Stephen F. Lynch, as well as City Year cofounder Alan Khazei and former mutual fund executive Robert Pozen.

Meanwhile, Brown is preparing to retake the political stage next month when he releases his book, “Against All Odds: My Life of Hardship, Fast Breaks, and Second Chances,’’ and launches a national book tour.

In the interview, Brown showed some bravado about his political strength, measuring his victory a year ago against Governor Deval Patrick’s last fall.

“I had 60,000 more votes than the governor did in the most recent election,’’ he said. “I had broad-based support by Republicans, Democrats, independents, and Tea Party members.’’

But he would not address the anger some in the Tea Party movement have expressed about some of his votes. Instead, he minimized the movement’s role in his election, saying it was only “a part’’ of his coalition.

“I will say I think I’ve done everything I said I’m going to do, which is to be moving our country forward, and be that independent guy and voter and thinker,’’ he said. “I think I’ve done a good job in that regard.’’

Brown said he did not watch the speeches on the Arizona shootings that Obama and Palin gave this week.

“Obviously, I didn’t listen to them; I read excerpts from them,’’ he said. “They each have a role. Sarah has a role where she has motivated people who believe as she does. And the president is obviously addressing something that’s important to address, which is addressing the tragedy and then also asking people to kind of tone it down a little bit. But I’m not into all the finger-pointing. I don’t think it’s very productive.’’

Brown said he prides himself on working and socializing with members of both parties.

“I may not agree with you on everything,’’ he said, “but I want to be able to go out and have a beer with you after.’’

He said he has had drinks with Senator John F. Kerry, although he drew a friendly distinction between their favorite beverages. “He likes wine,’’ Brown said. “I like beer.’’

Brown said he does not fear for his safety after the shooting in Tucson and does not want additional security.

“I’ve always had like a sixth sense. I’ve always been very guarded and always watching where I am, and who is around me,’’ he said. “But I enjoy going out and about and meeting folks. That’s one of the things I enjoy most about the job, so I’m not doing anything different.’’

As a state lawmaker, Brown received A grades from the state’s gun owners’ lobby. But at a Pittsfield Rotary Club luncheon on Wednesday, he said, “In Massachusetts, I know we have very strong gun laws. I’ve worked on them. I’ve supported them,’’ according to the Lowell Sun.

Brown, whose reelection campaign will coincide with Mitt Romney’s probable second bid for the presidency, called the former Massachusetts governor “one of the nicest, most hard-working men I’ve ever met.’’

But he said he was not sure if he would campaign for him. “Obviously when it comes to reelection,’’ he said, “I’ll be focusing on getting reelected myself.’’