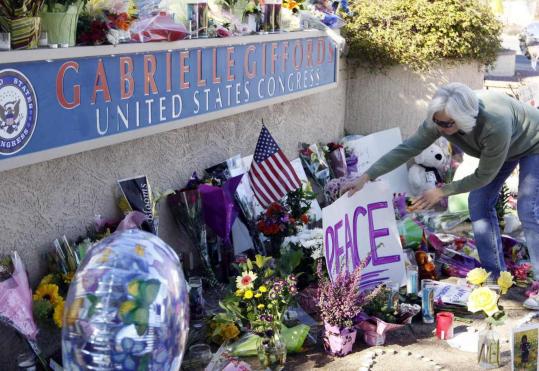 A woman tended a memorial yesterday outside the Tucson office of Representative Gabrielle Giffords, who was shot Saturday. (Rick Wilking/ Reuters)
By Mark Arsenault and Bryan Bender Globe Staff / January 10, 2011

The question argued by politicians and pundits: Did vitriol and violent metaphors in political speech tip an unstable person to pick up a gun? With the answer still unknown, calls to lower the temperature of American discourse came from all parts of the political spectrum.

“We have had times in our history when the discourse has been terrifying,’’ said former Senator Harris Wofford of Pennsylvania, who served as a civil rights adviser to President Kennedy and the Rev. Martin Luther King Jr. “But this is one of the worst times in my lifetime.’’ The past 20 years, he said, has brought “a deterioration in the civil discourse.’’

The Sunday political talk shows yesterday were dominated by introspection about the turn of political discourse, and the vitriol that is common on talk radio, cable networks, and the Internet.

“We are in a dark place in this country right now,’’ Representative Emanuel Cleaver, a Missouri Democrat, said on “Meet the Press.’’ “The hostility is here. People want to deny it; it is real.’’

The bout of soul-searching followed the sudden attack on Giffords, a Democrat, in a Tucson parking lot on Saturday, which among its victims claimed the lives of a federal judge and a 9-year-old girl. Arizona US attorney Dennis K. Burke announced yesterday that he had charged the alleged gunman, Jared Lee Loughner, with murder and attempted murder.

Officials had yet to ascribe any clear political motive to Loughner yesterday, or link him to any groups. Still, Arizona has been among states consumed by intense debates over immigration and health care, and YouTube postings attributed to Loughner contained antigovernment statements.

Some activists writing online accused the media yesterday of unfairly linking conservative figures and the Tea Party movement — which channeled anger and frustration over the government into a political force — to the shooting.

“It should not be, but the media, under the guise of ‘a full exposition’ of the evil in Arizona, is back to subtly and not so subtly pinning the blame for the attempted assassination of the congresswoman and the related shootings on the Tea Party movement, Sarah Palin, Rush Limbaugh, Glenn Beck, me, you, and everyone right of center,’’ conservative pundit Erik Erikson wrote on Redstate.com, a leading conservative blog.

Media reports have highlighted Giffords’s criticism of Palin, the 2008 GOP vice presidential nominee, for including her on a list of lawmakers Palin was targeting for defeat on her Web page, placing crosshairs like those used in a rifle scope over Giffords’s district on a map.

Senator Richard Durbin, an Illinois Democrat, criticized Palin in a TV interview for using the targeting symbolism. Palin, through a spokesman, said she never expected anybody would have considered the map a violent image.

Such use of metaphor, while controversial, is not unusual. Dailykos.com, a liberal political blog, also placed Giffords on a “target list’’ for defeat in the Democratic primaries for voting against former House Speaker Nancy Pelosi, saying that “not all of these people will get or even deserve primaries, but this vote certainly puts a bull’s-eye on their district.’’

Another element of the Giffords race also received attention yesterday: a campaign announcement last June from her GOP opponent, Jesse Kelly. The poster urged voters to “get on target for victory in November’’ by helping “remove Gabrielle Giffords from office’’ and “shoot a fully automatic M16 with Jesse Kelly.’’

The Tea Party , which provides support for more than 1,000 community-based Tea Party groups nationwide, condemned the violence in Tucson and said any suggestion the movement contributed to the shootings would be unfair.

“People coming together to fight for a set of governing principles has nothing to do with a guy loading a gun and shooting a congresswoman, a judge, and a 9-year-old girl,’’ Shelby Blakely, a member of the group’s National Leadership Council, said in an interview.

People shrug now at rhetoric that once would have been considered beyond the pale, he said. “It’s dehumanizing to our political leaders, which then leads some people believing they can act out’’ against them. “We’ve got to lower the overall temperature.’’

Representative John Lewis, a Democrat of Georgia who was brutally beaten during a civil rights march in 1965, similarly believes that “the rhetoric and the words are much more outlandish and unreal and unbelievable.’’

“I think it has devolved to a much higher pitch and is much more intense,’’ he said in an interview. “When I heard what happened [to Giffords], I said it is not a question of who but what. What kind of climate have we created? It doesn’t take much to set individuals or groups off.’’

Lewis said he was struck by the thought that the last time he saw Giffords was last Thursday, when she took to the House floor and read the First Amendment to the Constitution, which safeguards freedom of speech and peaceable assembly.

Others laid much of the blame for the current environment on elected officials and the hardened political positions they take while launching personal attacks on those who disagree with them.

“I think the politicians themselves have been very aggressive, on both sides of the spectrum,’’ said John Byrnes, founder of the Center for Aggression Management in Orlando, Fla., which advises the federal government and universities on ways to identify troubled individuals who may act out violently. “They are building on the fervor of discontent.

“Our politicians are not acting in the best interest of the community at large when all they do is say, ‘This is my position and I am not moving.’ ’’

One fear shared by partisans on both sides is that the killings in Arizona could fundamentally change the way members of Congress interact with their constituents.

“There will always be a metal detector between us and them,’’ predicted Blakely, from Tea Party Patriots. “It’s going to make it much easier for a lobbyist to meet with a member of Congress in their office than for a constituent to meet them on the street corner.’’