THIS STORY HAS BEEN FORMATTED FOR EASY PRINTING
Blue Dog stalwart 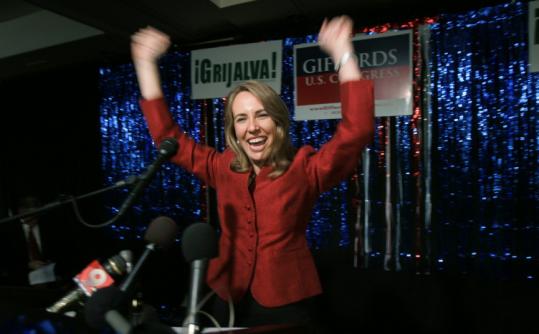 Gabrielle Giffords celebrated her victory in her first House race in Tucson in 2006. She has succeeded as a moderate. (Associated Press/ Daily Star, David Sanders/ File)
By Bob Christie Associated Press / January 9, 2011

But the Democrat from Tucson has managed to win election three times by holding centrist positions, reaching out to constituents, and bucking her party’s position on many issues as a key member of the Blue Dog Coalition, made up of moderate and conservative Democrats.

She has been tough on border security but supports comprehensive immigration reform.

She voted for President Obama’s stimulus and health care reforms, but pushed the administration to put armed National Guard troops on Arizona’s border with Mexico to stop drug and human smuggling.

In the aftermath of her November reelection win — where she fended off a strong Tea Party movement challenger in a Republican-dominated year that saw two other Arizona Democrats swept from Congress — Giffords has been mentioned as a possible Democratic nominee in 2012 for the US Senate seat held by Republican Jon Kyl or for the governor’s office in 2014. Kyl has not said whether he will run.

“When you’re talking about a future gubernatorial race or anything else, when you’ve run three times in a Republican district in a state that still has a narrow Republican majority, she goes to the top of the list,’’ said Don Bivens, state Democratic chairman.

Giffords, 40, a one-time Republican, became a Democrat in 2000 and won election to the Arizona House, where she served one term. In 2002, she became the youngest woman ever elected to the Arizona Senate and was reelected in 2004, then stepped down in 2006 to try for the seat of retiring Representative Jim Kolbe, a Republican.

Known as “Gabby,’’ she won easily by taking conservative positions for a Democrat in the district that had elected the moderate Kolbe 11 times — helped by the missteps of an ultraconservative Republican who failed even to win Kolbe’s endorsement. She was reelected in 2008.

She maintained her popularity in her district by scheduling regular outreach meetings to meet constituents one-on-one. It was at such a meeting in Tucson where she was shot yesterday.

She said in an October interview that the outreach events can sometimes be challenging. “You know, the crazies on all sides, the people who come out, the planet earth people,’’ she said.

Giffords, a third-generation Arizonan, was born June 8, 1970, in Tucson. Early in life, she was inspired by Arizona-born former Supreme Court justice Sandra Day O’Connor and registered as a Republican when she turned 18.

She graduated from Scripps College in Claremont, Calif., in 1993 with a degree in Latin American history and sociology, and studied in Mexico for a year on a Fulbright scholarship.

In 1996, Giffords received a master’s degree in regional planning from Cornell University. She worked for Price Waterhouse in New York for a short time before returning to Tucson in 1996 to take over her family’s tire dealership. She revived it before selling it in 2000 and then founded a property management business.

In 1999, dismayed by the conservative social positions of the Republican Party, she changed her affiliation to the Democratic Party. A year later, she was elected to the Arizona House.

Giffords met astronaut Mark E. Kelly, who has piloted space shuttles Endeavour and Discovery, in 2003 while they were serving on a committee in China. They were married in January 2007. They have no children.