Repeal of rule signals trend toward tolerance; Scott Brown one of six to break GOP ranks 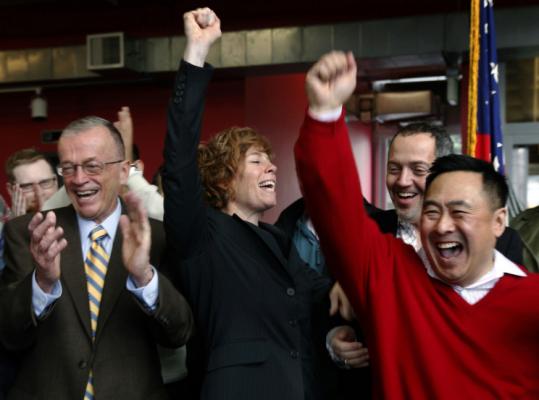 WASHINGTON — The US Senate voted yesterday to end America’s ban on gays and lesbians serving openly in the US military, a historic reversal that ends one of the nation’s most controversial social policies and signifies growing political tolerance for gay rights.

The measure, which now heads to President Obama for his signature, will result in the lifting of the “don’t ask, don’t tell’’ rule that has led to the discharge of some 14,000 gay service members since it was established during the administration of President Bill Clinton 17 years ago.

Senator Scott Brown of Massachusetts was among six Republicans who broke ranks to help Democrats overcome a Republican filibuster against the repeal measure, by a vote of 63 to 33; at least 60 votes were needed to move the measure ahead. Final passage came in a second vote yesterday afternoon, when it was approved 65 to 31, with eight Republicans in favor.

“I just posted on my Facebook: if you could only see the tears of joy in my eyes,’’ said Travis Hengen, of Weymouth, Mass., minutes after the Senate action. A 37-year-old former Army counterintelligence officer, he was discharged under the “don’t ask’’ policy in 2003. The Pentagon will now ready plans for eliminating the rule, taking what could be several months, as stipulated in the new law, to prepare for the transition.

In the meantime, Defense Secretary Robert Gates warned that the restrictions requiring gays’ sexual orientation be kept secret will remain in effect, despite calls yesterday from several senators that the Pentagon chief immediately halt all disciplinary proceedings.

Jubilant supporters likened the vote to President Harry Truman’s 1948 order to desegregate the military: “We’ll some day look back and wonder what took Washington so long to fix it,’’ said US Senator John F. Kerry, a Massachusetts Democrat.

Maine Senator Susan Collins, a Republican who was among a small group of senators who led the repeal fight in the Senate, thanked gay troops now serving in Afghanistan and Iraq: “We honor your service, and now we can do so openly.’’

Yesterday’s vote was considered a last chance for a legislative repeal, perhaps for years, with a Republican majority taking control of the House when the new Congress is seated next month.

The “don’t ask’’ policy has been the subject of controversy since Clinton backed it as a compromise in 1993, as gay rights advocates have attacked it politically and in the courts. Earlier this year, a federal court declared the law unconstitutional, a decision now under appeal.

A Pentagon study this year found that ending the ban would not harm the military’s long-term effectiveness, although some Army and Marine generals broke with their superiors and warned that letting gays serve openly during wartime would be disruptive.

Gates had urged Congress to repeal the policy so Gates could oversee an orderly implementation, before a federal court took the matter out of his hands.

Yesterday’s vote helps Obama deliver on a campaign promise to end the ban on openly gay people in the military.

It could also help the president mend his relationship with a Democratic base that has accused him of not standing up for the party’s principles in recent negotiations with Republicans over tax policy.

“It is time to close this chapter in our history,’’ Obama said in a prepared statement after the vote. “It is time to recognize that sacrifice, valor, and integrity are no more defined by sexual orientation than they are by race or gender, religion, or creed.’’

But the vote outraged many religious conservatives. “Today is a tragic day for our armed forces,’’ Tony Perkins, president of the Family Research Council, a conservative Christian lobbying group, said in a prepared statement. “The American military exists for only one purpose — to fight and win wars. Yet it has now been hijacked and turned into a tool for imposing on the country a radical social agenda.’’

The Senate vote completed a remarkable political turnaround for the “don’t ask’’ repeal authorization, which looked dead just 10 days ago after the Senate failed by three votes to approve a massive defense spending bill that included language to end the policy.

Several senators on the record in favor of repeal, including Brown, helped block the defense bill over procedural complaints. But in the immediate aftermath of that crushing defeat, repeal supporters gathered for one last effort.

They decided to push a stand-alone bill to reverse the policy, racing against the clock before Congress adjourned for the year.

The House last week easily approved the bill by a vote of 250 to 175, setting up yesterday’s drama in the Senate.

The Pentagon will immediately begin planning to carry out the change “carefully and methodically, but purposefully,’’ Gates said yesterday in a statement. He will consult with military leaders, including members of the Joint Chiefs of Staff who raised opposition to changing the law, to ensure the change does not harm military readiness in a time of war.

“It is important that our men and women in uniform understand that while today’s historic vote means that this policy will change, the implementation and certification process will take an additional period of time,’’ he said.

He added that “strong leadership’’ will be required to move to openly gay service in the armed forces. A number of other nations allow gays to serve openly in the military, including Israel, Canada, and Great Britain.

The chairman of the Joint Chiefs, Admiral Mike Mullen, whose call earlier this year to change the law swayed many skeptics, said he believes the US military will be stronger as a result of the congressional action. “No longer will able men and women who want to serve and sacrifice for their country have to sacrifice their integrity to do so,’’ Mullen said.

Senators voting in favor of the repeal yesterday cast the debate as an issue of fairness and civil rights. “I don’t care who you love,’’ said Senator Ron Wyden, an Oregon Democrat. “If you love this country enough to risk your life for it you ought to be able to serve.’’

Republican opponents accused Senate Majority Leader Harry Reid of rushing the bill through the Senate for political reasons; others warned the repeal could undermine “unit cohesion’’ in the military.

“There will be high-fives all over the liberal bastions of America,’’ said Senator John McCain, an Arizona Republican, in sardonic remarks, acknowledging the repeal had the support to pass. “I hope that when we pass this legislation that we will understand that we are doing great damage.’’

Brown was joined in defeating the filibuster by Republican senators Collins and Olympia Snowe, both of Maine; Mark Kirk of Illinois; George Voinovich of Ohio; and Lisa Murkowski of Alaska. Republicans John Ensign of Nevada and Richard Burr of North Carolina supported the repeal measure on its final passage.

Brown declined to discuss the issue yesterday, through his office.

“Senate Republicans including Senator Brown made a vow not to vote on ‘don’t ask don’t tell’ until the budget was resolved, and they broke trust with the people,’’ said Kris Mineau, the group’s president.

“In doing so, they not only have put special interests above fiscal interests but also have put our troops at risk during wartime.’’

But gay rights advocates, who had slammed Brown for opposing the defense bill that contained language to end the policy, heaped praise on him yesterday. The Bay State’s largest gay rights organization, MassEquality, applauded him for crossing party lines “to take an affirmative vote in favor of LGBT equality.’’

Army veteran John Affuso, 43, of Boston, was so moved he phoned Brown’s office yesterday to thank him. Affuso chose not to reenlist in the mid-1990s largely because of the “don’t ask’’ policy.

“It’s about time,’’ said Affuso, who is gay. “I think about the thousands of people whose careers have ended because of this policy. They just wanted to serve their country.’’

Mark Arsenault can be reached at marsenault@globe.com. Bryan Bender of the Globe staff contributed to this report.