Reid hopes deal can be finalized by Wednesday 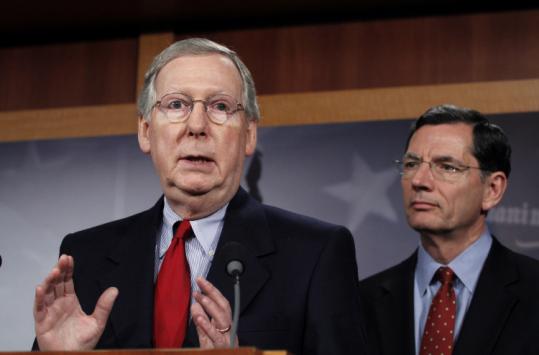 Senator Mitch McConnell said he was relatively confident there would be a deal with the White House on the tax cuts bill. (Harry Hamburg/ Associated Press)
By David M. Herszenhorn New York Times / December 5, 2010

WASHINGTON — The Senate rejected President Obama’s proposal to let tax rates rise for the highest-income Americans yesterday, as Republicans held firm in their push to continue all of the expiring Bush-era tax cuts.

The White House and congressional leaders are now discussing a deal to extend the reduced tax rates at all income levels, at least temporarily, perhaps for two years.

But with Senate Democrats and the White House badly splintered, and some lawmakers increasingly angry at the idea of sustaining President George W. Bush’s economic policies, the prospects of a compromise remained uncertain.

The floor action yesterday highlighted the volatility of the issue. Obama’s plan, approved by the House on Thursday, would have extended the lower rates on income up to $250,000 a year for couples and $200,000 for individuals, but Democrats did not have the 60 votes required under Senate rules to muscle it forward.

Nor could they muster the votes needed for an alternative proposal to end the breaks only on income exceeding $1 million.

Republicans, joined by a handful of Democrats, voted unanimously against both proposals. Most Democrats said that showed them siding with “millionaires and billionaires’’ over the middle class. Republicans said they were refusing to let taxes rise for anyone, given the continuing weakness in the economy.

If Congress does not act, the tax rates expire for everyone Dec. 31, meaning an increase across the board. The rate in the lowest bracket would rise from 10 percent to 15 percent and in the highest bracket from 35 percent to 39.6 percent.

Some Democrats suggested they were willing to let that happen and extend the fight into next year. Obama, while pronouncing himself “very disappointed’’ with the outcome, told reporters he would work through the weekend on a compromise.

The administration and congressional leaders have been discussing a plan that would temporarily extend all of the income tax rates, and include a one-year extension of jobless aid for the long-term unemployed, which has started to run out.

With some congressional Democrats fretting that the administration would give in too easily, senior White House officials said Obama was insisting on the jobless aid and the extension of other tax breaks for middle- and lower-income Americans included in the 2009 stimulus plan as a condition of any deal. Republicans said they were considering those demands.

Many other taxes, including the estate tax, the alternative minimum tax, and taxes on capital gains, interest, and dividends, were also part of the talks.

The formal negotiations were being conducted by senior lawmakers from both parties, along with the Treasury secretary, Timothy F. Geithner, and the White House budget director, Jacob Lew. But there were also direct talks under way between the West Wing and Republicans, including the Senate minority leader, Mitch McConnell of Kentucky.

McConnell accused Democrats of holding show votes for political reasons but said he was optimistic that a solution would be reached before Congress adjourns.

“I am relatively confident that the end of this process will lead us into, I think, a very sensible decision not to raise taxes on anybody in the middle of a recession,’’ he said.

The majority leader, Harry Reid of Nevada, said he was hopeful an agreement would be reached by Wednesday, allowing the Senate to move forward with a busy end-of-year agenda.

But some Senate Democrats were growing increasingly angry at the administration and wary of a deal. In a sign of the deepening divisions, White House officials had voiced opposition to raising the threshold for the tax breaks to $1 million, saying it would do little to reduce the deficit.

The rejection of that proposal underscored a harsh defeat for Democrats in both the policy debate and on the political messaging front. Some of them lashed out at Republicans in response, accusing them of holding tax cuts for the middle class hostage to secure tax breaks for the wealthy.

“I feel like I am in the twilight zone,’’ said Senator Claire McCaskill, a Missouri Democrat. “It’s depressing to me that we have gotten to this level of posturing, that they are saying if you do not give people a tax break on their second million, that nobody gets one.’’

Obama’s preferred plan fell seven votes short of the 60 needed to overcome a filibuster and advance to a simple majority vote. The vote was 53-36, on the bill adopted by the House to end the cuts on income above $250,000 a year for couples and $200,000 for individuals.

Republicans voted unanimously against the bill, and they were joined by four Democrats — Senators Russ Feingold of Wisconsin, Joe Manchin III of West Virginia, Ben Nelson of Nebraska, and Jim Webb of Virginia — as well as by Senator Joe Lieberman, the Connecticut independent.

Republicans insisted that allowing the tax rates to expire for the top two income brackets would further hamper the already tepid economic recovery.