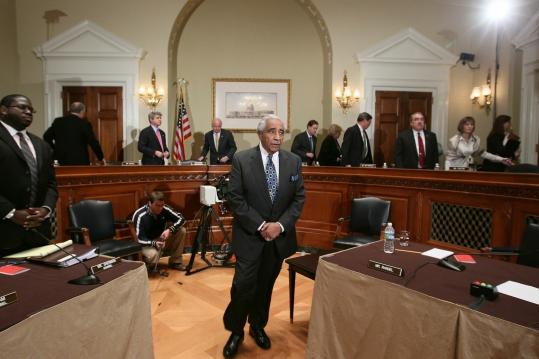 US Representative Charles Rangel after being told the House Committee on Standards of Official Conduct voted to censure him. (Mark Wilson/Getty Images)
By William Branigin Washington Post / November 19, 2010

WASHINGTON — The House ethics committee recommended yesterday that Representative Charles Rangel face a censure for 11 violations of congressional rules related to his personal finances, a penalty that would be a major rebuke for a lawmaker who until recently was one of the most powerful figures in Congress.

The full House must now take up the recommendation, probably after Thanksgiving. No House member has been censured since 1983, when Gerry Studds, Democrat of Massachusetts, and Dan Crane, Republican of Illinois, were punished for sexual misconduct with underage congressional pages.

The committee also recommended requiring Rangel, Democrat of New York, to pay back taxes dating to the early 1990s, though the amount he allegedly owes was not immediately clear.

The 9-to-1 vote came after Rangel appeared before the committee, conceding that he made mistakes in violating House rules but insisting that he was not corrupt and did not seek personal gain. In a final plea before the committee went behind closed doors to consider a prosecutor’s recommendation of censure, Rangel urged his fellow lawmakers to treat him fairly and to absolve him of corruption in their report to the full House.

“I leave the sanction to all of you as it relates to fairness,’’ Rangel said. “I just hope no matter what you decide in the sanctions that you put in that report that Charles Rangel never sought any personal gain.’’

Rangel, 80, said he “admitted wrongdoing’’ as well as “irresponsible behavior as it relates to violations of the House rules.’’ He argued repeatedly, however, that he “didn’t try to hide anything from anybody,’’ and he cited the prosecutor’s statement at his House trial this week that he saw no evidence of corruption in Rangel’s actions.

The prosecutor, committee chief counsel Blake Chisam, recommended that the ethics committee refer the case to the full House for disciplinary action and that Rangel be censured by the House. Censure is a more serious penalty than a reprimand but falls short of the maximum available sanction: expulsion.

Rangel was convicted Tuesday on 11 counts of violating House rules. Those charges included misuse of his office in fund-raising for a college center named after him, the establishment of a campaign office in a subsidized New York apartment, and failure to pay taxes for 17 years on rental income from a beach villa in the Dominican Republic.

The ethics panel has five Democrats and five Republicans.

After reconvening in the afternoon in public session, Representative G.K. Butterfield, Democrat of North Carolina, defended the former Ways and Means Committee chairman, arguing that he should receive a reprimand rather than censure.

“The facts of this case do not warrant a censure in my opinion,’’ Butterfield said. “Censure is extreme. It should be reserved for intentional conduct where the member has derived a personal financial benefit.’’ He said that was not the case in the Rangel matter.

In his appearance before the committee, Rangel declared, “I was not trying to criminally hide anything from the IRS or the Congress. . . . It just wasn’t properly recorded.’’

Before Rangel spoke, Chisam reviewed previous sanctions against House members, including reprimand, censure and expulsion. He told the lawmakers, “Committee precedents do not draw a clear line to determine an appropriate sanction in this case.’’

He later indicated that he felt the penalty should fall somewhere between a reprimand and censure. Given that Rangel served for many years as chairman or ranking member of the committee that writes tax laws, Chisam said, he was recommending that the committee urge the full House to censure Rangel.

Representative Zoe Lofgren, Democrat of California and chairwoman of the ethics committee, said the committee and the House would be guided by precedents. She noted that throughout its history, only five members have been expelled: three for disloyalty to the Union during the Civil War and two after being convicted of felonies.

“It is imperative that we act in a fair and evenhanded manner,’’ Lofgren said.

The top Republican on the committee, Representative Jo Bonner of Alabama, drew Rangel’s ire when he complained that the Harlem congressman’s constituents were denied the opportunity to know the findings of fact against him before they reelected him Nov. 2.

“This process could have and should have been concluded earlier,’’ Bonner said. He charged that the committee had failed the people of Rangel’s district.

Rangel replied, “There was enough derogatory things said about me’’ because of the ethics charges “that you don’t have to feel sorry for my constituents.’’

The House has begun its last series of votes for the week and is not scheduled to return for legislative business until after Thanksgiving.