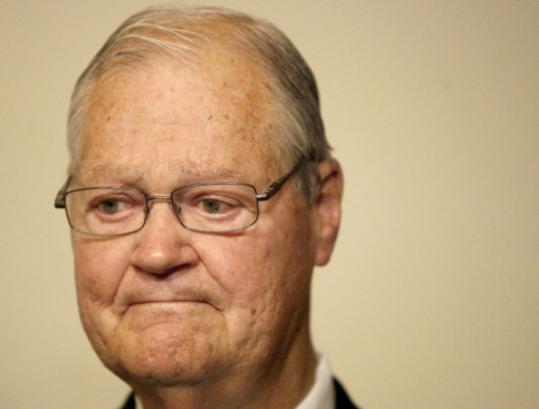 Ike Skelton, who has served in the House representing his west-central Missouri district since 1977, lost to his Republican challenger, Vicky Hartzler, on Tuesday. (Allison Long/Kansas City Star via Associated Press)
By Sam Hananel Associated Press / November 4, 2010

WASHINGTON — Some of the Democratic Party’s heaviest hitters went down in the House on Tuesday, a sign of the breadth and scope of voter discontent with incumbents regardless of their clout or the perks they brought home to constituents.

The shocking upsets included three powerful committee chairmen and a host of others ousted at their peak of influence.

Representative Ike Skelton, a 34-year incumbent and chairman of the House Armed Services Committee, lost his central Missouri seat despite a reputation as a conservative Democrat who won millions for his district’s two military bases.

In South Carolina, John Spratt, House Budget Committee chairman, lost a hard-fought campaign for a 15th term in a district that had not elected a Republican since 1883.

And Jim Oberstar, Transportation Committee chairman and dean of Minnesota’s congressional delegation, succumbed to a political novice after 36 years of seeking more money to fix highways and bridges and bringing pork-barrel projects home.

“When you want to topple a regime, you try to decapitate it, and they have decapitated the leadership of the Democratic Party,’’ said Ross Baker, a congressional scholar at Rutgers University.

All three lawmakers — among the most prominent and respected members of Congress — lost to Republicans who courted Tea Party movement support in districts that have turned increasingly conservative.

National Republican groups targeted the veteran incumbents in part because of their prominence and their links to Democratic leadership, tapping into deep voter frustration over the nation’s economic woes.

Representative John Boehner, Republican of Ohio, in line to be the new House speaker, said voters had sent a message that President Obama needs to “change course.’’

That was the message from Skelton’s opponent, former Missouri House member Vicky Hartzler, who accused the congressman of defying his district too often by voting with House Speaker Nancy Pelosi, Democrat of California.

Spratt was unseated by Mick Mulvaney, a first-term state senator who positioned himself as a Tea Party movement conservative supporting limited government and greater accountability.