Unit tried to defend killing at heart of Afghan probe 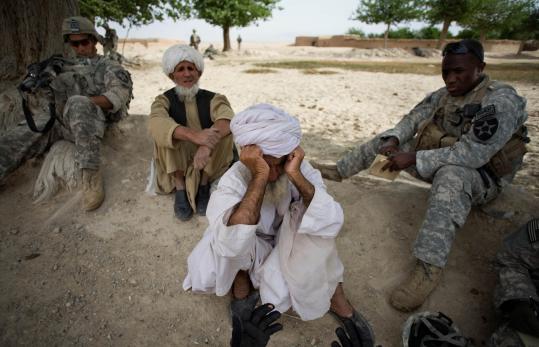 WASHINGTON — Three days after they killed an Afghan cleric named Mullah Adahdad, members of a US Army platoon returned to his village. Tribal elders had complained to Army officers that the cleric had been unarmed and that the May 2 shooting was a setup. The soldiers tried to convince them otherwise.

“This guy was shot because he took an aggressive action against coalition forces,’’ First Lieutenant Stefan Moye, the platoon leader, explained to village residents in Qualaday, in Kandahar province. “We didn’t just [expletive] come over here and just shoot him randomly. And we don’t do that.’’

In fact, Army charging documents now allege that is exactly what soldiers in the platoon did — in perhaps the gravest war crime charges to emerge from the nine-year Afghan conflict. According to the documents, the cleric’s death culminated a months-long conspiracy in which members of a unit of the Fifth Stryker Brigade, Second Infantry Division, randomly targeted and killed three unarmed Afghan men, dismembered corpses, and posed for grisly photographs with their victims.

The attempts to defend the May 2 shooting are detailed in previously undisclosed audio recordings made by a photojournalist embedded with the unit. The recordings, obtained by The Washington Post, demonstrate the extent to which the platoon was concerned about how the killing was perceived among Afghans.

But the recordings also raise questions about why Army commanders did not take those suspicions seriously and failed to notice broader signs of trouble in the platoon until a member of the unit, under investigation for hashish use, tipped off military police. Moye — who has not been charged in connection with the shooting — insisted to villagers in blunt language that members of his platoon had killed the cleric only after he attacked them with a Russian grenade, a version that Army investigators now allege was concocted by other soldiers to cover up the crime.

“Not only is it important that you understand that, but that you tell everybody,’’ Moye said, according to the audio recordings. “Because this is the type of stuff the Taliban likes to use against us and [expletive] try to recruit people to fight against us.’’

Documents from the Army’s Criminal Investigations Command show that military investigators later learned that the photojournalist, Max Becherer, had been with the Stryker platoon on May 5 and had recorded soldiers’ conversations. Army special agents conducting the killing investigation realized Becherer might possess key evidence: recordings of platoon members at the scene of one of the alleged crimes.

But the documents also show that a higher-ranking officer in the Criminal Investigations Command, Lieutenant Colonel Robert McNeil, ordered special agents not to contact Becherer. The reason: concerns that notifying the journalist might disrupt the serial killing probe, which the Army had sought to keep tightly under wraps.

McNeil decided on June 12 that “the probative value of any information’’ that Becherer might have “does not out way [sic] the possible negative impact contacting him may have on this investigation,’’ according to summary logs of the Army’s criminal investigation.

After seeing Becherer’s name in the documents, the Washington Post independently contacted him and obtained his audio recordings. The photojournalist, currently embedded with another Army unit in Afghanistan, said the Army never contacted him and that he had been unaware his materials were considered potential evidence in the case.

Christopher Grey, a spokesman for the Army’s Criminal Investigations Command at Fort Belvoir, Va., said special agents did not contact Becherer because he was embedded with the unit only after the May 2 killing.

“The decision to contact personnel [reporters or otherwise] on the off chance that he or she may have some information bearing on an open criminal investigation is a decision that investigators face every day,’’ Grey said in an e-mail. “They must weigh the risk of potentially compromising an ongoing investigation with obtaining evidence necessary to establish that a crime took place.’’

The Army has built its criminal case almost exclusively on videotaped confessions and other statements obtained from members of the Fifth Stryker Combat Brigade, including two of the soldiers charged with killing the cleric.

As the cases make their way through the military justice system, defense lawyers are seeking to toss out their clients’ confessions. The lawyer for Specialist Jeremy Morlock, one of three soldiers accused of killing the cleric, has said his client was under the influence of heavy medication when he was interrogated.

“Once they got the statements out of the witnesses, they stopped doing any real investigative work,’’ said the lawyer, Michael Waddington. “It’s clear they wanted it to be a quick, clean conviction with a couple of confessions.’’