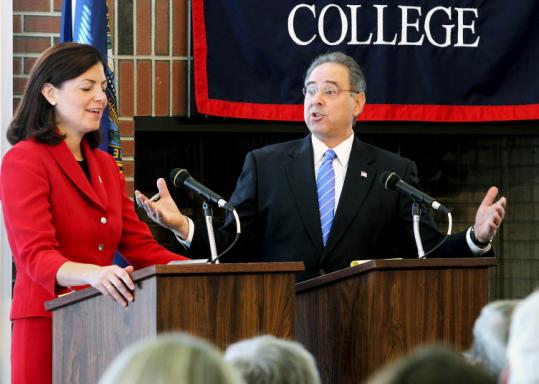 WASHINGTON — Carl Paladino, the volatile GOP candidate for governor of New York, refused to step back yesterday from his comments disparaging gays over the weekend, saying that children should not attend gay pride parades because they featured men in bikinis “grinding at each other and doing these gyrations.’’

In appearances before Orthodox Jewish groups Sunday in Brooklyn, the Buffalo developer and Tea Party-backed candidate created an uproar by saying that children should not be “brainwashed into thinking that homosexuality is acceptable.’’

He also took a swipe at his opponent, Attorney General Andrew Cuomo, for marching in a gay pride parade with his children.

He spoke as the state was still absorbing the news that nine young men had lured a gay man and two teenagers to a building and for hours savagely beat, tortured, and raped them with a baseball bat.

The National Gay and Lesbian Task Force denounced Paladino’s comments as “hurtful and dangerous . . . in a time when antilesbian, gay, bisexual and transgender violence has risen in New York City.’’

“Preaching hate from our pulpits, in our politics, or to our pupils is simply unacceptable. It literally endangers lives,’’ said Rev. Rebecca Voelkel, faith director of the task force.

Cuomo’s campaign called Paladino’s remarks evidence of “stunning homophobia and a glaring disregard for basic equality. These comments along with other views he has espoused make it clear that he is way out of the mainstream and is unfit to represent New York.’’

Paladino said that although he does not support gay marriage, he is not a bigot and that he would hire gays.

Paladino, who trails Cuomo in polls, has a proven penchant for controversial comments and bizarre behavior. Last week, he got into an altercation with a New York Post reporter and threatened to take him out. He has suggested reporters look into Cuomo’s personal life and has sent pornographic e-mails to friends and co-workers.

Paladino said on “Today’’ that he did not regret his remarks on homosexuality. He said he once stumbled upon a gay pride parade.

“It wasn’t pretty,’’ Paladino said. “It was a bunch of very extreme-type people in bikini-type outfits grinding at each other and doing these gyrations, and I certainly wouldn’t let my young children see that.

“Young children should not be exposed to that at a young age. They don’t understand; it’s a very difficult thing,’’ said Paladino. — WASHINGTON POST

Ayotte, Hodes trade attacks over taxes
HENNIKER, N.H. — Republican Senate candidate Kelly Ayotte cast herself yesterday at her first debate with Democratic Representative Paul Hodes as a Washington outsider who would cut taxes, while Hodes accused her of not thinking of the pain that spending cuts could cause.

At their debate at New England College in Henniker, Ayotte described herself as a conservative New Hampshire native unafraid to reduce spending and taxes while maintaining a dump-the-incumbent line of attack popular in races nationwide this year.

“We don’t need someone who votes like a liberal in Washington, then comes to Henniker and claims to be conservative,’’ Ayotte said of Hodes.

Hodes criticized Ayotte for wanting to cut spending — such as her call to repeal health care reforms — without considering what harm could ensue.

“New Hampshire needs an independent senator in Washington to break through the gridlock,’’ Hodes said.

The two sparred over whether to extend George W. Bush-era tax cuts. Hodes supports the extension for all but the wealthy. Ayotte said that would hurt thousands of small-business owners whose profits are treated as income under tax laws.

Hodes accused Ayotte of inflating the impact and of wanting to give tax breaks to businesses that will mean sending jobs overseas. Ayotte shot back that he was misrepresenting her position.

They debated whether he missed too many votes since announcing his bid for Senate and whether she let citizens down as attorney general for not stopping a Ponzi scheme that cost investors millions of dollars.

Ayotte was attorney general when complaints surfaced about the now-defunct mortgage firm involved in the scheme, but the complaints were sent to the state Banking Department, which has jurisdiction over such matters. She said she was proud of her tenure as attorney general and said the lesson learned from the scheme was for government to have clear lines of jurisdiction.

Hodes said he had a 95 percent voting record in Congress.

They also differed on gay rights. Ayotte said she opposes gays adopting children or marrying — both of which are legal in New Hampshire — but that she supports the state’s right to set those policies. Hodes supports gay marriage and adoption as important equality rights. — ASSOCIATED PRESS

Obama tells Fla. Democrats GOP threatens his agenda
CORAL GABLES, Fla. — President Obama implored Democrats yesterday to remember why they sent him to the White House and told supporters that a Republican-led Congress would prevent him from accomplishing his agenda.

“I can only succeed if I’ve got help,’’ Obama said during remarks at a high-dollar fund-raiser at an oceanfront estate in South Florida.

Obama said that although he would like to believe that Republicans would work with him, he’s “not optimistic.’’

With unemployment at 9.6 percent, Obama said he knows Americans are frustrated. But he said the Nov. 2 midterm elections shouldn’t be a referendum on where the country is now, but a choice between which party can get the country to where it needs to be.

Relying on a familiar refrain during his campaign appearances this fall, Obama said Republicans have a “lack of ideas’’ and a “fundamental lack of seriousness’’ about how to lead the country in the right direction.

The event at the home of former basketball star Alonzo Mourning was expected to raise about $1 million for the Democratic Congressional Campaign Committee and Representative Ron Klein, who is locked in a tight race to hold his House seat. — ASSOCIATED PRESS