Mass. may lose congressional seat in ’12 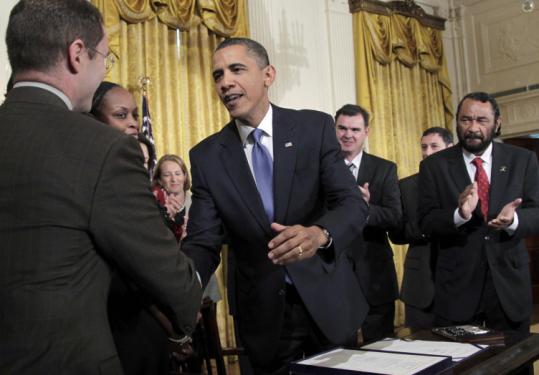 WASHINGTON — Massachusetts is expected to be one of 10 states to lose congressional seats in 2012 as a result of shifting populations, according to a new study.

Texas would be the biggest beneficiary, gaining four seats, with Florida in line for two more seats, and one each for Arizona, Georgia, Nevada, South Carolina, Utah, and Washington.

The reapportionment process will begin after the census numbers are released, probably in late December. Each state will then have to draw new congressional districts in time for the 2012 elections.

The prediction is not a surprise for the Commonwealth. State officials and members of the 10-seat Massachusetts delegation have been aware of such a likelihood for months.

There were, however, some unexpected projections in the report. “We were most surprised at the shift of an additional district out of New York and down to Florida, even though that follows the population movement in this country since World War II,’’ said Kimball Brace, president of the election data firm.

No other state in New England would be affected, although Rhode Island is only narrowly expected to keep both of its congressional districts; if the census numbers come in lower than expected, it could lose one of those seats.

In Massachusetts, the Legislature redraws the districts, which could lead to two incumbents facing off in the primaries in 2012.

Election Data Services released the study this past weekend at a redistricting seminar of the National Conference of State Legislatures in Providence. — MATT VISER

Emanuel may announce his decision this week
WASHINGTON — White House chief of staff Rahm Emanuel, widely expected to leave the White House to make a long-coveted run for Chicago mayor, could make an announcement on his decision as soon as Friday, a source close to him told the Associated Press.

Emanuel has not made a final decision, said the person familiar with Emanuel’s thinking, who spoke on condition of anonymity for that reason. The dominant factor at this point is the impact the move and the campaign would have on Emanuel’s wife and three young children, who live with him in Washington, the source said.

Emanuel has told colleagues that he probably will run for mayor of Chicago, CNN reported, citing Democratic sources close to the White House chief of staff.

Obama said the incentives will help businesses right away. But any hiring may not be enough to help some Democrats before crucial midterm elections in which voters are expected to vent their frustrations over a slow-growing economy and high unemployment.

The bill had been delayed for months, blocked in the Senate by Republicans. Most in the GOP objected to the loan fund, comparing it to the 2008 financial industry bailout. Two GOP senators, George Voinovich of Ohio and George LeMieux of Florida, helped Democrats break the filibuster this month, and the bill passed.

Obama said small businesses are “the anchors of our Main Streets,’’ creating most of the jobs in the country.

“It was critical that we cut taxes and make more loans available to entrepreneurs,’’ he said before signing the bill in the East Room of the White House. “Today, after a long and tough fight, I am signing a small business jobs bill that does exactly that.’’ — ASSOCIATED PRESS