In ‘Pledge to America,’ GOP vows to stop Obama’s efforts 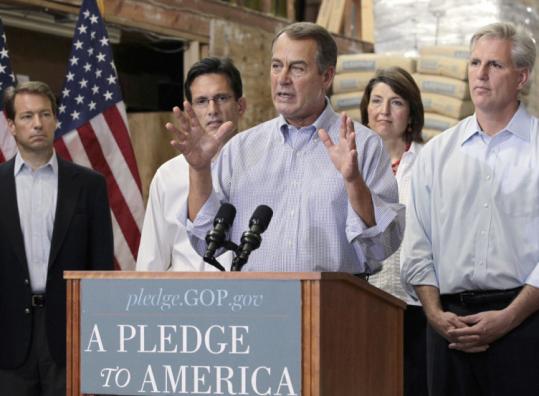 WASHINGTON — Republicans long have chafed under criticism from President Obama that they are “the party of no.’’ What their new campaign blueprint shows is that, if they take control of the House, Republicans will become “the party of stop.’’

At its heart, the “Pledge to America’’ represents a promise to stop Obama in his tracks — stop the stimulus, stop the financial bailout program, repeal the health care law, stop other spending, and stop the proposed repeal of tax cuts for the wealthiest Americans.

GOP leaders do hope their pledge will show voters they have plenty of ideas of their own. Like the “Contract With America’’ that Republicans under Newt Gingrich issued 16 years ago, the pledge is designed not only to give candidates concrete proposals to include in campaign ads this fall but also to help them hit the ground running if the GOP becomes the majority party.

The pledge is a political document in the guise of a governing agenda. If there are any real surprises in the blueprint for conservative government, they come in the form of pulled punches rather than new initiatives.

The document is filled with rhetorical flourishes that echo language heard for the past year from Tea Party activists around the country. Its opening paragraphs bow to the Declaration of Independence and the Constitution and describe Washington much the way Colonialists once described King George III.

Washington is portrayed as arrogant and out of touch, ruled by “self-appointed elites’’ who are willfully ignoring the people’s interests. Consider this statement on the opening page of the pledge: “In a self-governing society, the only bulwark against the power of the state is the consent of the governed, and regarding the policies of the current government, the governed do not consent.’’

That sets up the contrast Republicans have been trying to draw for November’s elections, when the GOP hopes to capitalize on the frustration of Americans over the lack of significant progress in turning around the economy and the backlash on the right against the growth in the size and scope of government.

The overall thrust of the pledge is a call for smaller and limited government. Republicans have embraced many of the easy proposals — easy in the sense that they are broadly popular within their coalition. They include extending all the Bush tax cuts and overturning Obama’s health overhaul.

But there is a paragraph halfway through the pledge that sums up the limits of their willingness to wade into controversial territory. Under the title of “Reforming the budget process to focus on long-term challenges,’’ Republicans say this:

“We will make the decisions that are necessary to protect our entitlement programs for today’s seniors and future generations. That means requiring a full accounting of Social Security, Medicare, and Medicaid, setting benchmarks for these programs, and reviewing them regularly and preventing the expansion of unfunded liabilities.’’

That paragraph neatly skirts one of the toughest challenges facing both parties in the years ahead, and one that may come quickly to the fore when the president’s debt commission issues its recommendations at the end of this year.

Identifying the scope of the long-term financial liability is one thing. Offering solutions, whether through raising the Social Security retirement age, changing the cost-of-living formula, or other measures to put the system into long-term balance is another. Faced with an opportunity to offer voters a clearer indication of how they would tackle entitlements, Republicans flinched.

There are other gaps. Republicans promise to establish “hard caps’’ on new discretionary spending. That, they say, will save hundreds of billions of dollars. Extending the tax cuts for the wealthiest Americans, however, would cost an estimated $700 billion.

The pledge sets no specific targets for reducing or eliminating the deficit, promising only “a responsible, fact-based conversation with the American people about the scale of the fiscal challenges we face and the urgent action that is required to deal with them.’’