Joint Forces Command to be closed 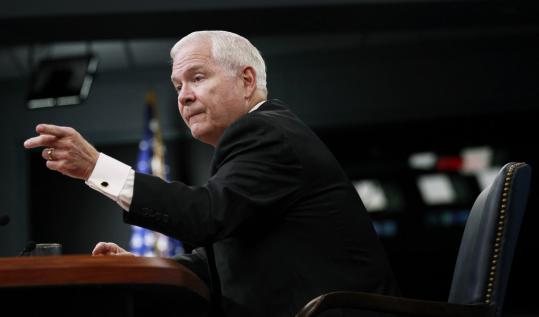 Secretary of Defense Robert Gates said at a press conference he was optimistic Congress would eventually back his budget cuts. (Manuel Balce Ceneta/Associated Press)
By Anne Gearan Associated Press / August 10, 2010

WASHINGTON — Defense Secretary Robert Gates said yesterday that tough economic times require that he shut a major command that employs some 5,000 people around Norfolk, Va., and begin to eliminate other jobs throughout the military.

The announcement was the first major step by Gates to find $100 billion in savings in the next five years. Gates says that money is needed elsewhere within the Defense Department to repair a force ravaged by years of war and to prepare troops for the next fight.

The plan prompted swift political pushback from lawmakers fearful that jobs would be lost in their districts.

“At the end of the day, Secretary Gates and his team will have to convince members of this committee that these efforts will not weaken our nation’s defense,’’ said Representative Buck McKeon of California, the top Republican on the House Armed Services Committee.

Senator Mark Warner, a Virginia Democrat, said he could see “no rational basis’’ for eliminating Norfolk’s Joint Forces Command, which works to improve the services’ ability to work together and find efficiencies. “In the business world, you sometimes have to spend money in order to save money,’’ said Warner.

Senator Jim Webb, a Virginia Democrat who sits on the Senate Armed Services Committee, called the move a “step backward’’ that “could be harmful to the capabilities of the finest military in the world.’’

In a Pentagon press conference, Gates was optimistic that Congress would eventually back his plan despite lawmakers’ control of the budget. He said in the case of Virginia, the state could wind up with additional jobs if the savings found by closing Joint Forces Command enables a boost in shipbuilding.

Eliminating the Joint Forces Command would take the backing of President Obama, who applauded the overall belt-tightening in a statement yesterday but did not mention the command or two smaller offices set for closure.

“The funds saved will help us sustain the current force structure and make needed investments in modernization in a fiscally responsible way,’’ Obama said. “Change is never easy.’’

Gates had pledged earlier to cut the operating budget of the military to offset the costs of the Iraq and Afghanistan wars and rising domestic spending.

The Joint Forces Command trains troops from all services to work together for specific missions. It tries to make sure equipment used by different services is compatible and looks for gaps in capabilities within military services that could be filled by a specially trained joint force.

Gates described his initiative as just the beginning in his hunt for inefficiencies across the Defense Department, which commands an annual budget of nearly $700 billion including war spending.

Gates vowed to review every corner of the budget, including the military’s rising health care costs. “There are no sacred cows,’’ Gates said.

In addition to shutting down Joint Forces Command, Gates wants to:

■ Trim by 10 percent the budget for contractors who support the Defense Department.

■ Freeze the number of employees working for his office, defense agencies, and combatant commands for the next three years.

■ Cut at least 50 general and flag officer positions and 150 senior civilian executive positions over the next two years.

Gates declined to say how much money would be saved by shutting down the command, which holds more than 1 million square feet of real estate in Suffolk, Va., and Norfolk, Va. Savings will be offset by the cost of shifting some jobs and roles elsewhere, he said.

The Joint Forces Command is headed by a four-star military officer, the highest grade currently in use. Marine General James Mattis was its commander until he was named last month to replace Army General David Petraeus as head of US Central Command. His replacement will be General Ray Odierno, now the war commander in Iraq.

The plan Gates outlined was similar to one suggested last month by the Defense Business Board, a panel of company executives who advise the Pentagon. The panel identified Joint Forces Command as contributing to much of the contractor bloat because it had more contractors than government employees on its payroll.