Kagan sworn in as 112th justice in ceremony 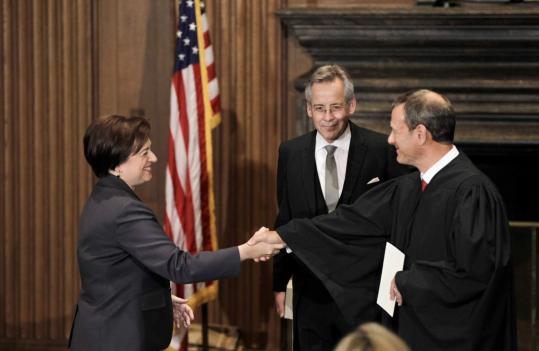 WASHINGTON — At least once a term for 13 years, Justice Ruth Bader Ginsburg recalled, some lawyer arguing before the Supreme Court would mistake her for Justice Sandra Day O’Connor, or vice versa.

No matter that Brooklyn-born Ginsburg and O’Connor, raised on a ranch in Arizona, look and sound nothing alike.

The confusion arose because, even at the dawn of the 21st century, women on the court were “one- or two-at-a-time curiosities,’’ Ginsburg said.

So she considered it progress that no one made that error after Sonia Sotomayor became a Supreme Court justice last year.

Now that Elena Kagan will join them on the bench for the start of the high court term in October, Ginsburg perceives an even bigger change: Having women justices has become “expectable.’’

We are one-third of this court. . . . I don’t think anybody’s going to confuse Justice Kagan, Justice Ginsburg, or Justice Sotomayor,’’ Ginsburg said in an interview.

Kagan was sworn in yesterday as the 112th justice and fourth woman ever to serve on the Supreme Court. Chief Justice John G. Roberts administered the oath to her in a brief private ceremony at the court. Kagan, joined by family and friends, pledged to uphold the law faithfully and impartially.

Afterward, she smiled broadly as a crowd of onlookers stood and applauded. “We look forward to serving with you,’’ Roberts said.

Kagan, 50, a former Harvard Law School dean who most recently was solicitor general, was President Obama’s choice to succeed retired Justice John Paul Stevens. Republicans criticized her as a political liberal before the Senate confirmed her last week on a vote of 63 to 37.

She was sworn in twice by Roberts — first reciting one oath as prescribed by the Constitution during a ceremony in a conference room at the court with only her family present. Kagan then recited a second oath, taken by judges, with her family and friends and reporters present.

Kagan won’t be formally installed as a justice until Oct. 1 in a courtroom ceremony at the start of the court’s new term. But after the oaths taken yesterday, she will be able to begin assuming her duties as a justice, which include reviewing cases and emergency appeals.

Kagan isn’t expected to alter the ideological balance of the court, where Stevens, who retired in June, was considered a leader of the liberals. The justices, after all, regularly divide 5-4 along ideological lines in high-profile cases. And Sotomayor’s votes in her first year were very similar to Justice David Souter’s, the man she replaced.

“Having this seat occupied by a woman does not in and of itself change the way this justice votes,’’ said Vanderbilt University law professor Tracey George.

But it could have an effect on how the court goes about its business, George said. She cited social science research that suggests the presence of a woman in a decision-making group influences the behavior of others in the group.

Academic studies have found just one area, sex discrimination lawsuits, in which the presence of a woman on a panel of federal appeals court judges appears to make a difference. A three-judge panel that includes a woman “is significantly more likely to rule in favor of’’ a person asserting sex discrimination, Christina Boyd, Lee Epstein, and Andrew Martin concluded in a 2008 paper.

Ginsburg cited one case before the justices in 2009, where a 13-year-old girl complained about being strip-searched by officials at her middle school in Arizona in pursuit of prescription-strength ibuprofen. Ginsburg may have changed some minds on the court. The justices voted, 8 to 1, that the search violated the student’s constitutional rights.