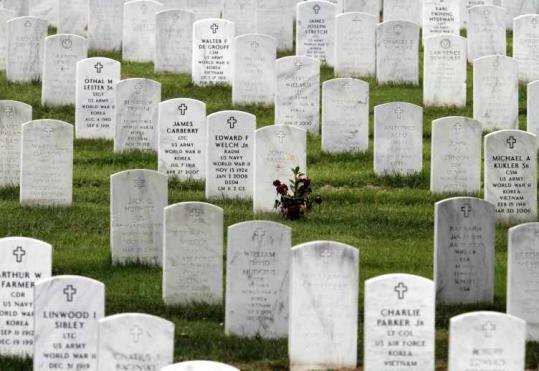 As many as 6,600 graves may be unmarked or mislabeled on Arlington National Cemetery maps, a US senator said. (Jacquelyn Martin/Associated Press)
Associated Press / July 30, 2010

WASHINGTON — Estimates of the number of graves potentially affected by mix-ups at Arlington National Cemetery grew to as many as 6,600 yesterday, as the cemetery’s former superintendent blamed his staff and a lack of resources for the scandal that forced his ouster.

John Metzler, who ran the famous military burial ground for 19 years, said he accepts “full responsibility’’ for the problems.

But he also rebutted some findings of Army investigators, and he suggested cemetery employees were to blame for mix-ups because the system used to track grave sites relied mostly on a complicated paper trail vulnerable to error.

“Personally it is very painful for me that our team at Arlington did not perform all aspects of its mission to the high standard required,’’ he told a Senate panel. He was subpoenaed to testify.

Metzler and his deputy, Thurman Higginbotham, were forced to retire after Army investigators found that as many as 211 graves were unmarked or misidentified.

Senator Claire McCaskill, chairwoman of an oversight panel on the Senate Homeland Security and Government Reform Committee, said yesterday that her investigation has revealed far higher estimates of the number of graves affected. McCaskill, a Missouri Democrat, said she believes that between 4,900 and 6,600 graves may be unmarked or mislabeled on cemetery maps. She blamed Metzler.

He provided an often confusing defense, saying that internal working maps used by cemetery employees were mislabeled, but that those discrepancies wouldn’t necessarily affect operations.

He also said any problems that popped up over the years were quickly fixed and suggested he was surprised by the findings of the Army’s Inspector General.

His testimony angered lawmakers. “The notion that you would come in here and didn’t know about it until a month ago is offensive. You did know about it, and you did nothing,’’ McCaskill said.

A visibly frustrated Senator Scott Brown abruptly ended his questioning. “I’d have a lot of fun with you in a deposition, because I don’t think we’re getting straight talk here,’’ said Brown, Republican of Massachusetts.

Higginbotham testified in general about his tenure at the cemetery but left the hearing early after asserting his Fifth Amendment right not to respond to many of the lawmakers’ more pointed questions.

When asked whether he was aware of problems at the cemetery, Higginbotham said, “It was always conceptual that anything done by hand for 40-plus years that there would have to be some errors somewhere.’’