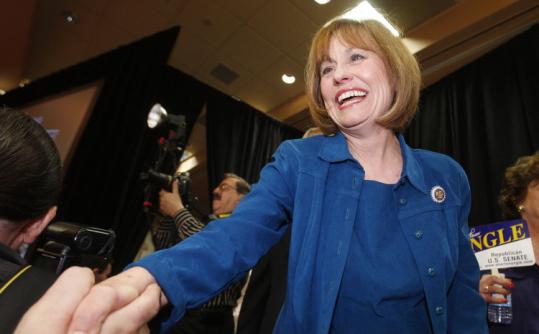 The Massachusetts Republican had been a key target of Senate Democrats seeking to pass the Disclose Act. The measure is a response to the ground-shifting Supreme Court ruling in January that lifted most restrictions on corporate and union funding of political advertisements.

Brown argues that the new legislation would particularly help Democrats and would be implemented several months before crucial midterm elections.

“Rather than reform our campaign finance laws and provide increased transparency, the Disclose Act advances the political agenda of the majority party and special interests in an effort to gain a tactical and political advantage little more than 100 days before an election,’’ Brown wrote in a letter to organizations that had lobbied him to support the bill.

The measure was approved last month in the House, but it has yet to gain the 60 votes needed in the Senate to overcome a Republican filibuster.

Brown’s decision was denounced by supporters of the bill.

“It is very disappointing that Senator Brown is repeating the same old Washington excuses after just a few months in office,’’ Elisabeth MacNamara, national president of the League of Women Voters, said in a statement. “He says the legislation is partisan. This is the oldest dodge in Washington. As a nonpartisan group, we in the League of Women Voters say that this bill is not partisan and requires disclosure fairly from all.’’

“His leaders in Washington are opposed to transparency, but he campaigned with the people of Massachusetts as a different kind of politician,’’ she said. “He can’t represent both the old ways of Washington and the new spirit of government responsibility and transparency.’’

Senate Democrats to seek smaller energy package
WASHINGTON — President Obama and Senate Democrats have decided to press ahead in the next two weeks with a scaled-back energy bill that limits carbon pollution by power plants but not by other industries in an effort to salvage the legislation before midterm elections.

After months of gridlock, the White House and Democratic leaders have concluded that the sweeping measure they once envisioned cannot pass, so they will try to get what they can rather than pass nothing at all. The developing plan is intended to appeal to enough Republicans to overcome a filibuster but could disappoint liberals who argue that more needs to be done.

“If not now, when?’’ said Senator Harry M. Reid of Nevada, the Democratic majority leader, who plans to bring the compromise bill to the Senate floor next week. “We have to move to do something about our dependence on foreign oil. That’s what this legislation is all about.’’

Reid also presented it as a way to further stimulate the economy, saying, “This, as I’ve indicated, is a huge jobs bill.’’

While the House last year passed a measure capping the greenhouse gases blamed for climate change across the economy, the White House and its Senate allies will push only to limit those from electric utilities, which are responsible for about a third of the emissions produced by the United States.

Such a measure would allow Obama to make a down payment on his larger goal. “He’s always believed there should be an economywide solution but recognizes that may not be where we are,’’ said Carol M. Browner, the president’s energy and climate adviser. “Getting started is hugely important.’’

It remains far from certain, however, that Obama and Reid can win passage even for the limited legislation. Most Republicans remain firm in their opposition to any cap on emissions, and six Democrats recently joined an effort by Senator Lisa Murkowski, Republican of Alaska, to pass a resolution criticizing new Environmental Protection Agency rules relating to greenhouse gases.

Angle says campaign against Reid is a calling
LOS ANGELES — Republican Sharron Angle says her campaign to unseat Senate majority leader Harry Reid in Nevada is a calling from God and that her faith is helping her endure a fiercely competitive race in which Democrats have depicted her as a conservative extremist.

“When you have God in your life . . . he directs your path,’’ Angle told the Christian Broadcasting Network in an interview posted on its website yesterday.

“When God calls you He also equips you and He doesn’t just say, ‘Well today you’re going to run against Harry Reid,’ ’’ said the favorite of the Tea Party movement.

Angles said her years in public office prepared her as her preparation for the race. “God knew all of this in advance,’’ Angle added. “I don’t know what’s coming up tomorrow but I do know that He is there.’’

In a wide-ranging interview, Angle said her media appearances are guided by the need to raise money for her campaign and she defended an overhaul of her campaign website in which many of her earlier positions on Social Security and other issues were rewritten, condensed or deleted.

Angle, a Southern Baptist, has called herself a faith-based politician who prays daily. Among her positions, she opposes abortion in all circumstances, including rape and incest.