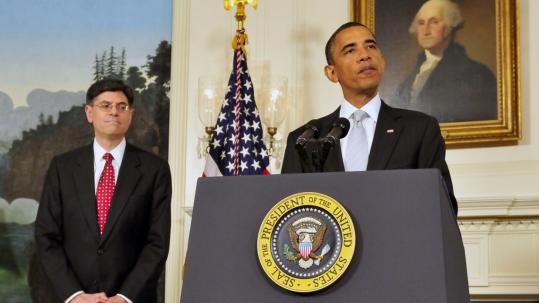 Obama yesterday tapped Jack Lew as director of the Office of Management and Budget, saying Lew, who led the OMB under Clinton, can “put our nation back on a fiscally responsible path.’’ (Ron Sachs/Bloomberg/Pool)
July 14, 2010

Lew, who worked for Representative Joseph Moakley and former House speaker Thomas P. “Tip’’ O’Neill in the 1970s and ’80s, has a long record of public service, serving as both deputy director and director of OMB during the Clinton administration.

The 54-year-old Lew is currently a top aide to another Clinton — Secretary of State Hillary Rodham Clinton — and would replace outgoing OMB director Peter Orszag.

“I was actually worried that Hillary would not let him go,’’ Obama said in the Diplomatic Reception Room at the White House yesterday, introducing Lew. “I had to trade a number of No. 1 draft picks to get Jack back at OMB.’’

When he worked for Bill Clinton, Lew presided over a substantial budget surplus.

If he goes back to his old job, Lew will have to wrangle with the biggest budget deficit in history, forcing him to look for more cuts and revenues to reach the president’s ultimate goal of a reduced deficit.

“Jack’s challenge over the next few years is to use his extraordinary skill and experience to cut down that deficit and put our nation back on a fiscally responsible path. And I have the utmost faith in his ability to achieve this goal as a central member of our economic team,’’ Obama said.

Democrats have enough votes to pass finance bill
WASHINGTON — President Obama has secured the 60 votes he needs in the Senate to pass an overhaul of financial regulations, all but ensuring that he soon will sign into law one of the top initiatives of his presidency.

With the votes in hand to overcome Republican delaying tactics, Senate majority leader Harry Reid took steps yesterday to end debate on the bill, setting the stage for final passage, perhaps tomorrow. The House already has passed the bill.

“This reform is good for families, it is good for businesses, it’s good for the entire economy,’’ Obama said as he prodded the Senate to act quickly.

Passage would represent a signature achievement for the president four months after he signed massive health care legislation into law. The final vote comes amid lingering public resentment of Wall Street, but the legislation’s symbolic and political impact is likely to be diminished by anxiety across the country over jobs and the economy.

“It triggered the recession,’’ he said. “It’s what suffocated the job market and robbed trillions of dollars of people’s savings — trillions.’’

Support for the bill jelled yesterday after conservative Democratic Senator Ben Nelson of Nebraska confirmed he would vote for the bill after raising concerns the previous day.

Obama noted that the bill is getting backing from Republican Senators Scott Brown of Massachusetts and Olympia Snowe and Susan Collins, both of Maine. Snowe and Brown announced their support on Monday.

“Three Republican senators have put politics and partisanship aside to support this reform, and I’m grateful for their decision,’’ Obama said.

The 2,300-page bill aims to address regulatory weaknesses blamed for the 2008 financial crisis that fueled the worst recession since the 1930s.