Kagan vote will be a telling test for Brown

Either way, he will irk some backers 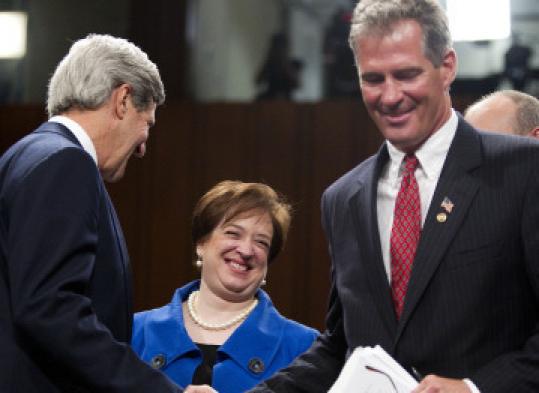 WASHINGTON — The upcoming vote on the Supreme Court nomination of former Harvard Law School dean Elena Kagan will present Republican Scott Brown with the most defining ideological test yet of his young Senate career, forcing him into a stark choice that is bound to anger some of his supporters no matter how he decides.

Kagan’s solid performance during committee hearings last week all but assures her confirmation by a comfortable margin, so Brown is not in a position to affect the outcome. But analysts say the political stakes are high for Brown personally.

If he supports her, Brown risks angering conservative activists across the country, an important source of campaign contributions. If he opposes such a highly accomplished woman with strong Massachusetts ties, the state’s independents, particularly women, may question his assertion that being a “Scott Brown Republican’’ does not automatically mean toeing the GOP line.

Brown has not made up his mind on Kagan’s nomination, according to his staff, and he declined yesterday to comment on the confirmation vote or the political implications. Her nomination is expected to reach the Senate floor for a decision before the August recess, perhaps as early as next week.

While issues such as Wall Street regulations and the health care overhaul have helped Brown present himself as a fiscally conservative moderate, a high-court choice will offer the public a clearer indication of which side of America’s ideological divide Brown is on, said Jeffrey Berry, a political science professor at Tufts University.

“Threading the needle is going to be increasingly difficult for him,’’ Berry said. “He’s going to have to come up with a compelling explanation, one way or the other, for why he voted for or against Kagan.’’

Brown has said little recently about Kagan on the record. When Massachusetts’ sitting senators, designated by Kagan as her home-state delegation, formally presented the former Harvard dean to the Judiciary Committee, Democrat John F. Kerry gave Kagan a glowing introduction and an endorsement. Brown, in contrast, offered the bare highlights of her résumé with no hint of support or opposition.

Kagan, a former lawyer and policy adviser in the Clinton administration, is the sitting US solicitor general; her confirmation would bring the number of women on the Supreme Court to three, the most in history.

Since winning his special election in January, Brown, who supports abortion rights but opposes gay marriage, has been a moving target for those trying to pin down his ideology: He sided with Republicans against the health care overhaul, but joined Democrats on a jobs bill. He helped move financial overhaul legislation through one phase of passage, then threatened to stymie it at another.

But in deciding whether to support President Obama’s court nominee, there’s no room to hedge.

Conservatives outside Massachusetts have played a large role in Brown’s prolific fund-raising. Of the $6.6 million Brown has raised from individuals donating $200 or more, about $4.3 million has come from out-of-state, according to the Center for Responsive Politics. Conservative blogs have been hammering Brown for compromising with Democrats on a jobs bill and financial overhaul legislation.

But Christen Varley of Holliston, president of the Greater Boston Tea Party — a conservative group of 2,000 members, many of whom helped Brown’s campaign — said her members may be politically practical enough to cut Brown some slack if he supports her.

For Kagan supporters, a Brown vote in opposition would seem like thinly veiled pandering to conservatives, said Nan Aron, president of the Alliance for Justice, a left-leaning advocacy group.

“If he voted against her, it would be a purely political vote, putting politics ahead of the enormous respect she has from lawyers, judges, and lawmakers on both sides of the aisle,’’ he said.

In beating Democrat Martha Coakley in January, Brown won two-thirds of critical independent voters, according to exit polls. Independents, many of whom lean left politically in Massachusetts, will again be a key constituency in 2012.

“Due to the lack of concrete issues with Kagan’s candidacy offered by her critics, it would be difficult for Brown to vote against Kagan and not expect some electoral consequences particularly among independents and female voters who turned out for Brown’’ in his race against Coakley, said Tatishe Nteta, political science professor at University of Massachusetts Amherst.

Obama nominated Kagan, 50, in May to fill the seat of Justice John Paul Stevens, now retired. The Senate Judiciary Committee’s hearings on Kagan’s nomination included some 17 hours of testimony from the nominee.

Senator Sheldon Whitehouse, Democrat of Rhode Island, said in an interview that he expects GOP opponents to spend several days attacking Kagan on the floor. The attacks, however, like much of the conflict on the committee, will be more about the ideological fault lines separating Democrats and Republicans than about Kagan’s philosophies and qualifications, Whitehouse said.

He expects Republicans to try to cast Kagan as a left-wing activist ideologue. Democrats will fight back by arguing that activism cuts two ways. Throughout Kagan’s confirmation hearings, Democrats accused the current Supreme Court’s conservative bloc of pushing a right-wing agenda.

Senator Charles Grassley, Republican of Iowa, predicted the floor debate would last about three days. Kagan is likely to get some GOP support. Senator Lindsey O. Graham, Republican from South Carolina and a member of the Judiciary Committee, spoke highly of Kagan’s performance before the committee.

No Republicans have announced that they will support Kagan. Nine Republicans last year bucked party leadership and supported the confirmation of Obama’s first pick for the court, Sonia Sotomayor.

One of them, Senator Susan M. Collins of Maine, last week hinted at support for Kagan in a complimentary statement, saying, in response to an inquiry from the Globe, that she was pleased with Kagan’s testimony that courts have a lesser role than Congress in lawmaking.

Senator Olympia J. Snowe of Maine has not made up her mind, according to her office. Messages left for press aides for the other Republican senators who supported Sotomayor last year were not returned.

Conservative groups are pumping up the pressure on undecided senators.

The National Rifle Association, which endorsed Brown in his campaign, came out against Kagan on Thursday. But it remains to be seen, said spokesman Andrew Arulanandam, whether a “yes’’ vote on Kagan would cost Brown NRA support.

“We look at the record in its entirety,’’ he said. ’’We look at everything that matters.’’

Mark Arsenault can be reached at marsenault@globe.com; Susan Milligan at milligan@globe.com.