Russia and US ‘resetting’ relations 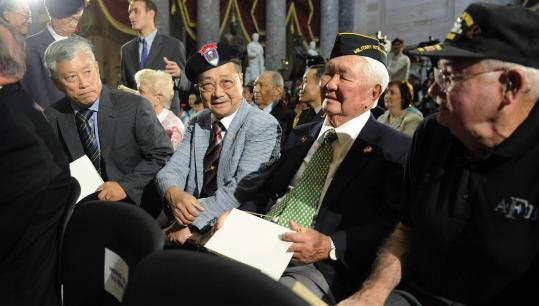 WASHINGTON — President Obama declared yesterday that he and President Dmitry Medvedev of Russia have “succeeded in resetting’’ the relationship between the former Cold War adversaries that had dipped to a dangerous low in recent years.

Obama directly acknowledged differences in some areas, such as Moscow’s tensions with neighboring Georgia, but said “we addressed those differences candidly.’’ And he announced that the United States and Russia had agreed to expand cooperation on intelligence and the counterterror fight and worked on strengthening economic ties between the nations.

Obama gave Russia perhaps the biggest gift it could have wanted from the meetings: an unqualified, hearty plug for Moscow’s ascension to the World Trade Organization. Russia has long wanted membership but US support in the past has come with conditions.

“Russia belongs in the WTO,’’ Obama said as the two leaders stood side-by-side in the East Room after several hours of meetings — including an impromptu trip to a burger joint for lunch.

The leaders faced questions about the US-led Afghanistan war, and Obama promised that the United States will “not miss a beat’’ because of the change in military command that he ordered on Wednesday. Obama accepted General Stanley McChrystal’s resignation and replaced him with his direct boss, General David Petraeus.

Petraeus “understands the strategy because he helped shape it,’’ Obama said.

Medvedev seemed reluctant to wade into the topic, recalling the ultimately disastrous Soviet invasion of Afghanistan in 1979.

“I try not to give pieces of advice that cannot be fulfilled,’’ Medvedev said. “This is a very hard topic, a very difficult one.’’

He said that Russia supports the US effort if it can result in Afghanistan emerging from extreme poverty and dysfunction to have “an effective state and a modern economy.’’

“This is the path to guarantee that the gravest scenarios of the last time will not repeat,’’ he said.

The ABA “has returned its highest rating of unanimously well qualified,’’ said Senate Judiciary Committee Chairman Patrick Leahy in a statement. The rating “is further evidence of Elena Kagan’s qualifications to serve as an independent justice,’’ the Vermont Democrat said.

The ABA, a group of 400,000 legal professionals, regularly provides ratings for nominees to the federal bench.

Leahy announced that Kagan will be introduced at the hearings by both of Massachusetts’s senators, Republican Scott Brown and Democrat John Kerry. Kagan is a former dean of Harvard Law School.

While Brown has not endorsed her, he praised her after the two met in his office after Obama nominated her.

Congress OK’s sanctions, sending message to Iran
WASHINGTON — Congress has overwhelmingly approved tough new sanctions against Iran, telling Tehran that its suspected pursuit of a nuclear weapons capability will not come without an economic price.

The Senate and House acted in quick succession yesterday to agree to the penalties targeting Iran’s Revolutionary Guard and the nation’s imports of gas and other refined energy products.

President Obama is expected to sign the bill soon.

The congressional action comes after a year in which the diplomatic efforts by the Obama administration to persuade Iran to change its nuclear policies have made little headway. It also comes two weeks after the United Nations approved a new round of sanctions against Iran.

Senator John McCain, Republican of Arizona, said the legislation, coming after a year in which the Obama administration’s direct diplomacy efforts were largely rebuffed by Iran, represents “the most powerful sanctions ever imposed by the Congress on the government of Iran.’’

One provision added in final House-Senate negotiations specifies that foreign banks interacting with the Revolutionary Guard or certain Iranian banks will be shut out of the US financial system. That measure has “the potential to be a game changer’’ in Iran’s defiance, said the House Foreign Affairs Committee chairman, Howard Berman, Democrat of California.

The European Union is considering its own penalties and last week the Treasury added three dozen more companies and individuals to those blacklisted because they contribute to Iran’s nuclear program or help Iran evade sanctions.

Democrats trumpeted the measure as a move to bring fuller disclosure to the world of shadowy campaign ads and Republicans attacked it as an unconstitutional restriction on free speech.

Passage sent the measure to the Senate, where majority leader Harry Reid has pledged to seek its approval despite strong Republican opposition that makes its prospects uncertain.

Organizations as diverse as the American Civil Liberties Union and Sierra Club on the left to the Chamber of Commerce and the National Right to Life Committee on the right opposed the measure. The NRA was officially neutral — and drew a jab from House Republican leader John Boehner of Ohio because of that.