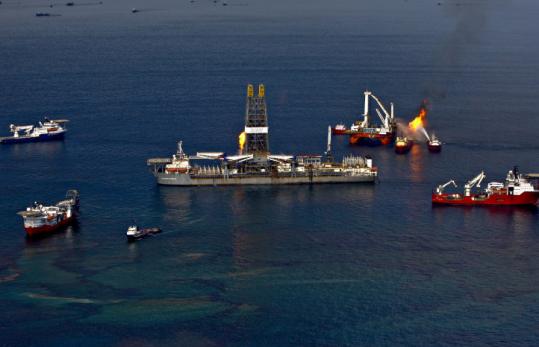 Drilling ships burned off gas and oil collected above the site of the oil leak recently in the Gulf of Mexico. (Derick E. Hingle/Bloomberg News)
By Charlie Savage New York Times / June 23, 2010

WASHINGTON — A federal judge in New Orleans blocked a six-month moratorium yesterday on deep-water drilling projects that the Obama administration imposed after the massive oil spill in the Gulf of Mexico. Interior Secretary Ken Salazar vowed to issue a new order.

In a 22-page opinion, US District Court Judge Martin L.C. Feldman issued a preliminary injunction against the enforcement of an order late last month halting all offshore exploratory drilling in more than 500 feet of water. Citing potential economic harm to businesses and workers, Feldman wrote that the Obama administration had failed to justify the need for such “a blanket, generic, indeed punitive, moratorium’’ on deep-water oil and gas drilling.

“The blanket moratorium, with no parameters, seems to assume that because one rig failed and although no one yet fully knows why, all companies and rigs drilling new wells over 500 feet also universally present an imminent danger,’’ wrote Feldman, a 1983 appointee of President Reagan.

Salazar responded in a statement that he will issue a new order in the coming days that will contain information making clear why the six-month drilling pause is necessary, the Associated Press reported.

The administration’s original order halted 33 exploratory drilling projects and suspended new permits but did not affect platforms already in production.

Robert Gibbs, the White House press secretary, said the administration “will immediately appeal’’ the judge’s ruling to a federal appeals court in New Orleans. He said it made sense to suspend exploratory deep-water drilling until the completion of the investigation into the April 20 explosion at the Deepwater Horizon rig leased by and the still-flowing leak from the underwater well.

President Obama “strongly believes,’’ Gibbs said, “that continuing to drill at these depths without knowing what happened does not make any sense’’ and would jeopardize “the safety of those on the rigs and safety of the environment in the gulf.’’

The immediate impact of the ruling on deep-water exploratory drilling was not clear. A White House official said the administration would probably seek a stay pending its appeal. And the decision left room for the government to assemble a stronger record in support of suspending such operations.

The ruling is the result of a lawsuit filed this month by a coalition of businesses that provide services and equipment to offshore drilling platforms. The coalition asked the judge to block the moratorium, contending that there was no evidence that existing projects were unsafe. The State of Louisiana filed a brief supporting the lawsuit, arguing that the suspension would cause irrevocable harm to its economy.

Feldman agreed, noting that “oil and gas production is quite simply elemental to gulf communities.’’

“The effect on employment, jobs, loss of domestic energy supplies caused by the moratorium as the plaintiffs [and other suppliers, and the rigs themselves] lose business, and the movement of the rigs to other sites around the world will clearly ripple throughout the economy in this region,’’ he wrote.

Representative Edward J. Markey, Democrat of Massachusetts, pointed out that the moratorium did not apply to the vast majority of rigs because they were already in production.

“This is another bad decision in a disaster riddled with bad decisions by the oil industry,’’ Markey said.

“The only thing worse than one oil spill disaster in the Gulf of Mexico would be two oil spill disasters. This judge’s decision flies in the face of mounting evidence that there are serious safety risks that must be examined."