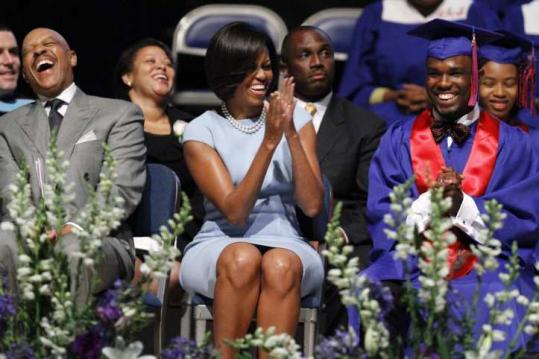 WASHINGTON — Her voice cracking and eyes filled with tears, Michelle Obama yesterday remembered her parents’ sacrifices for their two children and how they pushed for success as she urged high school graduates to claim their destiny.

Obama addressed students, parents, and faculty of The Academies at Anacostia at the school’s graduation ceremony at the Daughters of the American Revolution Constitution Hall, not far from the White House. She said she would not have been standing at the podium if her parents had not encouraged her and her brother, Craig Robinson, to have big dreams.

“I remember my mom pushing me and my brother to do things she’d never done herself; things she’d been afraid to do herself,’’ the first lady said. “What I can remember is my father getting up every day and going to work at the water filtration plant, even after he was diagnosed with MS, even after it got hard for him to button his shirt, and to get up and walk. See, I remember my parents sacrificing for us, pouring everything they had into us, being there for us, encouraging us to reach for a life they never knew.’’

Michelle Obama’s father, Fraser, is deceased. Her mother, Marian Robinson, lives at the White House with the first family.

She also encouraged the graduates to give themselves a pat on the back.

“You have to understand that there are a lot of people out there who believe in you. I believe in you. The president of the United States believes in you,’’ said Obama, who spoke for about 25 minutes. “When times are hard for us, you inspire us. You keep us going. We are expecting big things from you in the years to come. Big things.’’

Obama urged students to surround themselves with the right friends, travel abroad, and to continue to pursue higher education.

“You don’t have to be on a college campus to educate yourself,’’ she said. “There are opportunities all over D.C. to enrich your lives and enrich your minds.’’

It was Obama’s second address to Anacostia students. She visited the school during the last academic year to mentor female students.

The school is in one of the poorest sections of Washington and has struggled in the past, leading to its transfer to a chart school operator.

According to the graduation program, more than 90 percent of the graduates have received college acceptance letters.

New media advisers aim for Brown repeat in Nevada
LOS ANGELES — Some of the new media specialists who worked their magic for Massachusetts Senator Scott Brown have teamed up with the Nevada Republican who wants to take down the Senate majority leader, Harry Reid.

Reid intends to raise $25 million to defend his seat, but Angle’s campaign hopes the company’s expertise in online fund-raising will help her close that gap.

According to the company, Brown raised $12 million online in his upset victory over Democrat Martha Coakley for the seat held by Edward M. Kennedy.

The former Nevada legislator and favorite of the Tea Party movement has relied on a small circle of advisers that include her husband, Ted, and spokesman Jerry Stacy, but she is rapidly expanding her campaign team.

The Republican National Committee has said it will help finance her effort against Reid, whose campaign has depicted Angle as too conservative for mainstream Nevadans.

PORTLAND, Maine — Maine Republicans’ large field of candidates in their gubernatorial primary was one of several factors behind the largest GOP primary turnout since 1952.

The 130,928 Republican votes counted in unofficial tallies falls about 5,000 votes shy of the 1952 benchmark set when Burton Cross bested a three-person field.

Observers say the field of seven candidates and a tax overhaul referendum drew Republicans. They also say winner Paul LePage, a favorite of the Tea Party movement, turned out a big vote.

Dan Billings, a Republican political consultant, told the Portland Press Herald that LePage drew many people to the polls who wouldn’t normally vote in a primary.