National Cathedral finds itself in a bind

Economic woes may prompt sale of its rare books 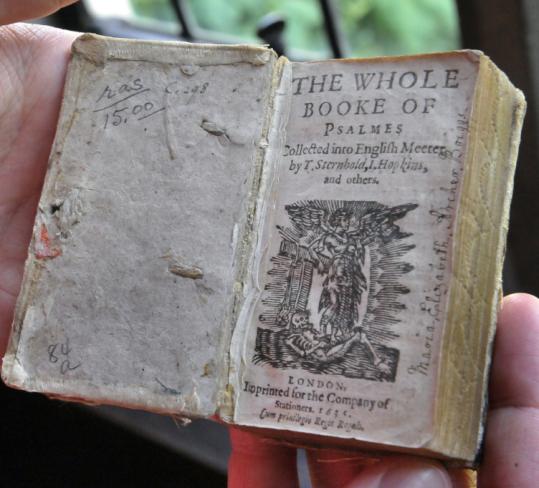 Hard economic times may force the Washington National Cathedral to sell off part of its rare books collection worth millions, including this book of psalms dating back to 1635. (Mark Gail/ Washington Post)
By Annie Gowen Washington Post / June 11, 2010

WASHINGTON — Over the past two years, economic hard times have loomed as large at Washington National Cathedral as the Gothic spires that grace the city’s skyline.

The cathedral has slashed its budget from $27 to $13 million, outsourcing its gift shop operation and shuttering its popular greenhouse and its continuing education college for clergy. Three rounds of layoffs have reduced the staff from 170 to 70, including, at the end of June, the cathedral’s conservator and the liturgist who oversaw the April memorial service for civil rights pioneer Dorothy Height.

Then news came last week that the cathedral, visited by every US president since Theodore Roosevelt laid its foundation stone in 1907, was considering selling off part of its rare books collection, probably worth millions.

Cathedral officials said the potential sale of the books is a separate matter from its ongoing budget difficulties. But they acknowledge that they no longer have the staff and resources to care for such a vast collection, which includes volumes donated by Queen Elizabeth II and Ethiopian emperor Haile Selassie and a Dutch Bible that was the first written in modern language.

The officials are in discussions with the Folger Shakespeare Library, which, with its internationally known conservation department, could possibly better preserve the fragile pages and make the tomes available to scholars.

The cathedral’s chief operating officer, Kathleen Cox, said the possible book sale, as well as measures such as eliminating financial support of a global poverty program, is an attempt to refocus on the cathedral’s core mission as a “church for the nation’’ and a tourist attraction.

Nearly 400,000 visitors a year take in the massive building’s stained glass, carved gargoyles, and a central tower that soars 30 stories, its top the highest point in the District of Columbia. President Woodrow Wilson is interred there, and the cathedral has hosted the funerals of three other presidents: Ronald Reagan, Gerald R. Ford, and Dwight D. Eisenhower.

“We are and should be a church for the nation, a symbol of the role of faith in our country,’’ Cox said.

She said she expects the cathedral, which does not receive any federal or Episcopal Church funding, to end the fiscal year June 30 with a balanced budget, thanks to the deep cuts, $11 million in fund-raising that is running ahead of projections, and a 5 percent draw into its $50 million endowment fund.

“This year has been really solid,’’ Cox said. “With the right staff and prudent changes, we have done well.’’

Even so, the cathedral’s dean, the Very Rev. Samuel Lloyd, sent out an anxious fund-raising appeal this month, asking for $500,000 by June 30 to forestall further cuts and repair winter storm damage. Despite the letter, cathedral officials said they think no further cuts will be necessary.

Cox said the cathedral needs to do a “better job of telling our story,’’ especially to the younger members of its growing congregation of 800, who could be potential future supporters. The average age of cathedral donors is 71, according to one estimate.

The cathedral’s struggles mirror those going on in many congregations, said the Rev. Stuart Kenworthy, rector of Christ Church, Georgetown.

“What they’re experiencing at the cathedral is what is happening in most Episcopal churches across this country,’’ he said. “The economic downturn ripples from the very top to the smallest parishes.’’ But supporters said they worry that the cuts might affect the cathedral’s ability to carry off high-profile events smoothly, as well as maintain its expansive grounds and lofty building of carved Indiana limestone and jewel-toned stained glass.

“It’s surprising the extent of it. Two or three waves of cutbacks? That’s concerning,’’ said a retired Pennsylvania bishop, Allen Bartlett, who served as assisting bishop at the cathedral from 2001 to 2004.

The cathedral, which has not had a rare books librarian since the 1970s, has been talking with the Folger over the past year about a possible sale or donation of about 2,000 of its 8,000 books, mostly rare Bibles, Books of Common Prayer, and theological works. Nothing has been finalized, Cox said.

The cathedral also owns valuable artwork, such as a Gilbert Stuart portrait of George Washington, which is in storage.

The gem of its book collection is the Prince Henry Bible, one of the original King James Bibles printed in 1611, which the king gave to his son, the prince of Wales. A similar book was sold at Sotheby’s in 1999 for $340,000.

That Bible, cathedral officials said they hope, will remain. Letting Prince Henry go would be too much.