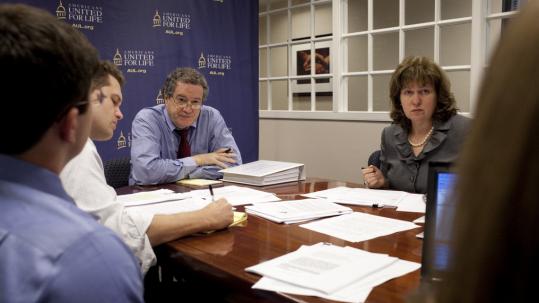 WASHINGTON — Two blocks from the White House, in the “war room’’ at the headquarters of the antiabortion group Americans United for Life, lawyers huddled yesterday around a box of frosted doughnuts as they refined plans to bring down a Supreme Court nominee.

A whiteboard listed names of senators to lobby for “no’’ votes on the confirmation vote on former Harvard Law School dean Elena Kagan, and the group’s researchers offered new angles to impeach her record.

The battle comes even as Kagan’s nomination seems increasingly assured. But in a Supreme Court fight, winning isn’t everything. It is also a high-profile opportunity to raise morale — and money — among political supporters, all in the name of supporting or opposing the nominee.

“We MUST raise $360,000 by June 30 in order to continue the momentum of our life-saving work!’’ the group’s president, Charmaine Yoest, wrote to her followers. Activist groups of all persuasions are using similar appeals.

“Kagan is a safe bet to be confirmed,’’ said conservative writer Ed Whelan, a former law clerk to Supreme Court Justice Antonin Scalia, “but it’s still important that conservatives use the opportunity to educate the public about the proper role of the court.’’

The unusual access to the inside workings of a major conservative group revealed an urgent atmosphere that belied the idea that Kagan will easily ascend to the highest court. Clarke Forsythe, the group’s senior counsel, implored the gathering by conference call to develop a narrative against Kagan.

“What’s the transcending issue that will pique the interest of a national audience?’’ he asked.

The lawyers struggled to stitch attack lines against Kagan into a cohesive thread. One idea was to paint “activism’’ as a power grab by the courts.

“We have to work on that messaging.’’

Having never been a judge, Kagan lacks a record of judicial decisions for critics to dissect. But Yoest held a meeting yesterday with Senator Orrin Hatch, Republican of Utah, in which she emphasized that Kagan has an extensive paper trail for review, much of it from Kagan’s time as a lawyer in the Clinton administration.

Activists groups on all sides seize such nomination battles as an opportunity to fortify their budgets and recruit more supporters, said Russell Wheeler, who studies the selection of judges and is a visiting fellow at the Brookings Institution, a Washington think tank.

“This is an appeal to their bases, to keep them energized,’’ Wheeler said. An energized base provides more donations, as well as volunteers to do the grunt work of knocking on doors and turning out voters on election day. Energized partisans are also more likely to vote in upcoming midterm elections, in which motivated turnout is a key factor.

The anti-Kagan strategists rely on a host of motivated investigators, who mine her record for nuggets that can be spun into attack lines or tough questions passed along to friendly senators when Kagan sits for her confirmation hearing. By investigating Kagan’s record, conservative groups serve as an unofficial research arm for Republicans on the Judiciary Committee.

“Anything that we find — and the other groups do this as well — we try to share it with the committee,’’ said Tom McClusky, senior vice president of the legislative arm for another conservative group, the Family Research Council. “Being in the minority, they have a lot less research staff, and they’re getting 50,000 documents a day. I would assume they appreciate the help. If not, they get it anyway.’’

McClusky said his group expects to invest $100,000 to $150,000 in a Web and print campaign that highlights Kagan’s opposition to the don’t-ask, don’t-tell policy that forbids openly gay armed service members.

When Kagan was dean of Harvard Law School, she restricted the access military recruiters had to students because the ban on openly gay service members violated the school’s policy against employers that discriminate. Recruiters were still allowed on campus through a student veterans group.

The policy has led to attacks on Kagan by some critics, but after meeting with Kagan last month, Senator Scott Brown, a Massachusetts Republican, dismissed the suggestion that Kagan held any antimilitary bias.

The regular war room meetings at Americans United for Life have produced a consistent critique of Kagan’s background. The group has issued daily statements blasting Kagan’s record since she was nominated on May 10, Saunders said.

Yesterday, the group discussed the first cut of its anti-Kagan Web video, which focuses on a little-known event at Harvard Law School at which Kagan strongly praised Aharon Barak, former president of the Supreme Court of Israel. The group considers Barak to be a liberal judge, and they want Republican senators to ask Kagan about the judges she would emulate, and pressure her about holding an activist philosophy.

While making a connection between an Israeli judge and Kagan seems far afield, Saunders said, the group needs to use every clue into Kagan’s judicial philosophy, given the lack of a direct judicial record.

“We’re doing investigative research,’’ Saunders said, “so it’s not like she has said X so much as you draw the conclusion when you put the pieces together.’’

Other groups are also busy with anti-Kagan videos. Curt Levey, director of the conservative Committee for Justice, said his group is producing anti-Kagan TV ads, likely to air shortly before the final confirmation vote.

“How much we can air them, of course, depends on how much money we can raise,’’ Levey said. His group spent about $15,000 last year opposing Supreme Court nominee Sonia Sotomayor. Fund-raising currently is ahead of last year’s pace, he said.

Levey hopes to target the ads at Democratic senators in conservative states, such as Ben Nelson of Nebraska and Jon Tester of Montana. In states without expensive media markets, a small investment can have a large impact, he said.

Pressure on Democrats in conservative states will be strong, predicted Gary Marx, director of the conservative Judicial Crisis Network, which is spreading its research into Kagan’s record through new social media and by traditional radio interviews and phone banks.

Back in the war room, Saunders seemed pleased about the potential impact of the group’s anti-Kagan video.

“The thing we need to do,’’ he reminded his troops, “is to get her to talk about this under oath and before the cameras.’’