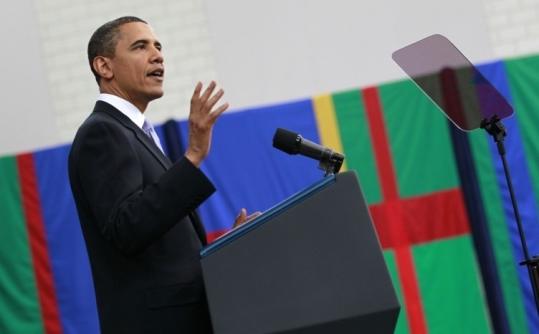 PITTSBURGH — Signaling that the Gulf of Mexico oil disaster has propelled climate change legislation toward the top of his priority list, President Obama called on Congress yesterday to roll back billions of dollars in tax breaks for oil companies and help the nation end its dependence on fossil fuels.

Obama predicted he would find the political support for legislation that could dramatically alter the way Americans fuel their homes and cars, including by placing a price on carbon pollution. A bill crafted by Senator John F. Kerry to do just that remains mired in the Senate.

“Pittsburgh, I want you to know, the votes may not be there right now, but I intend to find them in the coming months,’’ Obama told an audience at Carnegie Mellon University. “I will make the case for a clean energy future wherever I can, and I will work with anyone to get this done, and we will get it done.

“The next generation will not be held hostage to energy sources from the last century.’’

It was the fourth time in 12 days that Obama urged the Senate to take up the energy and climate change bill. The call to action was hailed by Kerry, a Democrat of Massachusetts, and Senator Joseph Lieberman, independent of Connecticut, who together filed the legislation last month.

“President Obama is clearly putting his shoulder to the wheel to pass comprehensive climate and energy legislation this year,’’ Kerry and Lieberman said in a joint statement. “Nothing could be more definitive than his explicit commitment today to find the remaining votes needed to pass this vital legislation.’’

Their legislation has faced several hurdles, including a lack of Republican support and a busy calendar before Congress leaves for its summer recess in two months. Senate majority leader Harry Reid, Democrat of Nevada, is expected to decide soon on whether to bring the legislation to the floor this year or push for a smaller package. He has also pledged to take up an immigration overhaul this year, but the president’s speech yesterday indicated he believes addressing climate change and energy policy is more important.

While critics have suggested that the oil leak has only added to the political uncertainty of passing the Senate legislation this year, Kerry has argued that the disaster bolsters the case that alternative sources of energy must be promoted. Obama also made that argument.

“Without a major change in our energy policy, our dependence on oil means that we will continue to send billions of dollars of our hard-earned wealth to other countries every month — including countries in dangerous and unstable regions,’’ Obama said. “In other words, our continued dependence on fossil fuels will jeopardize our national security. It will smother our planet. And it will continue to put our economy and our environment at risk.’’

The president spoke as Americans remain deeply frustrated by the worst oil spill in the nation’s history, which is still spewing crude in the Gulf of Mexico more than a month after a drilling rig sank. He sought anew to connect to that public angst while promising that “we’re waging this battle every minute of every day’’ to plug the gushing deep-water well.

The proposal to roll back company tax breaks is included in the president’s most recent budget proposal. Now with the spill casting big oil in a bad light, calling for the elimination of such subsidies is one more way for Obama to show the public he wants to hold the industry accountable.

“The time has come, once and for all, for this nation to fully embrace a clean energy future,’’ the president said.

Among the tax cuts targeted is a $17.3 billion credit over 10 years for oil and natural gas producers approved in 2004, said Kevin Book, a managing director at ClearView Energy Partners LLC, a Washington-based policy analysis firm. Obama may also seek to rescind a credit on how companies account for certain drilling costs, worth $7.8 billion over a decade.

“This is not a surprise,’’ Book said. “They have advertised that this is one of the main plays in their playbook.’’

Globe staff writer Matt Viser contributed to this report. Material from the Associated Press and Bloomberg News was also used.