Some believe moderates may turn to Democrats

WASHINGTON — The Tea Party movement is energizing elements of the Republican Party and fanning an anti-Washington fervor, but the biggest beneficiaries in the midterm elections, pollsters and political analysts say, could be the main target of their anger: Democrats.

From North Carolina and Kentucky to Colorado and Nevada, candidates backed by Tea Party activists are making strong showings in primaries and opinion polls. Some of their campaigns, however, threaten to undercut GOP efforts to attract independents and moderates, prized voting factions in the general election.

The anti-establishment candidates and their supporters insist they are simply voicing a widespread frustration with big government and big spending in Washington. Far from alienating Americans, Tea Party contenders will encourage conservatives to go to the polls in the midterm general election, when turnout is typically lower than in presidential elections, their supporters say.

Nor is the GOP establishment ready to put a damper on the movement, which already has helped nominate libertarian-leaning Rand Paul in the Kentucky GOP primary for US Senate and tossed out veteran Senator Bob Bennett in Utah’s GOP primary.

“These are Americans who are concerned about the government and spending and debt, so we ought to be able to find a way to be responsive to them,’’ said Senator John Cornyn, chairman of the National Republican Senatorial Committee. “I don’t consider them outliers or unwelcome.’’

Democrats fully expect to lose seats this fall, in part because of historical trends and in part because of a voter backlash against the Democrat-controlled government in Washington. And the majority party is experiencing infighting as well; incumbent Arkansas Senator Blanche Lincoln, for example, has been forced into a runoff against Bill Halter, the lieutenant governor whose candidacy has been backed by more liberal Democrats.

But Republicans are in a more vexing quandary, trying to channel the energy of the Tea Party movement while keeping its more controversial leaders from becoming the face of the GOP. Capitol Hill Republicans, for example, have distanced themselves from Paul’s comments to MSNBC’s Rachel Maddow that he would have sought to change in the 1964 Civil Rights Act one provision outlawing discrimination in certain businesses. Paul later said he would have voted for the act.

Republicans, however, are careful not to alienate the movement’s rank and file.

“Tea Party people are people who are very concerned about the financial future of our country, and they certainly play a role,’’ said Massachusetts GOP Senator Scott Brown, whose surprise victory in January was partly propelled by support from Tea Party and conservative activists. Brown added that he had not had time to listen to the comments made by Paul or other Tea Party-backed candidates.

Democrats, however, see opportunity where Tea Party candidates have thrived. Even if Paul wins the Kentucky Senate seat against Democrat Jack Conway, his comments on civil rights are likely to energize African-American voters, who could deprive Republicans of picking up one or more House seats in the Bluegrass State, said University of Kentucky political science professor Stephen Voss.

Senator Robert Menendez of New Jersey, chairman of the Democratic Senatorial Campaign Committee, believes Democrats could pick up a seat in Kentucky — and prevent the GOP from ousting Democrats in Nevada and Colorado if Republican voters support Tea Party candidates there as well. “The mainstream is losing out to the extreme,’’ he said of the Republican primaries.

The stakes are perhaps no higher than in Nevada, where early voting in the June 8 primary has started.

In the race to pick someone to take on a Democratic kingpin, embattled Senate majority leader Harry Reid, Tea Party-backed contender Sharron Angle has erased the lead of early front-runner Sue Lowden, a former state legislator. A win by Angle — a staunch conservative who believes the Department of Education is unconstitutional and who wants to phase out Social Security — could bolster the prospects of Reid.

To capture the GOP’s biggest trophy this fall, “you’ve got to be able to appeal to the independents, the moderate Republicans and moderate Democrats who are frustrated with Harry Reid,’’ said Maurice Washington, a Republican Nevada state senator who believes Lowden is the stronger candidate.

In Colorado, another target state for Republicans, Tea Party-approved candidate Ken Buck has surged in the polls and is nearly tied with Jane Norton, who was recruited by Cornyn’s committee to run for the US Senate. But Buck is still a weaker potential candidate against either Democrat running, according to an average of polls by Pollster.com.

While Norton is a point ahead of Democratic incumbent Senator Michael Bennet in the poll averages, Bennet is running ahead of Buck by more than two points — and trends show Bennet is gaining in that potential face-off.

The race for a congressional seat in North Carolina has the GOP establishment alternately attacking and trying to marginalize the Tea Party candidate, Tim D’Annunzio.

Earlier this month, primary voters favored D’Annunzio, who has on his blog acknowledged using drugs and getting arrested, according to several news reports. His ex-wife, according to local newspaper examinations of his divorce papers, said he once claimed to have discovered the Ark of the Covenant. He won the most votes in the primary but faces a runoff on June 22 with second-place candidate Harold Johnson.

The chairman of the Republican Party in North Carolina, Tom Fetzer, has called D’Annunzio “unfit’’ to hold any office; D’Annunzio’s campaign spokeswoman, Lauren Slepian, dismissed several of the complaints against him as the rhetoric of a nasty divorce.

Even high-profile successes can have unintended consequences. Marco Rubio, one of the galvanizing figures of the Tea Party movement, has been so successful in his campaign to represent Florida in the Senate that the previous front-runner, Governor Charlie Crist, dropped out of the GOP primary and is running as an independent.

The result, political analysts say, buoys the chances of onetime longshot candidate Kendrick Meek, a Democratic representative, since Crist and Rubio would be likely to split the GOP vote. And if Crist wins the seat, which had been held by Republican Mel Martinez, he could be a swing vote on certain issues with Democrats.

Tea Party defenders, however, call their candidates victims of both parties — Democrats seeking to taint GOP slates across the country with unfair caricatures and Republicans irritated that their hand-picked candidates aren’t connecting with voters.

Angle is “the most vocal and consistent and authentic economic conservative in this race. That is going to be the message that resonates in the general election,’’ said Michael Connolly of the Club for Growth, an antitax group that is running a TV ad for Angle. 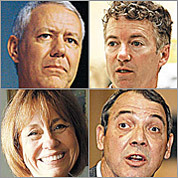