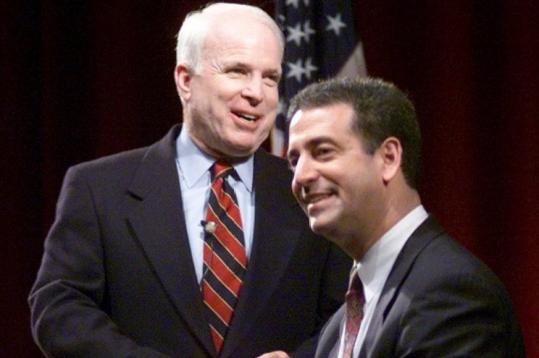 WASHINGTON — Nervous lawmakers anticipating an unstoppable flood of corporate and union money into the fall political campaigns have found one way to fight back: by loosening the rules for the major political parties, allowing them to exert more influence of their own.

Little-noticed language in campaign finance bills would help parties and their candidates get around restrictions on working together on political campaigns — essentially allowing parties to tap into their deep well of funds to more directly help their favored candidates.

Another provision would require broadcasters to offer political parties the same low advertising rates they give to candidates.

The measures are part of a package of changes introduced in Congress after the Supreme Court’s rejection in January of longstanding restraints on direct corporate and union spending.

The US Chamber of Commerce has said it is preparing to spend $50 million on midterm elections, an early sign of a corporate media blitz to come.

Powerful unions are also planning massive spending on the fall campaigns. Officials from the American Federation of State, County and Municipal Employees have told The Hill newspaper that the union plans to top $50 million in spending, while the Service Employees International Union reportedly plans to spend $44 million.

At issue in the congressional debates is who will be able to wield the greatest financial might in American elections.

The effort to strengthen the power of political parties would “address the disproportionate influence’’ the Supreme Court gave to big corporations by striking down broadcast regulations in the 2002 McCain-Feingold campaign reform bill, said US Representative Chris Van Hollen, a Democrat from Maryland and chairman of the Democratic Congressional Campaign Committee.

But even as lawmakers try to counter the effects of the Supreme Court’s ruling, the voice of the average citizen is already shrinking, said Sarah Dufendach, vice president of legislative affairs for the watchdog group Common Cause.

“Regular-old Joe Six-pack has been drowned out for a long time,’’ she said. “The court made a bad system intolerable.’’

Eight years ago, advocates of campaign finance reform celebrated the McCain-Feingold law, named for its Senate sponsors, Republican John McCain and Democrat Russ Feingold, as their biggest victory in a generation. But in three key decisions since 2007, the Supreme Court has eliminated restrictions or opened what advocates consider loopholes.

More reversals may be in store. A host of lawsuits pending in the federal courts threaten to further erode campaign spending restrictions.

“There has been an explosion of cases challenging campaign finance laws,’’ said Tara Malloy, associate counsel at the Campaign Legal Center, a nonpartisan campaign watchdog. “Probably because people can smell blood in the water.’’

The trend is being led by opponents of restrictions on campaign spending, such as James Bopp Jr., an Indiana lawyer and member of the Republican National Committee.

“The First Amendment says, ‘Congress shall make no law’ ’’ abridging free speech, said Bopp. “McCain-Feingold was 90 pages long and spawned a thousand pages of regulation. How much further can you get from ‘make no law?’ ’’

Bopp was a legal adviser to Citizens United, a conservative nonprofit group, during its lawsuit against the Federal Election Commission, which resulted in the Supreme Court’s decision in January striking down McCain-Feingold restrictions on broadcast advertising. The ruling freed corporations and labor unions to spend unlimited sums on campaign ads.

President Obama has warned that the Citizens United ruling would give “a green light to a new stampede of special interest money in our politics.’’

So far, the effects of Citizens United are hard to measure. Colby College professor Anthony Corrado, who studies campaign finance, doubts that large corporations will directly buy many political ads this fall. Many observers believe associations and groups such as the Chamber of Commerce will be used as surrogates.

“There was already a lot of corporate money being spent in elections,’’ Corrado said, much of it funneled through politically active trade organizations. “I don’t expect a flood of corporate advertising; they would rather stay one step back, one step removed.’’

Another potentially transformative campaign finance case brought by Bopp — Republican National Committee v. FEC — is expected to test the federal ban on so-called “soft money,’’ or donations made to political parties but not designated for particular candidates.

Corrado believes the RNC case could have even bigger implications than Citizens United.

“It could open up the door to have the corporations generating unregulated contributions, which I’m sure the parties would aggressively go out and seek,’’ he said.

A three judge panel for the US District Court for the District of Columbia upheld soft-money caps in March, and an appeal to the Supreme Court is pending. The court can affirm the lower court decision, or agree to hear the case.

As recently as 2003, the Supreme Court upheld most of the McCain-Feingold law. The only thing that has changed, said former US representative Martin Meehan, a Massachusetts Democrat who was a chief sponsor of the House version of McCain-Feingold, is the composition of the court.

Lawmakers responded to the Citizen’s United ruling with a bill that seeks to ensure that voters know who is spending millions of dollars to influence elections.

Van Hollen is the chief House sponsor of the bill, known as the Democracy Is Strengthened by Casting Light on Spending in Elections Act — or Disclose.

It proposes new financial disclosure requirements for corporations and unions that get involved in politics, and would ban campaign broadcast ads by foreign-controlled companies, government contractors and banks that still owe bailout money. Corporate leaders and union heads would have to appear in their ads to take responsibility.

Bradley Smith, chairman and cofounder of the Center for Competitive Politics, which works against campaign finance regulations, said the Disclose Act “would ban a great deal of political speech’’ and impose onerous reporting requirements that will turn off many small groups from the political process.