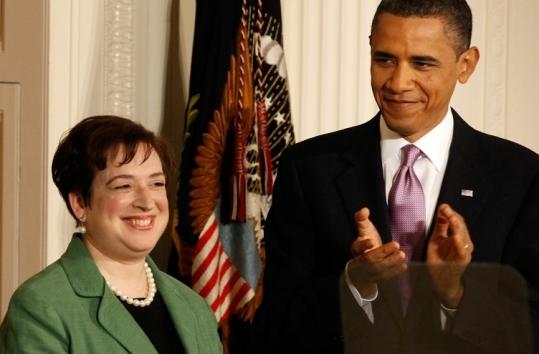 When President Obama announced his nomination of Elena Kagan, he praised her temperament, which mirrors his own. (Chip Somodevilla/ Getty Images)
By Susan Milligan Globe Staff / May 16, 2010

WASHINGTON — If Elena Kagan is confirmed as the next Supreme Court justice, President Obama will have something that has become increasingly rare for presidents: a personal friend on the court.

Indeed, when Obama introduced Kagan at the White House as his court nominee, it sounded almost as if he were talking about himself: a former Chicago law professor, Harvard graduate, and White Sox fan who eschewed the lucrative world of corporate law to focus on academia and public service.

Obama brought her into his administration by nominating her to be solicitor general and now, after slightly more than a year in that job, he wants to elevate her to the Supreme Court.

Obama and Kagan first met in the early 1990s in Chicago. While they are not close friends, they have maintained their relationship over the years through common outlooks on politics and law, according to those who know or closely watch them. The arc of their careers sent each to trailblazing heights: Kagan as the first woman to be dean of Harvard Law School and Obama as the first African-American in the White House.

Obama and Kagan “do seem to have similar takes on the court, a moderate-progressive view that the courts can play a useful, progressive role, but it needs to be constrained,’’ said Geoffrey R. Stone, professor and former dean of the University of Chicago Law School, who knew both Obama and Kagan when they taught in Chicago. “My guess is, if they were voting on cases as justices, they probably would be very similar.’’

Former University of Chicago law professor Albert Altschuler called both Obama and Kagan “lawyers’ lawyers.’’ Their approach is, “here’s a legal problem — let’s see if I can solve it,’’ said Altschuler, who taught with Kagan.

Many presidents of the past have nominated friends and associates to the high court. President Lincoln named his former campaign manager to the high court, and Andrew Jackson appointed several friends to the Supreme Court.

But the practice of nominating friends has been less common in recent years, according to Fred McClure, a Washington-based lawyer who shepherded three Reagan and Bush administration nominees through their confirmations. Then-President George W. Bush in 2005 tried to revive the practice by nominating his friend, White House counsel Harriet Miers — only to have her withdraw amid an uproar about her qualifications.

White House press secretary Robert Gibbs, dismissing suggestions by some conservatives that the pick of Kagan amounted to cronyism, said he has “a hard time understanding the analogy’’ between Miers and Kagan, citing Kagan’s time as dean at Harvard Law and solicitor general.

Whether Kagan would be an ally to the Obama administration is unclear, because justices have sometimes delivered legal opinions at odds with the political goals of the presidents who got them their jobs.

Retiring Supreme Court Justice John Paul Stevens was nominated by a moderate Republican, Gerald Ford, but wound up with a reputation for being one of the most liberal members of the court. Kagan has never served as a judge and has relatively few published academic writings, leaving observers across the political spectrum to speculate about her views.

As a result, Obama’s personal knowledge of Kagan may have been key to his decision to pick her. They met at the University of Chicago Law School and developed a professional friendship. Kagan was a professor, and Obama was a lecturer who was on campus about 10 hours a week, according to Stone.

In addition to Kagan’s relationship with Obama, she also has uncommonly close ties to both the president and his administration.

She went to law school at Harvard with Ron Klain, Vice President Joe Biden’s chief of staff. She was supervisory editor of the Harvard Law Review, which Obama later would himself edit.

She clerked for former federal Judge Albert Mikva — who would later offer a clerkship to Obama, who declined it. In the summer of 1993, she was special counsel to Biden, then a US senator from Delaware, on the Senate Judiciary Committee.

From 1995 to 1999 she was an associate counsel, and then domestic policy aide in the Clinton White House, where she came to know such Obama administration heavyweights as chief of staff Rahm Emanuel.

While Kagan was in the political world at the White House, Obama pursued a career in Illinois state politics, and eventually became a US senator and president. Obama named her solicitor general in 2009.

“It is unusual, the degree to which she has worked with, or otherwise known people who are in the administration right now,’’ said Pamela Harris, a visiting professor and executive director of the Supreme Court Institute at Georgetown Law Center.

“I’m not sure they would know that much more about her judicial philosophies,’’ because her previous jobs have not revealed that, Harris said, but “they must have a very good sense of how good she is at her job.’’

In introducing Kagan as his nominee Monday, Obama praised her temperament, which mirrors what has become known as the milieu of “no drama Obama.’’ And instead of choosing corporate law, “she chose a life of service — service to her students, service to her country, service to the law and to all those whose lives it shapes,’’ Obama said, again an unspoken reflection on his own career path.

Notwithstanding the parallels, Vermont Law School professor Cheryl Hanna said “Elena Kagan would have been on any Democrat’s short-list regardless of whether she knew [Obama] or not.’’