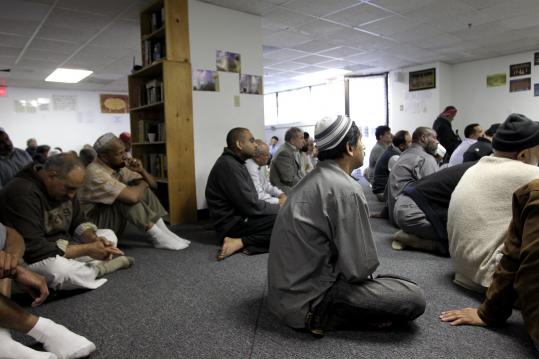 With federal investigators continuing to probe the attempted Times Square car bombing under a shroud of secrecy, friends and acquaintances of the three New England men arrested in the case provided a fuller picture of them yesterday.

A roommate of two Pakistani men detained in Greater Boston Thursday said he was stunned by their arrests and unaware of any links between them and the suspect in this month’s attempted attack.

“It was a shock for me; I never heard anything like this before,’’ Sayyed Jehan, 33, said at the Allston-Brighton Islamic Center, a mosque where he and one of the two roommates, Pir Khan, worshiped. “He’s a nice guy. From what I knew of him, there was nothing wrong with him.’’

Khan, a 43-year-old taxi driver who has lived with Jehan in Watertown for eight years, and Aftab Khan, a gas station employee in his 20s who moved in about six months ago, were taken into custody by federal authorities Thursday during a series of early morning raids across the Northeast.

Investigators are probing whether Pir and Aftab Khan — along with a third Pakistani man arrested in Maine, Mohammad Shafiq Rahman — had provided money to Faisal Shahzad, the man accused in the car bombing attempt. The three men have not been charged with any crime, but are being held on what authorities said were immigration violations.

Rahman, a 33-year-old computer programmer known as Shafiq to friends, worked for Artist & Craftsman Supply, a company with 15 stores from Portland, Maine, to Los Angeles, owner Larry Adlerstein said in a telephone interview. Only a few days ago, Adlerstein said, Rahman surprised him by volunteering that he knew Shahzad, a Pakistani-born former financial analyst from Bridgeport, Conn., through the Pakistani community in that state.

Rahman told his boss he had not seen Shahzad in eight or nine years but was surprised by Shahzad’s arrest in the attempted May 1 bombing, because the suspect was “very meek’’ when he knew him, Adlerstein said.

A handful of federal agents showed up at Adlerstein’s business in Portland around 9 a.m. Thursday and informed him that Rahman had been arrested. Adlerstein said he was upset because he likes Rahman and considers him a friend.

“He’s very gentle, very soft-spoken,’’ Adlerstein said of Rahman, who he said is married. “Everything we know about Shafiq was that he was a gentleman.’’

US Attorney General Eric Holder told reporters in Washington Thursday that authorities believe there is evidence that the three men taken into custody had provided money to Shahzad. But he said they were trying to determine whether the men knew they were supplying funds for what the Obama administration describes as an act of terrorism aided and directed by the Pakistani Taliban.

On Thursday, federal agents searched 39 Waverley Ave. in Watertown, where the Khans lived with Jehan in a first-floor apartment. They also searched for evidence and questioned witnesses at two Mobil stations in Brookline where Aftab Khan worked as an attendant. The Khans are distant relatives, according to an employee at one of the gas stations.

It is unclear when the three men taken into the custody of US Immigration and Customs Enforcement will appear in federal Immigration Court in Boston. Unlike criminal defendants, people detained for alleged immigration violations face administrative charges, and a veil of secrecy surrounds proceedings.

Kelly Nantel, a spokeswoman for Immigration and Customs Enforcement in Washington, declined to discuss any specifics about the three men yesterday or even to confirm their identity, saying the investigation is continuing and “the immigration process affords individuals privacy.’’

Another way immigration cases differ from criminal cases concerns the right to legal representation. In criminal cases, defendants have a constitutional right to a lawyer, and the government will appoint one if they cannot afford an attorney. In immigration cases, individuals taken into custody have no constitutional right to a lawyer if they cannot afford one, although some lawyers provide services free. It could not be determined whether the three men detained Thursday have hired lawyers.

Boston lawyer Norman S. Zalkind, who recently represented a Pakistani imam in Sharon who was convicted in federal court of lying to immigration authorities in a bid to obtain a green card, said the government uses immigration charges to wrest information in terrorism investigations.

“It’s used as a tool because there are less rights available to the defendants,’’ he said. “These people may be totally innocent of anything other than some immigration violations, but this is a very easy way for [investigators] to get information.’’

Jehan said he has lived with Pir Khan in different apartments in Watertown, most recently the one on Waverley Avenue. He said Khan was a hard-working cab driver who fixed automobiles to make extra money, loved to cook, and avidly followed the and the .

Jehan said Khan used to send money to a brother, Zabor, in Pakistan, but had no details.

The other roommate who was arrested, Aftab Khan, had moved into the Waverley Avenue apartment about six months ago, Jehan said. Aftab Khan worked at gas stations in Brookline, and Jehan said he did not know him well.

Several people attending Friday prayer services at the Allston-Brighton Islamic Center said they knew Pir by his nickname, Babu. They said he is a quiet man who often kept to himself.

“I just don’t believe the charges against him, but we’ll just have to wait,’’ said Rafek Yosafzai, president of the center.

Hassan Mohamed, an imam who preached at the services, told worshippers yesterday: “Islam means peace. Our concern is to do good deeds and to teach good children what to do, what not to do.’’

In Maine, Adlerstein said he was very concerned that Rahman was taken into custody. In the eight months Rahman has worked for him, he did excellent work developing a program that hooked up the business’s computers with those of vendors. He also socialized with co-workers and impressed Adlerstein with how many fish he caught at a retreat for managers on the Maryland shore in October.

“He fit right in,’’ Adlerstein said.

A few days ago, Adlerstein happened to mention all the news about the alleged bombing attempt by Shahzad in Times Square and concerns of terrorism.

“I said, ‘Shafiq, this must be hard for you, all this negative stuff going on about Pakistan,’ ’’ Adlerstein recalled. “He said, ‘Yes, it is hard.’ And he added as an aside, ‘I know the guy.’ ’’

Rahman told Adlerstein that when he saw him nearly a decade ago, Shahzad was a mild man who held no strong opinions. And then Rahman added, “Maybe that’s the personality type terrorists want to mold,’ ’’ according to Adlerstein.

The federal agents did not tell Adlerstein where Rahman was arrested and simply said they were investigating the computer programmer for allegedly being in the United States illegally, said Adlerstein. They seized at least one computer at the business that Rahman had used, he said.