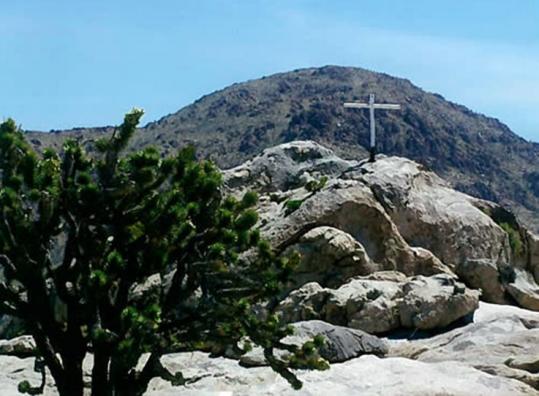 The cross, built of metal pipes, as it looked on an outcrop in California’s Mojave Desert before it was covered in plywood. (Henry And Wanda Sandoz/ Liberty Legal Institute)
By Robert Barnes Washington Post / April 29, 2010

WASHINGTON — The Supreme Court yesterday said a lower federal court was wrong to order the removal of a cross on government land in the middle of the Mojave Desert, and said separation of church and state “does not require eradication of all religious symbols in the public realm.’’

The case, which involved a white cross erected by veterans more than 75 years ago to honor the dead of World War I, splintered the court, 5 to 4. The court’s conservative members prevailed, but six of the nine justices wrote to explain their views.

It did not provide a clear rule for the future — or even explicitly say that the cross could remain in place. “To date, the court’s jurisprudence in this area has refrained from making sweeping pronouncements, and this case is ill suited for announcing categorical rules,’’ said Justice Anthony Kennedy.

But he wrote that the cross “is not merely a reaffirmation of Christian beliefs.’’

“Here,’’ he added, “one Latin cross in the desert evokes far more than religion. It evokes thousands of small crosses in foreign fields marking the graves of Americans who fell in battles, battles whose tragedies are compounded if the fallen are forgotten.’’

Kennedy wrote that Congress had probably corrected any problem with the cross being on public land by agreeing to swap a portion of the rock outcropping on which it stands to a veterans group, which has said it will maintain the site as a memorial.

A federal court in California, where the cross is located in the vast Mojave National Preserve, had said the land swap was an “illicit’’ way for the government to get around a ruling that the cross violated constitutional protections against government endorsement of religion.

The cross was originally erected at Sunrise Rock by a group of World War I veterans who used to gather at the spot for social gatherings. It has been replaced several times, most recently in 1998 by Henry Sandoz, who with his wife, Wanda, maintains the 6 1/2-foot metal cross.

It was challenged by a former park employee, who objected to a Christian symbol on public land. It was not taken down as a result of the lower court action, but covered with a plywood box.

Until the legal battle, Justice Samuel A. Alito Jr. wrote, “it is likely that the cross was seen by more rattlesnakes than humans.’’

“Although we’re disappointed by today’s decision, we’re encouraged that the case is not over,’’ said Peter Eliasberg, managing attorney for the American Civil Liberties Union of Southern California, who argued the case. “We will continue to argue that the land transfer did not remedy the violation of the Establishment Clause. . . . It is wrong for the government to make such a deliberate effort to maintain it as a national memorial.’’

Kelly Shackelford of Liberty Institute, which represented the Sandozes, said his group applauded the court. “But this battle is not over. This box must come off.’’