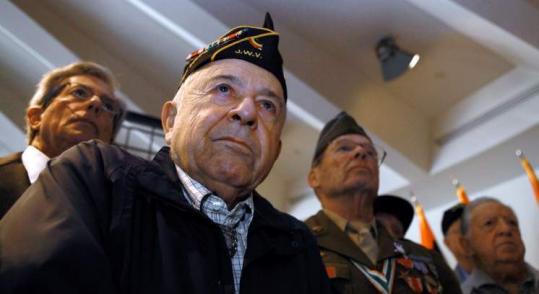 WASHINGTON — The 120 veterans wore red, white, and blue tags emblazoned with the word “LIBERATOR’’ and trudged along on walkers. Others could hardly hear as they toured the US Holocaust Memorial Museum on Wednesday. But the memories of the atrocities they witnessed in the waning months of World War II — when soldiers from several armored and infantry divisions liberated concentration camps throughout Germany and Austria — remained achingly clear.

Some attending what museum officials said is one of the largest gatherings of liberators ever held remembered that cremation ovens were still warm, ashes fuzzing the foul air. Stacks of bodies on railroad cars. How their hearts ached when commanding officers forbade them from passing along rations to the starving people, for fear the rich food would sicken them further.

Fletcher Thorne-Thomsen said he would never forget one emaciated man who was so happy to see the American he tried to hug him with fragile arms.

“I can still see a pair of eyes,’’ he said. The man’s look was penetrating. It has haunted him for 65 years.

Thorne-Thomsen, 87, is among the dwindling number of soldiers who helped liberate death camps in World War II and who traveled to Washington for this week’s National Days of Remembrance, which culminated in a ceremony in the US Capitol Rotunda yesterday. Museum officials said that given the advancing age of many of the men — most are in their late 80s or older — it could be one of the last gatherings of its kind.

“They have a story of enormous importance to share with new generations . . . and so we wanted for one last time to bring them all together,’’ said Sara Bloomfield, the director of the museum.

“We all have different stories to tell, but we all feel the same thing: How could a human being inflict such pain on another human being?’’ said Edward Ichiyama, a Japanese-American liberator from Hawaii who, because of his ancestry, wasn’t allowed to enlist in the Army until well into the war.

Ralph DiCecco, 85, of Seattle, said he and his fellow soldiers didn’t understand what they were fighting for until that fateful moment on April 29, 1945, when his division entered Dachau’s gate. In the days that followed, the young men retreated from the horrifying scene — with its stench and piles of human flesh — to bombed-out buildings in Munich to camp and to try to make sense of what happened.