School boards reconsider whether to keep funding many aging planetariums 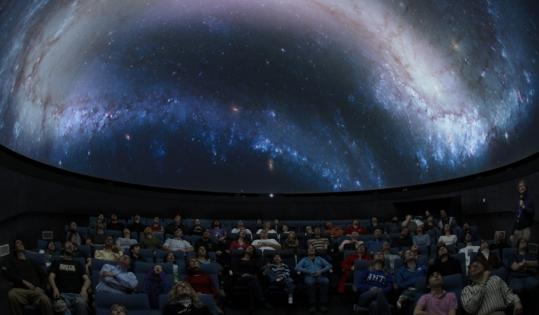 More than 500 planetariums were built in the heat of the space race, many of them with federal funding. Above, the planetarium at the McAuliffe-Shepard Discovery Center in Concord, N.H.
By Michael Alison Chandler Washington Post / April 8, 2010

WASHINGTON — The David M. Brown Planetarium opened a few months after the United States put a man on the moon. More than 40 years later, little has changed in the weathered white dome that marks the entrance to the Arlington County, Va., school system’s headquarters.

Students sit in the same faded electric blue stadium seats and stare up at a stellar showcase provided by 16 slide projectors, two laserdisc players, and the original Spitz A4 star projector.

School officials estimate that it would cost $500,000 to make the facility, named for an Arlington graduate killed in the 2003 Columbia space shuttle disaster, state of the art again. Instead, Superintendent Patrick Murphy has proposed closing the dome and converting it to standard classrooms.

His proposal follows a decision last year by the Fairfax County School Board to cut funding for elementary field trips to the nine planetariums there.

More than 500 planetariums were built in the heat of the space race, many of them additions to public schools made possible by US funding. Today, school boards across the country are debating whether the costs of maintaining or updating the aging domes are worth it for a generation of students shaped more by the Information Age than the Space Age.

“I think the planetarium was much more whiz-bang 40 years ago than it is today,’’ said Constance Skelton, science supervisor for Arlington schools.

Students today can see images of the solar system from their laptops and use virtual telescopes to explore space, Skelton said. And while the space race provided a captivating, teachable moment for yesterday’s budding scientists, newer issues such as climate change are likely to inspire tomorrow’s, she said.

But many scientists and planetarium directors reject the notion that the study of space, a field that dates to ancient civilizations, could lose its power to motivate.

They say planetarium technology does not need to be on par with “Avatar’’ to wow students and to teach them the landmarks and legends of the night sky. Children for generations have been fixated on outer space.

“There is always an oooh moment’’ when the lights go down and the stars go on, said Steve P. Brown, an astronomy teacher at W.T. Woodson High School in Fairfax who uses little more than his 47-year-old star projector, a laptop, and sometimes the “William Tell Overture’’ to introduce students to the solar system. Despite funding cuts this year, Brown still opens the Woodson planetarium to many elementary school groups who raise funds for field trips.

The number of planetariums nationwide has grown slightly in recent years to more than 800 fixed domes, according to the International Planetarium Society. The growth is attributable to a renaissance in technology, specifically digital video cameras that manufacturers say offer more of a “you are there’’ experience.

Inflatable planetariums are also on the market for a fraction of the cost. Every high school in Loudoun County, Va., has a portable “Starlab.’’

Many older planetariums have struggled financially since federal funding dried up three decades ago. Private planetariums attached to science centers or museums have resorted to creative ways to stay afloat or upgrade, opening their venues to movies, laser shows to the strains of Pink Floyd, or private events held “under the stars.’’

Planetariums in public schools are more vulnerable when the economy dips, said Jon Elvert, a planetarium director in Baton Rouge, La., and former president of the International Planetarium Society. “They are often considered a frill, a field trip,’’ he said.

It is up to the director to show that the planetarium offers more than a picture show. Successful directors work closely with other science teachers to connect lessons to the broader curriculum.

Some go beyond elementary solar system classes and offer star-studded complements to literature lessons on Greek mythology, history classes on the ancient Egyptians or Mayans, or space-inspired art projects.

Outside funding also plays an increasingly important role in keeping the stars bright. C.D. Hylton High School in Woodbridge, Va., received a $246,000 grant to update its planetarium, and the Howard B. Owens Science Center in Lanham, Md., is partnering with the Johns Hopkins University Applied Physics Laboratory to develop a program on a NASA mission to Pluto.

In Arlington, more than 300 people signed a petition to keep the Brown Planetarium open. One recent Friday, fifth-grade visitors from an elementary school seemed impressed even before their whirlwind lesson on extraterrestrial life, the end of the world, the different temperatures of stars, and what life on Earth would be like without a moon.

“It’s beautiful,’’ a student exclaimed, staring up at the dome illuminated by a sky-blue light.