FBI gives a glimpse of its most secret layer 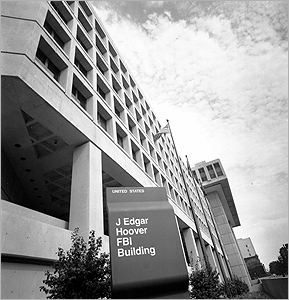 WASHINGTON — It is where the government has hidden the most secret information: plans to relocate Congress if Washington were attacked, dossiers on double agents, case files about high-profile mob figures and their politician friends, and a disturbing number of reports about the possible smuggling of atomic bombs into the United States.

It is also where the bureau stowed documents considered more embarrassing than classified, including its history of illegal spying on domestic political organizations and surveillance of nascent gay rights groups.

It is the FBI’s “special file room,’’ where for decades sensitive material has been stored separately from the bureau’s central filing system to restrict access severely and, in more sinis ter instances, some experts assert, prevent the Congress and the public from getting their hands on it.

Established in 1948 under the reign of notoriously secretive FBI director J. Edgar Hoover, it remains in use today at FBI headquarters in Washington to safeguard what the bureau considers its most highly sensitive information.

But now, for the first time, the FBI has opened its doors — at least a crack — by releasing hundreds of pages of memos outlining why bureau officials have deemed certain information too hot to handle even for most top-level officials.

The memos, spanning the 1950s to the 1980s, were approved for release under the Freedom of Information Act and provided exclusively to the Globe by a researcher outside the FBI who wished to remain anonymous.

Many of the files that were kept there over the years, some designated with cryptic titles such as “raindrop’’ and “snitch-jacketing,’’ remain secret — if they haven’t been destroyed, as one former FBI official speculated.

Yet the internal memos discussing the file room and its contents provide a unique window into what the FBI considered some of the most serious domestic security threats, both real and imagined.

On several occasions, the room, which only designated officials could access, became so overcrowded that the contents had to be moved to a larger space out of fear that the Justice Department building where it was first housed could not withstand the weight.

“These 26 cabinets are presently in one room and because of this weight factor must be moved immediately,’’ one Sept. 13, 1961, memo warned. Several years later, another memo reveals, it grew to 79 file cabinets.

Indeed, in the opinion of FBI officials, the room was quickly abused. “Some of these files contain no indication as to why, when, or by whom they were placed in this restricted status,’’ one memo, dated May 15, 1952, stated.

“This was a collection of things that the bureau didn’t want to be part of the regular filing system because it was considered highly sensitive,’’ John Fox, the FBI’s official historian, said in an interview.

Others who have studied the FBI say the special filing location, at times also referred to as the “confidential file room,’’ has also served as a way to protect information about bureau activities that may have been unlawful, such as spying on Americans without probable cause.

“This was a system that allowed FBI officials to say we have searched our central records system and there is no record of illegal conduct’’ by the bureau, said Athan G. Theoharis, a former professor at Marquette University and a specialist on the reign of Hoover, who served as the agency’s first director, from 1924 to 1972, and who is known to have maintained his own files that he ordered destroyed after his death.

A majority of the files appear to be related to highly classified activities. Many are excluded from guidelines that require the government to declassify documents after a certain period of time.

Some subjects are considered so secret that even the bureaucratic machinations for putting them into the secret file room were blacked out — such as memos discussing the files about potential spies for China operating in the United States.

In the early years of the Cold War, the FBI began placing thousands of other documents relating to security matters into the special file room, according to Fox and other specialists.

Stashed away were plans to conceal US radars designed to spy on the Soviet military, details of American war plans, and evacuation plans should Washington be attacked. There were several files on the possible threat of smuggled nuclear weapons, including one labeled “Atomic Bomb in Unknown Consul.’’

The room was filled with files on Americans believed to be spying for Russia, including Julius Rosenberg, who was executed for selling atomic bomb secrets, and Morton Sobell, an American engineer who spent nearly 18 years in prison for spying for the Soviet Union.

Some of the documents, meanwhile, indicate that the United States was spying on friends during the height of the Cold War. A number of files contained the diplomatic codes of Greece, Panama, Guatemala, Dominican Republic, Nicaragua, Sweden, and even neutral Switzerland, allowing the United States to read secret communications between their diplomats.

Others were more questionable in nature, such as numerous files from the 1950s and 1960s detailing the FBI’s spying on early gay rights groups such as The Mattachine Society, which in one 1958 memo was categorized under “internal security.’’

Homosexuality, in fact, was for a lengthy period an obsession of the bureau and the focus of multiple domestic intelligence operations, the memos show. Another file was spirited out of the regular bureau filing system because it involved “allegations of homosexuality of some very prominent individuals.’’

It added: “In view of the obscene nature of the allegations and the prominence of some individuals mentioned, therein, it is felt that this file should be retained in the Special File Room.’’

Other files on domestic spying that were routed to the special file room involved “black nationalist extremists.’’ There were also files about an “extremely sensitive counterintelligence technique’’ called snitch-jacketing, which apparently involved the FBI spreading false information that members of a targeted group were government informants in order to sow conflict within their membership.

“Secrecy was the key,’’ Theoharis said. “Knowledge is power.’’

The special filing location was even used to protect information about politicians believed to be involved with criminals.

“The information is of a very sensitive nature in that it contains frequent reference to highly placed persons in Chicago law enforcement as well as city, county, and state political figures and their relations with the hoodlum element,’’ one 1960 memo stated, requesting a file be routed to the special room. “References are also made to prominent businessmen and occasionally newspaper reporters.’’

Longtime observers of the FBI say the memos are not just historically valuable, but also provide a roadmap for researchers who can now request some of the files cited in them, at least those with titles or file numbers that appear in the newly released documents. The memos will be posted at governmentattic.org, a website run by volunteers that publishes hundreds of government documents released under the Freedom of Information Act.

But according to Susan Rosenfeld, former FBI historian, many of them have been destroyed as part of regular housekeeping or are no longer stored at the FBI but at other government records centers.