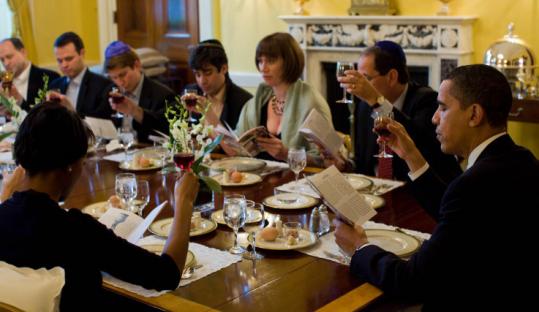 WASHINGTON — One evening in April 2008, three low-level staff members from the Obama presidential campaign — a baggage handler, a videographer, and an advance man — gathered in the windowless basement of a Pennsylvania hotel for an improvised Passover Seder.

The day had been long, the hour was late, and the young men had not been home in months. So they had cadged some matzo and Manischewitz wine, hoping to create some semblance of the holiday.

Suddenly they heard a familiar voice. “Hey, is this the Seder?’’ Barack Obama asked, entering the room.

So begins the story of the Obama Seder, now one of the newest and least likely of White House traditions. When Passover begins at sunset tomorrow evening, Obama and about 20 others will gather for a ritual that neither the rabbinic sages nor the Founding Fathers would recognize.

In the Old Family Dining Room, the mostly Jewish and African-American guests will recite prayers and retell the biblical story of slavery and liberation.

If last year is any guide, Malia and Sasha Obama will take on the duties of Jewish children, asking four questions about the night’s purpose — along with a few of their own — and scrambling to find matzo hidden in the gleaming antique furniture.

That event was the first-ever presidential Seder, and also probably “the first time in history that gefilte fish had been placed on White House dishware,’’ said Eric Lesser, the former baggage handler, who organizes each year’s ritual.

The first one took place at the bleakest point of the campaign, the long prelude to the Pennsylvania primary, which was dominated by a furor over Obama’s former pastor. “We were in the desert, so to speak,’’ remembered Arun Chaudhary, then and now Obama’s videographer, who grew up attending Seders with his half-Jewish, half-Indian family.

No one led the proceedings; everyone took turns reading aloud. Obama had brought Reggie Love, his personal aide, Jarrett, and Eric Whitaker, another close friend, all African-American. Jennifer Psaki, the traveling press secretary, and Samantha Tubman, a press assistant, filtered in.

The same group, with a few additions, has now made the Seder an Executive Mansion tradition. But maintaining the original spirit has been easier said than done.

Tubman and Desiree Rogers, then the White House social secretary, tried to plan an informal meal last year, with little or even no wait staff required. White House ushers reacted with what seemed like polite horror. The president and the first lady simply do not serve themselves, they explained. The two sides negotiated a compromise: The gefilte fish would be preplated, the brisket passed family-style.

Correction: Because of a reporting error, an earlier version of this story misspelled the name of White House assistant Herbie Ziskend.