US girds for more violence in Kabul 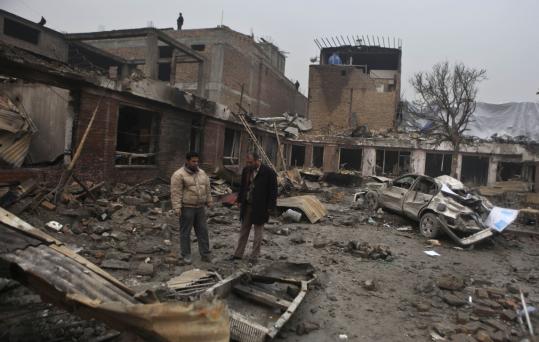 People stood in the compound of a damaged guesthouse in Kabul, the day after suicide attacks in February. There were 26 attempted attacks using improvised explosives in Kabul last year. (Altaf Qadri/Associated Press)
By Bryan Bender Globe Staff / March 26, 2010

WASHINGTON — Insurgents are preparing a campaign of suicide bombings and other high-profile attacks in the bustling but poorly protected Afghan capital of Kabul this summer, posing a new threat to the fragile Afghan government and the recent military gains of the American-led counterinsurgency, according to several US officials and advisers briefed on recent intelligence reports.

The prospect of an Iraq-style spate of bombings in Afghanistan’s most populous city, which so far has been spared much of the violence, could draw forces away from the main effort to beat back the Taliban in the south of the country, where most US reinforcements have been dispatched this year, the officials said.

The warnings are prompting commanders to step up intelligence-gathering efforts on possible sanctuaries in both Afghanistan and Pakistan to monitor the supply lines for moving bombers and explosives into the capital, though the officials said they fear the Afghan government and its coalition partners are ill-prepared.

One top US defense official, who spoke on the condition he not be named when discussing sensitive security matters, described new “intelligence streams’’ that are pointing to one particular insurgent group allied with both the Taliban and Al Qaeda: the Haqqani Network, which operates out of Pakistan and has already been tied to a series of high-profile attacks, including a citywide assault in Kabul earlier this year using foreign recruits wielding small arms and an ambulance rigged with explosives.

“There is a real, serious danger that they will try to escalate these spectacular attacks,’’ said Max Boot, a senior fellow at the Council on Foreign Relations who has advised the top US commander in Afghanistan, General Stanley A. McChrystal. “I think it would undermine confidence in the [Afghan] government. The Afghan government has to do a lot more to harden Kabul like what was done in Baghdad.’’

Kabul, with an estimated 3 million people, is defended mostly by Afghan security forces and a small contingent of Italian, Spanish, and other NATO troops and is considered a “soft target’’ due to minimal fortifications around key government buildings and a limited network of checkpoints along approaches to the city. Still, to date it has enjoyed relative security as the Taliban insurgency has gained strength in the south and east of the country.

According to the Afghanistan Index, compiled by the nonpartisan Brookings Institution in Washington, there were 26 attempted attacks using improvised explosives in Kabul last year, compared with 636 in the eastern part of the country and 480 in the south.

Still, the number of attempted attacks in Kabul more than doubled. And although some officials doubt that insurgents could inflict anywhere near the level of violence in 2006 that seized Baghdad, which suffered thousands of casualties from suicide bombings attributed to the group Al Qaeda in Iraq, the destructive power of the bombings in Afghanistan is on the rise.

Lieutenant General Michael Oates, who oversees US efforts to combat so-called “improvised explosive devices,’’ testified to a House committee last week that the lethality of attacks in Afghanistan has increased 50 percent over the past three years, including the size of the explosives.

Specialists believe Kabul is already becoming a more appealing target for the Haqqani Network, so named for its leader, Jalaluddin Haqqani, and considered one of the most sophisticated of Afghanistan’s insurgent groups.

The group dates to the Soviet occupation of Afghanistan in the 1980s and has strong links with the Al Qaeda terrorist leadership and its pool of young foreign recruits. From its radical religious schools and training camps in North Waziristan in Pakistan’s lawless tribal region it has recruited Afghans, Pakistanis, Arabs, and others to carry out a series of attacks in the past two years, including the simultaneous bombings of government buildings in the city of Khost, a suicide attack on the Indian Embassy in Kabul, and an attempt to bomb the motorcade of the Afghan president, Hamid Karzai.

The group has extended its reach to more Afghan provinces, including those adjacent to Kabul.

“The network is responsible for conducting spectacular attacks within the provinces of Khost, Paktia, Paktika, Logar, Kabul, and increasingly in areas like Nangarhar, and Kunar,’’ said Matthew Dupee, an Afghan security specialist at the Naval Postgraduate School in Monterey, Calif. “This puts Kabul directly in the cross-hairs.’’

It also appears to have an “ample supply of willing suicide bombers and tactically dedicated fighters,’’ he added, and is believed to receive help in planning attacks from corrupt officials inside the Afghan Ministry of the Interior, which is responsible for police forces, as well as the Ministry of Defense. In recent months Afghan Army personnel have been indicted for having connections to the militant group.

The United States has stepped up operations against the group; in late February, a suspected US drone strike reportedly killed Muhammad Haqqani, the son of the group’s founder, in Pakistan.

But with the bulk of US and Afghan forces targeting Taliban forces in southern Afghanistan, it remains capable of operating relatively freely in large swaths of Afghanistan, according to a recent research paper published by the Institute for the Study of War, a Washington think tank.

Military and intelligence officials and outside specialists say a stepped-up campaign in Kabul could have a variety of consequences. It would draw scarce resources away from the primary focus on insurgents elsewhere in the country, including Khandahar, Afghanistan’s second-largest city and the traditional homeland of the Taliban. US forces say they will launch a major offensive there in the coming months.

The attempt could also backfire on the militants, however, by alienating the Afghan people and further increasing support for the government and US-led military forces.

“Suicide bombing kills huge numbers of civilians. The greatest risk to them is that they will destroy any public support they might have had,’’ said Stephen Biddle, a senior fellow at the Council on Foreign Relations who also advises McChrystal on military strategy.

Biddle and others believe insurgents are willing to take such a risk if they can pull it off. “They may feel like they have nothing to lose anyway,’’ Biddle said.

Dupee, for his part, believes such a Kabul offensive could crumble the US-led coalition, including leading some NATO countries to pull out of the war.

“Any type of high casualty rate among Italian or Spanish forces could prompt massive scale downs or withdrawals,’’ he said.