No direct legal precedent for order to buy insurance 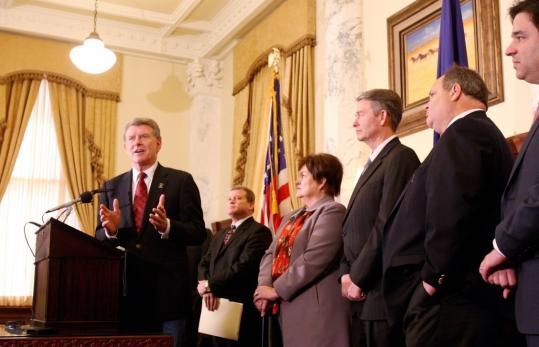 Attorneys general in 14 states have filed suit against the health care bill on grounds that it is unconstitutional. Governor C.L. Otter of Idaho spoke to reporters after his state joined the suit. (Joe Jaszewski/The Idaho Statesman via Associated Press)
By Michael Kranish Globe Staff / March 25, 2010

WASHINGTON — A flood of lawsuits from states seeking to block the health care law President Obama signed this week raises sharp questions about the power of the federal government to impose mandates on its citizens, but legal scholars disagree about how the cases will be decided if they are heard by the Supreme Court.

Analysts said there is no direct precedent for Congress requiring that individuals purchase a product such as health insurance, although some indirect cases are cited by advocates on both sides.

“It really is something that hasn’t happened before in the same way, and that just adds to the unpredictability,’’ said Carl Tobias, a University of Richmond law professor who said it could come down to a 5-to-4 vote in the Supreme Court, which has a slim majority of conservative justices.

The question falls squarely on centuries-old constitutional debates about the reach of the federal government in state affairs. Legal scholars on the right contend requiring citizens to obtain health insurance is a case of excessive federal intrusion and should be overturned by the judicial branch, while liberal judicial experts say Washington’s power to require that Americans buy insurance is clearly permitted under commerce and taxation provisions in the constitution.

Attorneys general in 14 states have filed suit against the health care legislation on grounds that it is unconstitutional. While the claims vary, a chief argument is that there is nothing in the Constitution that allows the government to require individuals to purchase anything. Lawsuits are also likely to be filed by insurance companies and individuals.

“Unless the bill is repealed, the various aspects of this will be tied in court for a generation,’’ predicted Todd Gaziano, director of the Center for Legal and Judicial Studies at the conservative Heritage Foundation, who believes the legislation is unconstitutional.

But the bill’s supporters say it is constitutional under a clause allowing the government to regulate interstate commerce, citing an array of legislation in which the federal government has ordered individuals to take a variety of actions, such as upholding a 1964 law that ordered businesses not to discriminate against African-Americans.

The lawsuits “are totally frivolous,’’ said Simon Lazarus, public policy counsel for the National Senior Citizens Law Center, who has studied the issue for the left-leaning American Constitution Society. “I’m confident they will be summarily dismissed by even the most conservative judges.’’

Even before the broader constitutional conflicts are decided, the matter could get bogged down in tactical court battles for years. There are many routes that legal challenges are likely to take, potentially stalling or preventing implementation of the law. Opponents of the legislation are hoping that a federal district judge can be persuaded to impose an injunction against the legislation until the matter is heard in court. The injunction would then be appealed, and the case and others like it would wind through various federal courts before reaching the Supreme Court.

Among the states filing lawsuits against the federal government is Virginia, where the legislature earlier this month approved a bill that exempts Virginians from a federal or state health insurance requirement. Governor Bob McDonnell, the recently elected Republican, held a public signing ceremony yesterday. Similar legislation has been filed in at least 32 states.

McDonnell called the federal legislation “an unprecedented federal mandate on individuals that we believe violates the US Constitution.’’

Proponents of the federal health bill note that the matter most likely to face a legal challenge — the mandate to buy insurance — will not go into effect until 2014. As a result, Obama administration lawyers are likely to argue that federal courts cannot block something that has not yet gone into effect.

The outcome of the court fight would not alter the right of a state to impose rules on its citizens. Thus, the 2006 Massachusetts law that requires most citizens to health insurance would not be affected.

On the question of such a requirement at the federal level, the nonpartisan Congressional Research Service examined the issue recently and said it is a “novel’’ concept that has yet to be decided by the Supreme Court.

Proponents of the health care mandate cite a 2005 ruling by the Supreme Court that they say provided the legal groundwork for the legislation. In that case, Gonzales v. Raich, the court said the commerce clause of the constitution gave Congress the right to ban the growing of marijuana, even if states allow its use on medicinal grounds. The Supreme Court said Congress had such authority even though the marijuana at issue was being home-grown for personal use and was not being sold across state lines. To proponents of the health care legislation, this decision means that Congress has broad power of regulatory authority.

But opponents dispute the relevance of Gonzales v. Raich when the question is forcing citizens to buy a product, such as insurance.

Scholars on both sides say the cases could define the limits of federal power.

“If this precedent is established, Congress would have the unlimited power to regulate, prohibit, or mandate any or all activities in the United States,’’ according to a Heritage Foundation analysis co-written by Gaziano. “Such a doctrine would abolish any limit on federal power and alter the fundamental relationship of the national government to the states and the people. For this reason it is highly doubtful that the Supreme Court will uphold this assertion of power.’’

But Jack Beerman, a Boston University law professor, doubted that the Supreme Court would kill the health insurance mandate.

“The reason people are having trouble finding a precedent for this is because there is no precedent for holding this unconstitutional,’’ said Beerman. “It would be an unprecedented move having the Supreme Court striking this down.’’

Moreover, the legislation was designed to defeat the constitutional arguments of health care opponents by imposing a penalty in the form of a tax on those who do not buy insurance. The Constitution clearly and indisputably gives the federal government the power of taxation.

In addition to the argument against the mandate, the bill is also being fought on grounds that it undercuts states’ rights, that it fails to provide enough money to the states to pay for new benefits, and that it is an intrusion on the business practices of insurance companies.

The Obama administration yesterday continued to mount a defense of the legislation.

“We will vigorously defend the constitutionality of the health care statute along with any other claims or litigation,’’ Justice spokesman Tracy Schmaler said. “We are confident that the statute is constitutional and will prevail when we defend it in court.’’