With the vote, a new stature for Obama 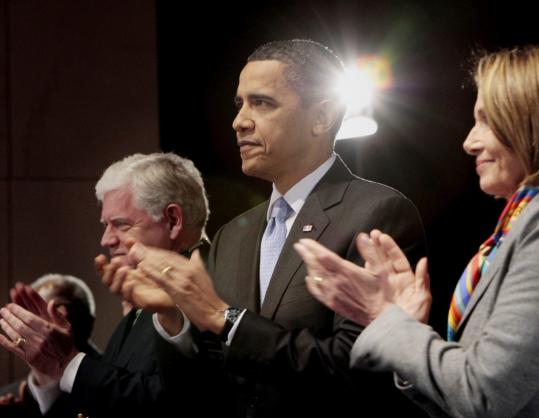 WASHINGTON — President Obama scored a stunning political and legislative victory on health care last night that not only will earn him a place in history books, but promises to establish him as a stronger leader of the Democratic Party after a tumultuous first year.

Even Obama loyalists grumbled last year about the president’s early approach to handling the health care debate, complaining that he allowed Republicans to seize control of the debate and failed to discipline bickering Democratic House and Senate members whose inaction threatened to kill the bill.

But once the unexpected election of GOP Senator Scott Brown in January’s Massachusetts special election left Democrats dispirited and groping for a new strategy, Obama rallied. The president displayed fresh political acumen that brought momentum back to the Democrats and resurrected their centerpiece domestic issue, lawmakers and political specialists said, helping the House pass a broad overhaul measure last night.

Just two months ago his administration appeared to be struggling. Now, in the face of intense adversity, he is about to achieve a goal that has eluded presidents for decades.

“I believe this truly is a game-changer,’’ said former senator Harris Wofford, who won Pennsylvania’s 1992 Senate race by campaigning in favor of expanded health coverage.

“Some were saying the bloom was really off the rose,’’ said Roger Wilkins, a historian and author who served as an assistant attorney general in the Johnson administration. “There’s a ‘Bambi’ quality to him. When you look at him, there’s this lithe young man who likes to play backyard basketball.

“I think that everybody who thought that Bambi had moved into the White House knows that’s not true today.’’ Wilkins continued. “He is one tough fellow, and he has proved himself to be pretty good at politics as well.’’

Obama still must sign the broad bill the House passed last night, and the Senate must approve a reconciliation package of compromise repairs. Republicans insist that even if Obama and the Democrats win, they will lose in November, punished at the polls by an angry electorate.

“It’s time to listen to the American people, and that is the stunning thing about this,’’ House Minority Whip Eric Cantor, Republican of Virginia, said on ABC’s “This Week.’’ “There will be some members who will lose their seat. This is a legacy vote; there’s no question about it.’’

If the Senate approves the compromises in the measure as soon as this week, as Democrats have promised, the president will continue to be tested as he attempts to persuade a divided American public of its benefits. By moving the package with Democratic votes alone, “they’ve totally divided the country,’’ and it will be difficult for Obama to calm voters before November, said Doug Schoen, a Democratic pollster who worked for former President Clinton.

“All the energy in a turnout election is with the opponents of the bill,’’ Schoen said.

The win boosts Obama’s standing with his liberal base, which had grown increasingly frustrated over the president’s inability to push through their wish-list, including health care overhaul, a climate change bill, and the closure of the prison at Guantanamo Bay. A reinvigorated Democratic party — although still facing likely losses in November’s mid-term elections — is now better positioned to galvanize support for the rest of Obama’s domestic agenda, including legislation aimed at job expansion, energy, financial regulation, and immigration.

“It’s extraordinarily important, and will give him momentum on other legislation,’’ said William Leuchtenburg, a presidential scholar and author based in North Carolina. “He will be able to say he did what the campaign promised: to bring change. He will be able to succeed in a way that a series of presidents, including [Harry S.] Truman and [Bill] Clinton failed.’’

The journey was a brutal one, and the process ugly. But although the bitterness on Capitol Hill may not be healed when the legislative debate over health care is finished, Obama would have earned a place in the history books as the only chief executive in 60 years to win a bill bringing the nation close to universal coverage, historians said.

“You have to say this about him: He put all his chips on the table’’ to move his chief domestic priority, Wilkins said. “It makes Obama a huge, huge figure in American history. Not only was he the first black president, but he is a young president who could make things happen.’’

The package is still a risk, even if it is signed into law. If people are unhappy with how the plan is working over the next few years, Obama’s reelection and legacy are at stake, said Ross Baker, a Rutgers University political science professor.

As he embarked last year on providing coverage to more than 30 million people without insurance and imposing new rules on the industry, Obama faced myriad challenges that had vexed his predecessors. Health care overhaul advocates argued that the crisis had deepened with each decade. Private health insurers, which had continued building power on Capitol Hill after they defeated Bill Clinton’s efforts to reform the system, were willing to compromise on some points, but they vowed to fight on others, such as Democrats’ desire for a public, government insurance option.

The death of Senator Edward M. Kennedy of Massachusetts last August deprived Obama of his lead health care strategist in the Senate, where Kennedy himself had spent decades fighting for health care overhaul.

Obama also drew criticism last year for taking a low-key leadership role. Mindful of the failed strategy of the Clinton administration, which wrote its own health care bill and delivered it to a skeptical Congress, Obama deliberately left the details of the package to lawmakers, giving Congress ownership of the bill but also exposing the messy legislative process to the public and opponents.

After months of criticism from Republicans, the industry, and tea party activists, the Senate vote to approve a compromise health bill with no public option on Christmas Eve set off a fresh frenzy of anger in an electorate weary of the recession and high unemployment. Within weeks, Brown’s surprise election in Massachusetts to succeed Kennedy — after running strongly against the health care bill — took away Democrats’ 60-vote, filibuster-proof majority in the Senate. Health care legislation stalled.

But Obama upped the ante, shifting strategies by assuming a stronger leadership role. On Feb. 25, he hosted an extraordinary seven-hour health care forum with Democrats and Republicans, broadcast live on television. Billed as a chance to listen to GOP ideas, it proved to be a shrewd political maneuver. It laid the groundwork for use of a controversial tactic called “budget reconciliation’’ to ram a health care bill through the Senate over the objections of Republicans.

Former senator David Durenberger, a Minnesota Republican who favors the health care bill, said Obama should travel the country, explaining the bill to segments of the electorate.

“In the end, if he does this right, he makes up for a lot of wasted time, a lot of acrimony,’’ Durenberger said.