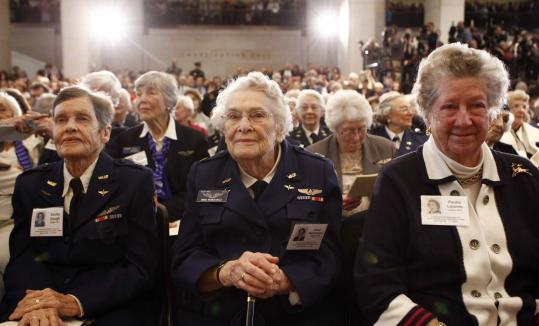 About 200 women who served as Airforce Service Pilots were present to receive the highest civilian honor given by Congress. (Kevin Lamarque/ Reuters)
Associated Press / March 11, 2010

WASHINGTON — They flew planes during World War II but were not considered real military pilots. No flags were draped over their coffins when they died on duty. And when their service ended, they had to pay their own bus fare home.

Yesterday, these aviators — all women — received long-overdue recognition. They were presented the Congressional Gold Medal, the highest civilian honor given by Congress, in a Capitol Hill ceremony.

About 200 women who served as Women Airforce Service Pilots, or WASPs, were on hand to receive the award. They are mostly in their late 80s and early 90s now, and some came in wheelchairs. Many wore dark blue uniforms, and one, June Bent of Westborough, Mass., clutched a framed photograph of a deceased comrade.

As a military band played “The Star-Spangled Banner,’’ one of the women stood up from her wheelchair and saluted through the entire song as a relative gently supported her back.

“Women Airforce Service Pilots, we are all your daughters; you taught us how to fly,’’ said House Speaker Nancy Pelosi, the first woman to occupy her position. She said the pilots went unrecognized for too long, even though their service blazed a trail for other women in the military.

In accepting the award, WASP pilot Deanie Parrish, 88, of Waco, Texas, said the women had volunteered without expectation of thanks. Their mission was to fly noncombat missions to free up male pilots to fly overseas.

“We did it because our country needed us,’’ Parrish said.

WASP Ty Hughes Killen, 85, of Lancaster, Calif., put it more simply: “We’re a bunch of tough old ladies,’’ she said in an interview.

Thirty-eight WASPS were killed in service in World War II. But they were long considered civilians, not members of the military, and thus were not entitled to the pay and benefits given to men.

They were afforded veteran status in 1977, only after a long fight. It is estimated that about 300 of the more than 1,000 WASPs are still alive.