Cite his refusal to intervene on D.C. licenses View marks shift from 10 years ago 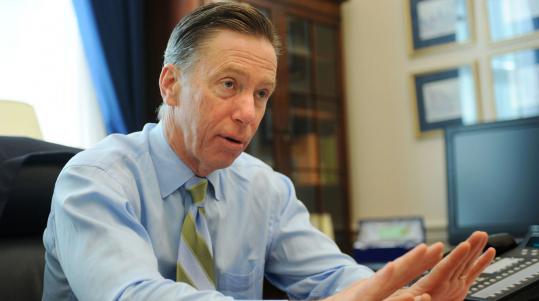 WASHINGTON - In the 2001 special election that sent US Representative Stephen F. Lynch to Washington, the South Boston politician was accused of being hostile to gay rights. A decade later, the low-key lawmaker is winning praise from gay-marriage advocates in the nation’s capital.

Lynch is chairman of the House Committee with oversight over the District of Columbia, the sort of post socially conservative members of Congress have used to push a social agenda on the city and score points with religious voters at home.

But Lynch - rebuffing entreaties from House Republicans to intervene - met the city’s decision to license gay marriages with a shrug. This has delighted city officials and activists, who say Lynch did the right thing by butting out.

“He has taken a hands-off approach,’’ said Mike Panetta, an activist for self-government in the District of Columbia, which is not a state and whose local laws are ultimately subject to the whims of Congress. “Someone in his position previously would have held a hearing or done something to stop this from happening.’’

Lynch said that while his views had shifted to support gay marriage since his election to Congress, his role in allowing gay marriage to become law in the district stems more directly from a belief that the city deserves a greater degree of autonomy.

Either way, gay rights activists in Massachusetts are thrilled.

“Stephen Lynch is a wonderful example of a legislator who has evolved,’’ said Arline Isaacson, cochairwoman of the Massachusetts Gay and Lesbian Political Caucus, which endorsed one of Lynch’s opponents in his first campaign. “It makes a huge difference to have a legislator who comes from such a conservative background be on our side.’’

The district joins Massachusetts and four other states that allow gay marriage. Applications were accepted starting lastWednesday, and the first licenses were issued yesterday. Advocates hope that the symbolism of gay marriage in the nation’s capital will help revive momentum for a movement that has suffered setbacks recently in Maine and California.

Not everyone is happy. Representative Jason Chaffetz of Utah, the ranking Republican on Lynch’s committee, led an unsuccessful effort to either block gay marriage in Congress or force the District of Columbia to hold a referendum on the issue.

“Congress has a unique constitutional role overseeing D.C.,’’ he said. “I wish we would take up some of the more difficult issues like gay marriage and put it up for a vote. The Democrats are afraid to have this come up for a vote, because they know traditional marriage would win.’’

As recently as 2006, the city dropped plans to allow gay marriage after Senator Sam Brownback, Republican of Kansas - who then controlled the Senate panel with jurisdiction over the district’s budget - warned against it. Congress also blocked a domestic partnership law passed in 1992 from going into effect until 2002. But this time, a bill backed by dozens of Republicans and a few conservative Democrats to bar gay marriage in the district never received a hearing in Lynch’s committee.

“I’m trying to respect the local government here,’’ Lynch said in an interview in his Capitol Hill office, noting the City Council had approved gay marriage overwhelmingly. “It wasn’t a close vote.’’

A former ironworker and labor lawyer known on Capitol Hill for his gruff South Boston accent, Lynch was attacked by his primary opponents in 2001 as too socially conservative for Massachusetts. Lynch opposes abortion rights, and as a state lawmaker had opposed partner benefit and hate crimes legislation favored by gay-rights advocates. He won the primary with support from union members and Boston residents, while three other candidates split the liberal vote.

Since then, though, Lynch’s voting record on most issues has been almost indistinguishable from his Massachusetts Democratic colleagues. He did tie for the lowest ranking in the state in ratings compiled last year by the liberal group Americans for Democratic Action - but that was with a score of 95 out of 100.

“Calling me the least liberal member from Massachusetts is like calling me the slowest Kenyan in the Boston Marathon,’’ he said. “It’s all relative.’’

The panel Lynch leads, officially the Federal Workforce, Postal Service, and the District of Columbia Subcommittee, also has jurisdiction over the Postal Service and federal employees. Tom Davis, a former Republican congressman from Virginia who once chaired the committee and was one of the district’s rare GOP allies, said it was considered a hardship posting by many lawmakers because it provided few opportunities to bring home the bacon to their own districts.

And that has historically caused headaches for the city, because members dragooned onto the panel have tried to use one of the only powers available to them - interfering in Washington city politics - to make news back home. City leaders have seethed in the past as lawmakers in far away states meddled in everything from taxi fares to school policy.

“The district provides a platform for people who have strongly opposing views to impose their views on the city and beat their chest back home and say, ‘I did this,’ or ‘this is what I prevented the district from doing,’’ said Ilir Zherka, the executive director of DC Vote, an advocacy group that supports statehood. “It’s also been a place where new members of Congress, they use this as a platform for gaining notoriety. Chaffetz is a classic example.’’

Under the Constitution Congress has virtually unlimited power over the district, but Lynch said that as chairman he wanted to limit involvement in the city’s affairs. Lynch said he supports giving the district voting representation in Congress, and also backs legislation that would remove some layers of congressional review for the city’s laws and budget.

“I thought we definitely needed to relax a little bit,’’ said Lynch, who lives in a condo on Capitol Hill when he is in Washington and says he has spent the past several weeks tutoring snowbound locals on how to reserve parking spots with chairs. “We generally try to let D.C. govern themselves.’’

In one issue that has raised concerns among Republicans, Lynch has declined GOP requests to investigate the district’s AIDS program after a Washington Post series last year alleged corruption. Lynch said that the investigation should be left to local authorities, but that his office continued to monitor the situation.

Lynch said he does not back outright statehood for Washington, but is sympathetic to the widespread sense of frustration in the city, manifested in a billboard outside City Hall showing the amount of taxes paid by district residents and the “Taxation Without Representation’’ motto on the city’s license plates. (The city also asked to have the logo put on the city’s quarter, but the mint refused.)

Delegate Eleanor Holmes Norton, the district’s nonvoting member of Congress, said she thought Lynch’s background representing South Boston made him more attuned to the city’s resentment of outside meddling.

“I have never seen any sign of a Lynch agenda for the District of Columbia - much to his credit,’’ she said.