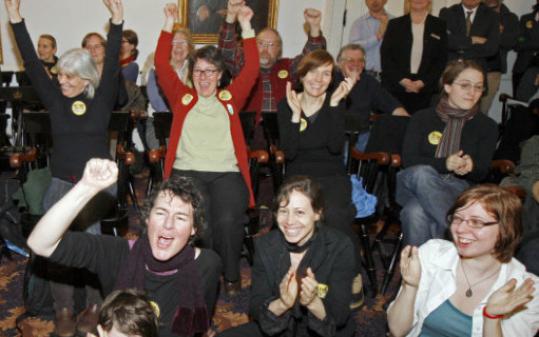 WASHINGTON - President Obama’s plan to kick-start the construction of nuclear power plants in the United States comes with a big catch: Because private banks won’t lend to an industry viewed as financially risky, taxpayers would be accountable for billions in government-guaranteed loans if plant developers default.

Precisely how much risk the public would carry remains a subject of lobbying by the industry, which is trying to minimize its financial exposure as the political climate in Washington has warmed in its favor.

Obama said last week that his administration had conditionally awarded a loan guarantee for the construction of two nuclear reactors at a plant in Georgia and said he wants to fund many more such projects under a program that could exceed $50 billion. But critics said the president has failed to address the potential liability to taxpayers for such loans.

“There is a huge potential risk for taxpayers,’’ said Autumn Hanna, who analyzes federal loan guarantees at Taxpayers for Common Sense, a nonparti san group. She said the risk could be in the tens of billions of dollars and said the public shouldn’t be asked to assume responsibility banks are unwilling to take.

To reduce taxpayer risk, the Obama administration wants nuclear companies to pay fees into a government-managed insurance fund to back the loans. But the administration has not said how large the premiums should be, and power companies are lobbying for the lowest possible rate to keep the program economically feasible. Suggestions have ranged from fees of 1 percent to 25 percent of the loan.

The nuclear industry, while acknowledging that taxpayer dollars will be at risk, said the downsides will be minimized by a combination of factors, including new, safer reactor designs that will enable companies to deliver projects on time and on budget.

“Of course there’s risk; there’s risk in any project,’’ said Leslie Kass, senior director of business policy and programs at the Nuclear Energy Institute, the industry’s lobbying group. “But it is a calculated risk, and we think it is a low risk.’’

Kass said she could not provide an exact estimate of the risk to taxpayers because such calculations have not yet been made. But she said that companies will typically have 20 percent or more in equity in the project so that they would do everything possible to avoid defaulting.

Banks have been reluctant to lend money for new nuclear projects due to a combination of concerns about cost overruns, past defaults, and the uncertain regulatory climate and political hostility that have shadowed the industry since the Three Mile Island accident in 1979.

But in a quest for energy sources that do not contribute to global warming, Obama and some other Democrats have joined with Republicans to back a renaissance in nuclear power production. The prevailing belief is that plant safety has improved dramatically and projects can be delivered on budget, providing thousands of high-paying jobs.

But there are significant uncertainties. The Washington Public Power Supply System, which sought to build nuclear reactors financed with municipal bonds, defaulted on those bonds in 1983 in a case that still hangs over the financing of such projects. In addition, the problem of where to put spent fuel, which remains highly radioactive, has not been resolved.

The Obama administration would extend government-guaranteed loans for as much as 80 percent of the costs of constructing new plants. It has said it wants to provide more than $50 billion in loan guarantees for nuclear projects, while the industry has said it would like at least twice that amount.

The Nuclear Energy Institute estimates that there are 28 proposed nuclear projects around the country that might seek the guaranteed loans. None of the proposals is for New England, where opposition to nuclear power has been stronger than in other regions such as the South. Among companies that are interested in new nuclear power plants are , , and

Critics of the loan program have questioned whether insurance premiums would be large enough to adequately protect taxpayers in the event of default on an expensive project.

“There is this inherent flaw with loan guarantees,’’ said Hanna of Taxpayers for Common Sense. “If terms are fair to taxpayers, the industry wouldn’t take it.’’

A spokesman for the Department of Energy could not provide an estimate of the risk to taxpayers.

“We have tried to minimize the risk to the taxpayers, but there is always risk when you provide a loan guarantee,’’ said Matt Rogers, an adviser to Energy Secretary Steven Chu. Rogers stressed that companies receiving the loan guarantee will undergo rigorous analysis to try to ensure that the projects are qualified and that the loans will be repaid.

“We believe the risk in this is minimal,’’ Southern spokesman Steven Higginbottom said, while vowing the money will be repaid.

Critics of the approach point to a 2003 report by the Congressional Budget Office that concluded that about half of proposed new power plants would wind up in default. But Chu said in a conference call on Feb. 16, “I don’t know of the CBO report. . . . We don’t believe the chance of default is 50 percent. We believe it’s far less than that.’’

An Energy Department official said later that the report was out of date, and the nuclear industry has dismissed the estimate as without merit.

The CBO also said, in a 2008 report, that by giving loan guarantees to nuclear power developers, it may cause the nuclear industry “to invest in excessively risky projects because they do not bear all the cost of a project’s failure.’’

Representative Edward Markey of Malden, a Democrat and the chairman of the subcommittee on Energy and the Environment, has urged Chu to make sure nuclear plants are certified as safe by the Nuclear Regulatory Commission before the loan guarantees are finalized.

“Congress needs to look very closely at the terms and conditions of any of these huge loan guarantees to ensure that the Department is doing everything possible to minimize the prospect that the taxpayers would ever have to bail out bad loans for new nuclear plants,’’ Markey said.