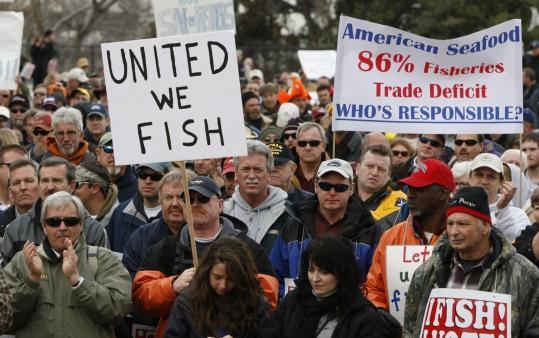 WASHINGTON - Fishermen and charter boat captains from Massachusetts to Florida rallied outside the Capitol yesterday to demand changes to a federal fisheries law they say is killing jobs and eroding fishing communities.

Participants in the “United We Fish’’ rally want to loosen catch restrictions they say are devastating their industry.

Bryan Lowery, of Tilghman Island, Md., said federal rules limit him to 400 pounds of scallops a day. Instead of his usual 100 fishing trips, Lowery said he expects to take just nine trips this year.

“They’ve just put us out of business,’’ he said, referring to the National Marine Fisheries Service, which put limits on the Mid-Atlantic scallop catch in order to recover vulnerable stocks.

Lowery called the rules particularly frustrating now because scallops are so plentiful near Ocean City, Md., where he fishes. “There’s no scarceness of scallops,’’ he said.

Similar complaints were offered by cod fishermen off the Massachusetts coast and those who fish for red snapper in the Carolinas. In Gloucester, Mass., “you can walk on the cod,’’ said Mayor Carolyn Kirk, one of the speakers at the lunchtime rally.

Eric Schwaab, assistant administrator for fisheries at the National Oceanic and Atmospheric Administration, said he was encouraged at the rally turnout.

“It’s great to see so many recreational and commercial fishermen all together,’’ Schwaab said.

Schwaab, however, defended the Magnuson-Stevens Act, which he said imposes necessary requirements for science-based annual catch limits to end overfishing on all stocks.

“Ending overfishing is the first step to allowing a fish stock population to rebuild to a level where the stock can be fished sustainably for the long term,’’ Schwaab said.

“We need to start caring as much about our fishermen as our fish,’’ said Schumer.

Schumer and Representative Frank Pallone, a New Jersey Democrat, have introduced bills to relax a provision in the law setting a strict 10-year goal of replenishing fish stocks.